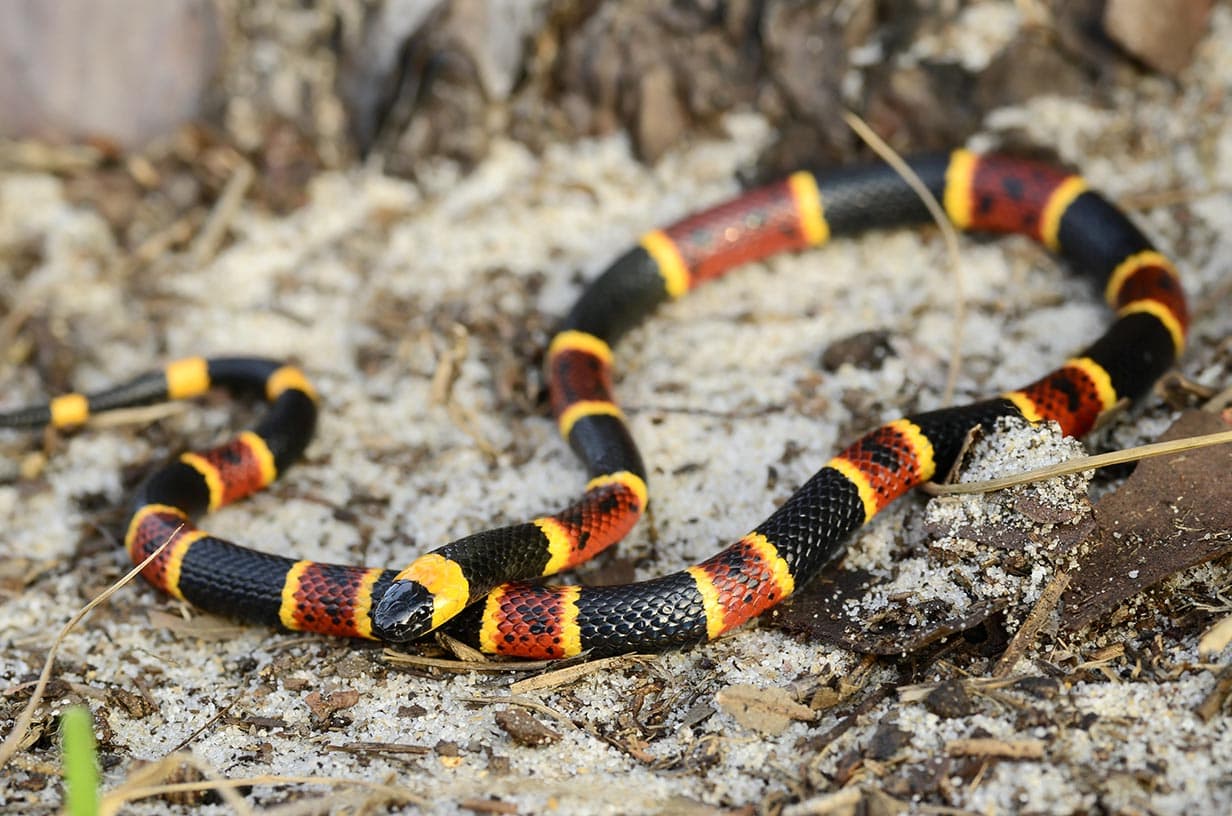 Luckily, for those of us who live in the United States, we don’t have many snakes with a deadly bite compared to other parts of the world. But we still have a few, like the coral snake and the copperhead, which can be quite deadly, and we have a lot of snakes that look like the deadly ones and can scare off predators without needing to use their bite.

Knowing the difference between a poisonous snake like the coral snake and a harmless snake that looks quite similar can be lifesaving. If you live in any of the southern states across America, you likely know the dangers of the coral snake. We will list several snakes that look like it and inhabit the same areas, which may cause you to mistake them for the real thing. For each one, we’ll show you what it looks like, provide a short summary of its behaviors, and tell how you can differentiate it from the poisonous variety so you can stay safe.

One of the first things you might notice about the deadly coral snake is that its nose is black and it has matching black bands on its body. There will also be red bands on the body, and yellow stripes will separate the red and black. Though you don’t want to be close enough to see them, you will notice the prominent fangs that non-poisonous snakes are missing if the snake opens its mouth.

Some southerners have come up with a clever rhyme to help you tell the difference between a poisonous coral snake and a lookalike.

“Red touching yellow will kill a fellow, but red touching black is safe for Jack.”

The scarlet kingsnake is easy to mistake for a coral snake because it has the red, black, and yellow stripes that we know to avoid. However, if you take a close look at this snake and remember our rhyme, you will see that the red band touches the black band, which is “safe for Jack.” The poisonous coral will have a yellow stripe separating the red and black. There are some other differences as well. The nose is red instead of black, and it has no fangs. The colors are a little darker than a coral snake, and there are traces of white alongside the red and black. These snakes like to live in rotting trees and are usually quite shy.

Florida scarlet snakes are similar to the scarlet kingsnake and have a nearly identical pattern. The reds are usually brighter, and the yellow is often muted and might appear white. It will have a red nose and be without fangs. The underside of the Florida Scarlet Snake is also white, unlike the poisonous coral whose band goes all the way around the body. One thing it has in common with the coral is that it likes to burrow underground.

The last type of snake that closely resembles the coral snake is the red rat snake. This species is a type of non-venomous corn snake that you can find all over the United States. These snakes are often mistaken for coral snakes because of the red and yellow bands, but you will be able to tell it’s not because there are no black bands.

Where Do Coral Snakes Hide?

Coral snakes are a shy breed that will try to avoid you if it sees you coming and would much prefer you left it alone. Unfortunately, these snakes tend to hide in places where we catch them by surprise, like a woodpile or among rocks we might be climbing on while on a hike. They are in tall grass and like to stay by the tree line where there are multiple options for food.

Can I Pick Up a Non-Poisonous Snake?

If you correctly identify a snake as non-poisonous, you will not be harmed by picking it up. However, we recommend leaving the snake alone because you can be disturbing the snake’s habitat, and handling it can upset it. It’s also much too easy to misidentify a snake, and that is not a mistake you want to make. The information here is to help you identify a snake on your property from a distance, not to help you select snakes to pick up. Always use extreme caution when in the proximity of any snake and never get within striking distance without someone close by that can call for help. If you need to move a non-venomous snake, wear gloves and handle it gently. Put it in a suitable container until you can release it in an appropriate location.

Knowing the difference between a coral snake and a lookalike can help you quickly assess any danger you might be in if you see a snake during your daily activities. We recommend steering clear and giving all snakes plenty of space regardless of danger. Snakes are great for the environment and mean no harm. If they bite you, they are only trying to protect themselves. It’s too easy to misidentify the breeds because you only get to see them for a second, and the colors might be brighter or darker than you expected. One mistake can cost you your life, or at least a trip to the hospital.

We hope you have enjoyed our look into these copycat snakes and have learned how to tell the difference between them. If we have helped you stay safer, please share this guide to the four snakes that look like coral snakes on Facebook and Twitter.