Can A Horse Vomit? No. Here’s Why! – Interesting Nature 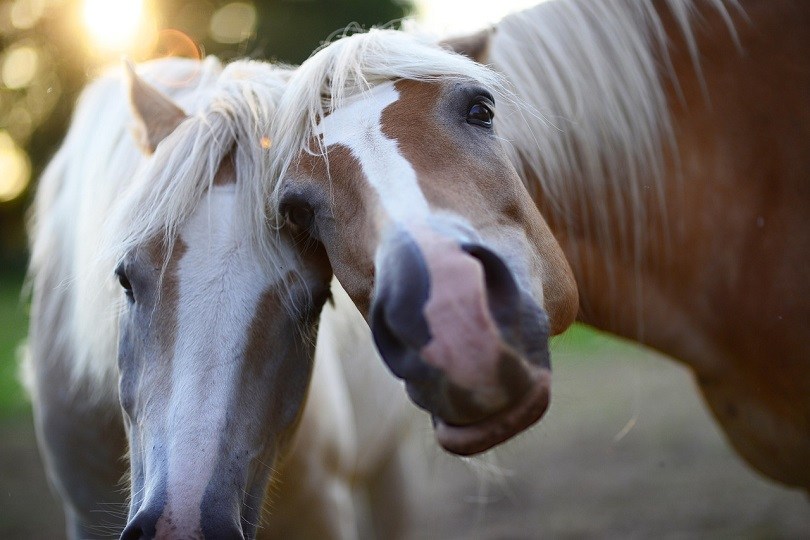 As most horse lovers know, horses can’t vomit. Although many people know this fact to be true, very few know why. After all, most other animals – including mammals, amphibians, reptiles, and birds – can vomit. Why not horses?

In this article, we are going to answer that question for you. The answer requires a breakdown of the horse’s anatomy so that you can understand why its body cannot throw up. We will also explain what this means for you, a horse owner. Let’s get started.

Most animals throw up whenever they eat something that upsets their stomach or is poisonous. Although this is common amongst almost all animals, the same is not true for horses. Horses cannot vomit, and you cannot force them to do so either.

Their Bodies Make It Nearly Impossible

Let’s begin with the first reason. In order for an animal to vomit, a coordinated sequence of reflective motions must all work together. As you probably know from experience, you need to take a deep breath, close your vocal cords, rise your larynx, and close off your airways to begin the vomiting process.

Then, your diaphragm contracts, loosening pressure. The abdominal walls contract to put pressure on the stomach. This in a sense opens the “doors” of your stomach, allowing the vomit to come up. It is only when all of these events happen in coordination that you can throw up.

Horses cannot throw up because their body is not designed so that food can go the opposite direction. Their food can only go down, not up. For example, horses have muscles that make it absolutely impossible to open the valve that makes it possible to throw up.

Similarly, a horse has an esophagus, but the esophagus joins in at a lower angle. Whenever the stomach is distended, it actually causes the valve to close even more, making vomiting even more difficult at that point. These are just some examples as to why horses cannot physically throw up.

They Do Not Need to Vomit For Survival

That brings us to the second reason. Why did horses evolve in such a way that they cannot physically throw up when almost all other animals can do so? Of course, we cannot give a distinctive answer to this question. We can only speculate.

Some people believe that it might be due to the fact that vomiting was used as a way to get toxins out of the body. Horses are pretty picky about what they eat and they only graze on pastureland. Very rarely do they come into contact with items that are toxic. As a result, they may not have developed the need to throw up since they aren’t exposed to toxic items often.

Another speculation has to do with how the horses run. Whenever a horse gallops, its intestines move and hammers on the stomach. In other animals, this would cause a vomiting response. In order for horses to run, however, the same must not be true of them.

Lastly, horses eat very different than other animals that vomit or regurgitate their food. Cows, for instance, regurgitate food so that they can eat it. Wolves and birds vomit their food for their young. Horses don’t do either of these things, meaning they do not need the reflex for survival.

Are There Reported Cases of a Horse Vomiting?

Even though horses are not designed to vomit, there have been some really rare cases of it being reported. Most likely, the vomiting experience was actually just the horse choking. This means that the item was stuck within the esophagus, causing the horse to eject the item from the esophagus, not the stomach. This is technically not vomiting.

Likewise, horses can regurgitate if it is extremely ill. Vomiting occurs whenever your body is in a reflective state. Regurgitation, on the other hand, happens whenever muscles are flaccid, causing the food to ooze from the mouth. This may appear like vomiting, but it is not the same process.

What Does This Mean for a Horse Owner?

Because horses don’t vomit, you might be wondering if this requires you to pay extra attention to your horse. After all, it does not have the means to throw up in the case that it should ingest something poisonous. Should you be on the lookout?

Of course, you should be careful to ensure not to feed your horse anything that is toxic. For example, don’t feed horses nightshades. They will have no way to get the food out of their system. Other than that, a horse’s inability to throw up does not make that much of a difference to the horse owner.

After all, horses have evolved this way for a reason. The animal does not necessarily need the ability like you or I would. As a result, you really don’t have to worry about your horse accidentally eating something it may need to throw up later.

Even though horses are built like us in many ways, one way that they are different is that they do not have the ability to throw up. This is largely due to the fact that their esophagus and stomach is very different from ours, resulting in the impossibility of a vomiting reflex.

Horses likely evolved this way because they don’t come in contact with poisonous items often. They also don’t need the reflex to feed their young, and they must be able to run without inciting a vomiting response. Because of this fact, it really isn’t that shocking that horses cannot throw up.

Check out some of our top-trending horse articles: