Home » OYE BAGGU » Male or Female Cockatiel? How to Identify the Differences (with Pictures)
OYE BAGGU

Male or Female Cockatiel? How to Identify the Differences (with Pictures) 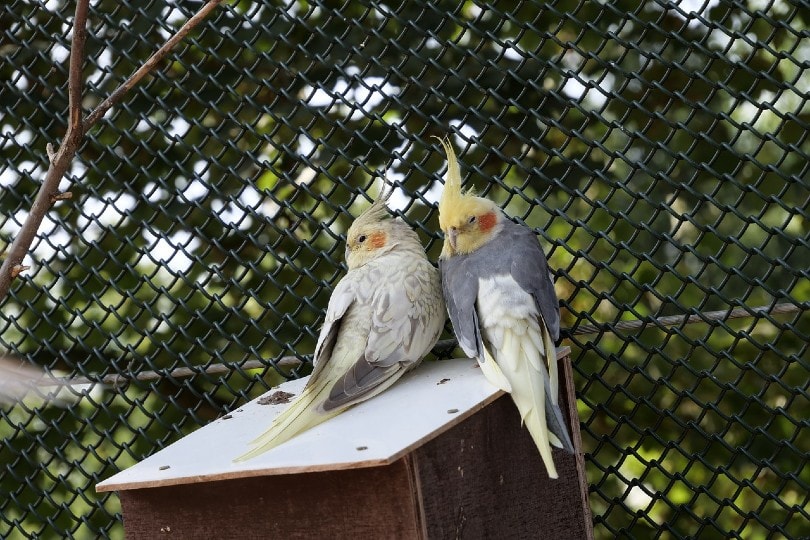 Cockatiels are serious contenders for being one of the most popular birds to own as a pet. And no wonder! They are beautiful birds with gentle and loving personalities. They are also charming, smart, and enjoy spending quality time with their owners.

If you’re trying to figure out if your cockatiel is female or male, however, this can be a little tricky. There are many bird species where it’s quite easy to tell the difference through appearance, and the cockatiel does have some physical characteristics that can help you figure out the gender. But there are certain color mutations that make this more of a challenge.

You can also look at behavioral distinctions, so read on, and we’ll go over the best methods for determining if your cockatiel is male or female.

At What Age Can You Tell the Difference in Gender?

Typically, by 6-9 months of age, young cockatiels have their first molt, eventually leading them to develop their adult coloration. This can also include behavioral changes that can point towards gender.

There are certain behaviors a chick could exhibit that might make you believe your cockatiel is male or female, but it’s usually best to wait until it comes into its adult coloring and behaviors.

If you have the more commonly colored cockatiel, such as the gray, fallow, silver, whiteface, or cinnamon, you can use the following as a guide. This relates only to adult cockatiels that have taken on their adult coloration:

These common cockatiels can be physically easy to tell the difference between the sexes, but we’ll have a look at some of the other color mutations.

Many of the color variations of the cockatiel make the ability to differentiate between males and females more of a challenge. In most cases, you’ll probably have to go by the behaviors instead.

When you can’t tell by the coloring, there are certain differences in behavior between the males and the females.

Male cockatiels are much more vocal than females. They tend to be quieter or don’t sing at all when they are young, but once they are around 6 months of age, they start singing and whistling and mimic certain sounds.

Females are less likely to vocalize, but that doesn’t mean that they never sing—they’re just a little quieter than the males.

Males are more likely to strut around—you’ll see them sticking their chests out while strutting and engaging in singing at the same time. You’ll see them lift their wings frequently while whistling and singing. They might also try to mate with other objects and toys. You can try placing a mirror in your cockatiel’s cage as males will be quite fascinated with their reflection, whereas females will lose interest quickly.

Females don’t take part in this type of showing off but will instead droop their wings down, raise their rear end and make soft cooing sounds.

Female cockatiels tend to be rather reserved and shy and might hold back if there’s a lot of noise and activity occurring. They will stay back and observe and make ready to fly away if they believe there is a threat.

They love cuddling up on their favorite human’s shoulder and will seek out your companionship a lot of the time. Many females can also be rather spunky.

Male cockatiels are typically curious, outgoing, and love to show off. They are definitely noisier and will also enjoy spending time with you as you go about your business. Males will gravitate to the parts of the cage where there is the most activity, including other birds and people.

He’ll even become animated both in hopping around as well as in whistling to get your attention. Male cockatiels are also not shy to display their dislike of anything, whether it’s for food or not gaining your attention.

The last resort is to get a DNA test done for your cockatiel if you can’t go by any physical or behavioral characteristics. You will need to either pluck a feather from your bird’s chest or take a blood sample (which can be accomplished by clipping the quick in the bird’s nail). You can ask your vet for a DNA kit, or you can order one online. You might be more comfortable asking your vet to gather the sample for you.

You can also have your vet try to sex your cockatiel but, in some cases, it can prove very challenging even for the most experienced veterinarians.

So, in some cases, it might be relatively easy to identify whether or not your cockatiel is a male or female, but in others, it’s almost impossible short of a DNA test. In many ways, unless you’re planning on breeding your cockatiel, knowing the gender doesn’t really matter. Having a great relationship and taking excellent care of your pet is what truly matters in the long run.

Kathryn was a librarian in a previous lifetime and is currently a writer about all things pets. When she was a child, she hoped to work in zoos or with wildlife in some way, thanks to her all-consuming love for animals. Unfortunately, she’s not strong in the sciences, so she fills her days with researching and writing about all kinds of animals and spends time playing with her adorable but terribly naughty tabby cat, Bella. Kathryn is hoping to add to her family in the near future – maybe another cat and a dog.

My Cockatiel Laid An Egg! Now What?