How to Tell the Age of a Baby Squirrel (With Pictures) 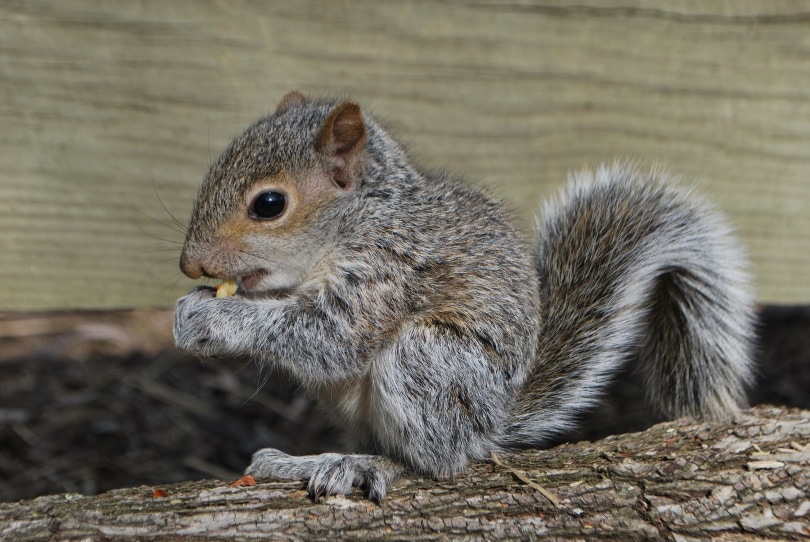 Baby squirrels age quite quickly. If you find a baby squirrel, it is essential to determine its age accurately in order to determine your next steps. Depending on the squirrel, it will need different care or perhaps no care at all. Age is important for determining what to feed your squirrel when to release it, and whether it actually needs any care.

There are many methods used by scientists and vets for determining the age of squirrels. Many of these are not appropriate for most ordinary people to do. For instance, X-rays can determine the current level of bone growth and fusion, which can help determine the age of the squirrel. There are other ways that vets can determine their age accurately, such as weighing their eye lens.

Such methods aren’t helpful for us, though, as these require extensive equipment or dissection. Luckily, there are alternative options, though they often provide a slightly less accurate age. Use multiple methods for the most accuracy.

Squirrels generally become self-sufficient around 10-12 weeks, though they may not look full-grown at this point. You shouldn’t find helpless squirrels that are older than 3 months.

Like every other animal, squirrels meet certain developmental stages at different times. You can use these stages to determine how old the squirrel is. This will give you a somewhat accurate idea of your squirrel’s age, as they age quickly and go through many milestones in only 6 weeks.

It can be much more difficult to determine the age of your squirrel after this 6-week period. The squirrel’s development slows down, which makes it difficult to get an accurate determination of the animal’s age.

Squirrels are born without teeth, like most mammals. Their lower front incisors don’t appear until they are about 3 weeks old. If your squirrel doesn’t have any teeth, they are not yet 3 weeks. The upper incisors don’t come in until about 4 ½ weeks.

This is less accurate, as the development of a squirrel’s eyes tends to vary significantly. Many squirrels will open their eyes by the time they’re 5 weeks old. This isn’t completely accurate, though. They can be either clear or cloudy at this point.

Based on the squirrel’s age, the level of care that they need will differ. You can sometimes use this to determine their age.

At 6 weeks, squirrels often look like small adult squirrels, standing upright and taking part in many adult activities. However, squirrels are not weaned until they are 10 to 12 weeks. For this reason, they still require extensive care at this point. They are different from baby birds in this regard.

By 12 weeks, the squirrel will be difficult to tell apart from an adult. They are completely self-sufficient at this point. If a squirrel is effectively staying away from you, they are likely older than 12 weeks and able to take care of themselves.

Determining a squirrel’s age after 6 weeks is difficult, as they don’t change quite as much from week to week. This can make it difficult to determine when to release the squirrel, as well as whether it needs extra care at all. Squirrels that are around 8 to 9 weeks may be able to survive if they fall from their nest, as the parents may locate the baby and continue to care for it. The best thing that you can do at this age is to return the squirrel to the nest, as they are sturdy and likely able to thrive despite their small excursion from the nest.

A squirrel that is sitting upright and moving around is likely at least 6 weeks. If they are jumping and generally acting like an adult, they may be as old as 10 weeks. Before 6 weeks, squirrels aren’t that mobile.

Most of the information in this article relates to Eastern Grey Squirrels, which are the most common in most areas. However, other squirrels age at different rates. It can be difficult to determine the species of a squirrel before it is an adult unless you’ve handled squirrels extensively. For this reason, determining how exactly the squirrel should be aging can be difficult. You often won’t know the age of your squirrel until they are older and their species has been revealed.

This is one reason that it is important to work with a professional who can determine the species. Otherwise, you may be using the wrong developmental pattern, which can throw off your estimate. A professional will likely be able to determine the breed of squirrel, even when the squirrel is very little.

Furthermore, in most areas, it is illegal to take care of a squirrel.

Through a combination of physical development, amount of care needed, and the squirrel’s species, you can typically make a pretty accurate determination of a squirrel’s age. You can use this to determine whether the squirrel is old enough to care for itself (although, if you caught a squirrel, it is probably still in need of care and considered a baby) or if you need to care for it until a professional can do so.

Usually, you can determine the age of a younger squirrel down to the week based on fur growth and other developmental milestones. Once the squirrel reaches 6 weeks, it can be difficult to determine the age because their development slows down substantially. Before 6 weeks, they are changing every day. Afterward, they often stay the same for weeks at a time.

Luckily, you often don’t need to determine a squirrel’s exact age — within the week is often plenty for feeding purposes.