Do Goldfish Need an Air Pump? 5 Ways to Discover They Require More Oxygen 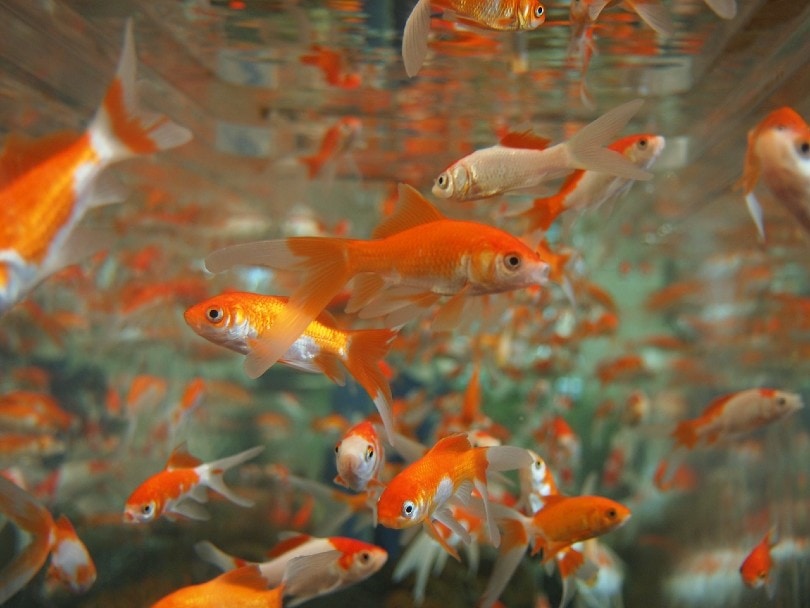 All aquatic life requires a form of aeration inside of their aquarium. Oxygen is essential in goldfish and they need it to carry out basic bodily functions. Well-aerated water that is kept fresh and clean is one of the best ways to keep a goldfish healthy. They need as much oxygen as possible inside of the water which is obtained through good surface movement.

Oxygen is also important for the beneficial bacteria growing in the filter media, which turns toxic ammonia into nitrates and helps protect goldfish from harmful waste toxins in the water.

The Amount of Oxygen Goldfish Require

To put it simply, goldfish require a lot of oxygen. For this reason, you need to place various aeration systems throughout the tank. They should also not be placed in bowls or small spaces where the surface of the water is significantly smaller than the rest of the aquaria.

Goldfish are large and active fish that will quickly take up oxygen in the water. This is another reason goldfish should have large tanks. The bigger the tank, the more dissolved oxygen is available in the water for the goldfish to take in.

Overcrowding can also cause the goldfish to compete for oxygen. Stocking the goldfish tank correctly is important to ensure each goldfish can breathe properly and take in oxygen with little effort.

Cold water holds more oxygen than warm water does. Since goldfish are temperate water fish, they should be in a tank with a temperature ranging from 17°C to 24°C. Goldfish are used to naturally taking in more oxygen because they originate from cold water.

If the temperature seems to frequently warm to over 25°C, your goldfish will struggle to retain oxygen. Tropical fish are adapted to less oxygen and that is why tropical fish can handle warm water with minimal oxygen issues.

Goldfish breathe through their gills that move in synchronization to their mouth. They draw in the oxygen through the gills and expel carbon dioxide. The gill flaps will open and close to let oxygenated water in and this helps your goldfish to breathe effectively in an aquatic environment. Goldfish do not have lungs as mammals do, and their mouth and gills are the primary external body movements to take in oxygen.

Types of Aeration for Aquariums

As the years have passed and fish keepers have found new ways to oxygenate an aquarium, various aeration systems are readily available on the market.

The Importance of Surface Area

Oxygen enters the water through the surface. This makes it important to have a proportionate aquarium. Goldfish do best in a rectangular aquarium because of the amount of surface area the tank design has to offer.

When you are using an aeration system, the surface movement lets oxygen inside, which then gets used up by the goldfish and is quickly replenished.

The Function of an Air Pump

Air pumps are usually an electrical box that is plugged into an outlet. The air pump is connected to aquarium grade airline tubing which is then placed inside of a tank and connected to an air stone. When the air pump is switched on, it pumps air at high speeds through the airline tubing and the small porous holes in the air stone. Bubbles will emerge and oxygenate the surface.

Remember to keep the air pump above the water level in case the power goes out and the water flows through the tubing and into the air pump which will break as a result.

Never dry run an air pump as you will quickly burn the motor and it will no longer work. Always have the tubing and air stone connected and submerged in the water when you switch it on.

Oxygen is important to goldfish and they need to have constant access to an oxygen supply. Running an aeration system is just as important as a filter and will provide oxygen to keep the aquarium’s micro-organisms and goldfish healthy. All goldfish require an aeration system even if they do not show any symptoms of low oxygen levels. It is the most humane and essential way to give your goldfish some help to breathe properly.

15 DIY Chicken Toys to Entertain Your Flock (With Pictures)