How Long Can Turtles Hold Their Breath? 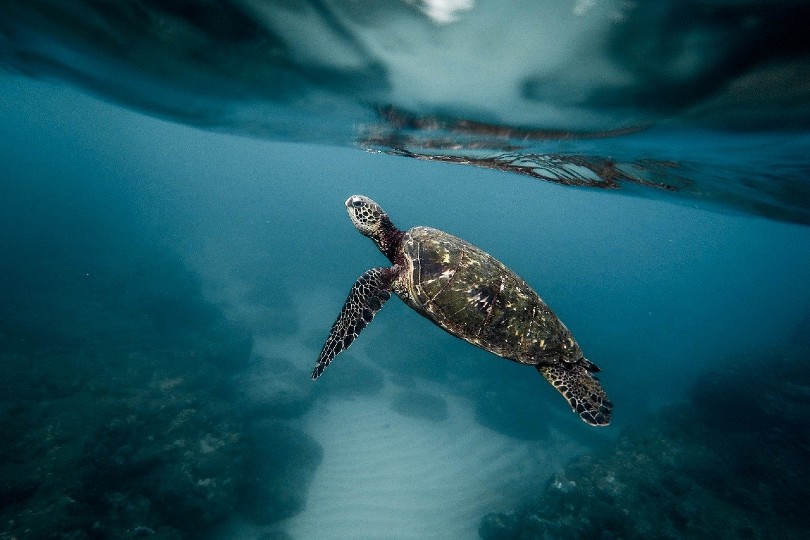 Even though turtles spend a lot of time underwater, they cannot breathe underwater. Still, turtles have evolved so that they can hold their breath for long periods of time, allowing them to remain underwater much longer than us.

The exact time turtles can hold their breath underwater depends on the turtle type and age. For example, some turtles can only spend minutes underwater, whereas others have been documented to stay underwater for hours.

Before looking at the exact times, we need to talk about turtle breathing and swimming behavior. Even though turtles spend a whole lot of time underwater, they are primarily land animals. If they remain underwater constantly, they will die.

Turtles have the ability to stay underwater for longer periods of time than humans. Most likely, turtles evolved this way since the water provides a lot of food and hiding places for these prey animals. Plus, turtles can move much faster underwater, allowing them to escape their predators better.

Why Turtles Can Hold Their Breath Underwater for So Long

As we’ve already mentioned, turtles have the ability to hold their breath underwater for much longer than humans. There are three main reasons for this. Firstly, turtles have a very different respiratory, skeletal, and muscle system than us, allowing turtles to breathe easier.

The second reason turtles can hold their breath underwater for so long is that certain varieties, namely freshwater turtles, have the ability to absorb oxygen through their cloaca, which is sort of an all purpose cavity found in many vertebrates and invertebrates. With their cloaca, they can absorb the oxygen they need, meaning they don’t have to technically breathe for their oxygen.

Finally, the third reason turtles can hold their breath for so long is that they have external nares above their mouth. Since the nares are above their mouth, the turtles don’t actually have to come above the surface to breathe. They simply come right to it and expose their nares to the air. With this reason, the turtle is breathing, though it may appear like it is holding its breath.

How Long Turtles Can Hold Their Breath

Whenever a turtle or any other animal is sleeping, the metabolic rate slows. As a result, the turtle needs to breathe less frequently whenever it is sleeping. If your freshwater turtle is sleeping underwater, it can hold its breath for a little over an hour.

Sea turtles can hold their breath for much longer times. The record for a sea turtle holding its breath underwater is a little over 7 hours. This record belongs to a leatherback sea turtle.

When given the choice, most turtles will not press their limits. Instead, most turtles prefer to dive, swim underwater for five minutes, and then come up for air for a few seconds. This simply allows the turtle to more leisurely breathe and swim on its own time, even though it can hold its breath for much longer.

Many people do not know this, but turtles hibernate, much like bears and other animals. Some turtles actually hibernate underwater, especially turtles found in northern areas. During the hibernation process, the metabolic rate drops, meaning that the turtle requires less food and oxygen to survive.

Turtles can hibernate underwater for months at a time because of their cloaca. As we learned above, the cloaca can absorb oxygen, allowing turtles to remain underwater for longer periods of time. Cloacas generally act as pumps, meaning they expel the water while absorbing the oxygen.

The exact time turtles can spend in hibernation depends on its type, though most have the ability to hibernate underwater for a couple of months at a time.

Why Can Sea Turtles Stay Underwater Longer Than Other Turtles?

Scientists have taken special time to observe sea turtles’ ability to hold their breath underwater. Just like every other turtle on the planet, sea turtles cannot breathe underwater and need air to survive, yet this species excels in the treacherous waters.

Just like freshwater turtles, sea turtles don’t try to press themselves too much. Most turtles will stay under water for five to ten minutes before coming up for air for a couple of seconds. If they are stressed or being more active, they will need to come up for air more frequently.

How Long Can My Turtle Stay Underwater?

If you’re reading this article, you likely have a turtle and want to know how long your turtle can breathe underwater. Most freshwater varieties that are kept as pets can hold their breath for 30 to 45 minutes while in motion. Still, most turtles will not stay under water for this length of time unless they have to.

The exact amount of time a turtle can hold its breath depends on its age and species. The average time ranges between 30 minutes to 45 minutes while in motion, or one hour while sleeping. Of course, hibernating turtles can last even longer underwater, thanks to their cloaca.

If you notice your turtle is underwater for a long time, the turtle is either hibernating or has drowned. Even though turtles are skilled swimmers, drowning is possible since they require air to breathe. Luckily, your turtle will likely know its limits and come up for air more frequently than it needs to, meaning you don’t have to worry about it drowning if you provide it the proper habitat.