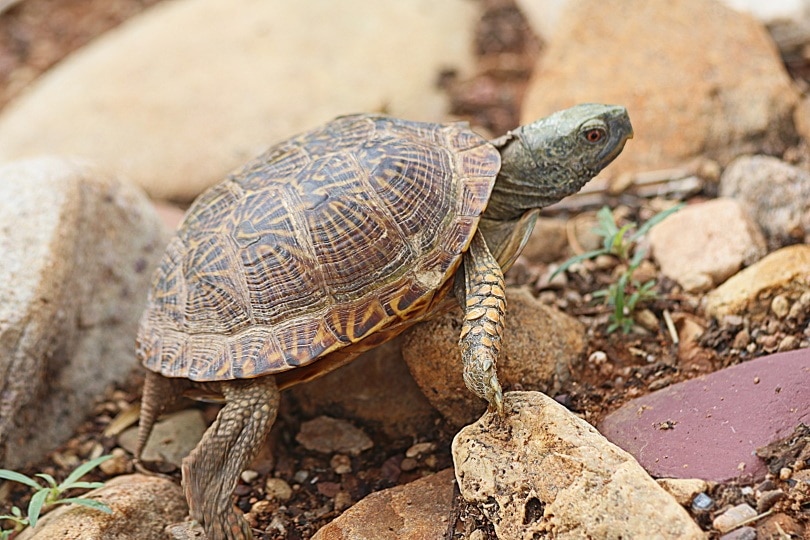 Unfortunately for all pet lovers, the sad reality of owning a pet is that they will one day pass away. In the case of a pet turtle, however, it can sometimes be hard to tell whether your friend in a shell really has joined the great beyond or not. Part of this is because the majority of the turtle’s body is hidden inside their hard shell and out of sight. The most common reason it can be hard to tell if your pet turtle is dead is a process called brumation.

1. No Response To Stimulation

A brumating turtle is still aware enough of their surroundings to notice if you deliberately try to stimulate them. Try gently pulling on your turtle’s legs, pressing on their cloaca, or even flipping them on their back. If your turtle doesn’t try to move or respond to your efforts, they are most likely dead.

2. Cold To The Touch

If your turtle feels abnormally cold when you touch them, they could be dead. However, this sign is a little bit trickier because a brumating turtle does have a lower body temperature. You may need to look for additional signs to confirm your turtle is dead.

A dead turtle will begin to smell as they decompose. This process will begin quickly in a dead turtle, although colder temperatures can delay it a bit. This odor is particularly foul and is a good indication that your turtle is dead.

Check your turtle’s eyes if you are not sure whether they are dead. Deep, sunken eyes can be an indication that your turtle is deceased. However, dehydrated turtles can also have sunken eyes, so you may need to look for other signs to confirm your turtle is no longer living.

If you find maggots or flies infesting your turtle’s body, there’s a good chance that they are dead. A brumating turtle’s immune system slows down, which sometimes makes it easier for them to get injuries infested with maggots. However, a turtle covered in flies or maggots is more likely dead.

A dead turtle’s skin may look loose, shriveled, or sunken. This can happen as the dead turtle begins to decompose. If your turtle’s skin looks like it’s shriveled or abnormal, they could be dead rather than just in brumation.

A rotting shell or skin is another sign that you are dealing with a dead turtle. Again, this rotting occurs as the dead turtle decomposes. Sometimes a turtle’s shell can get soft when they are bromating, so take into consideration other signs of death as well before you completely give up on your turtle.

What If Your Turtle Is Just Cold?

If your turtle just seems cold and unmoving but has no other signs of death, there are a couple of tricks you can try to see if they are still alive.

Because brumating turtles can also “breathe” through their cloaca, you can check that area as well. If the turtle is breathing, you will see the cloaca move or pulse. Again, you may need to watch the area for 10 minutes or so to catch the turtle breathing.

If you think your turtle is just cold rather than dead, you can try warming them to see if you detect other signs of life. Place your turtle in a safe tub and fill it with room temperature water up to about halfway up their shell. Warm your turtle for about 15-30 minutes. If your turtle is alive, you should see signs of life after that time. Your turtle may urinate or defecate in the water or begin moving around.

Take Them To The Vet

Because we love our pets, we want them to live forever. Sadly, that will never be the case. However, when it comes to your pet turtle, there’s always a chance that your seemingly lifeless pet is still with you. Look for these signs we’ve discussed to determine if your turtle is dead and hopefully you will find good news rather than the worst.