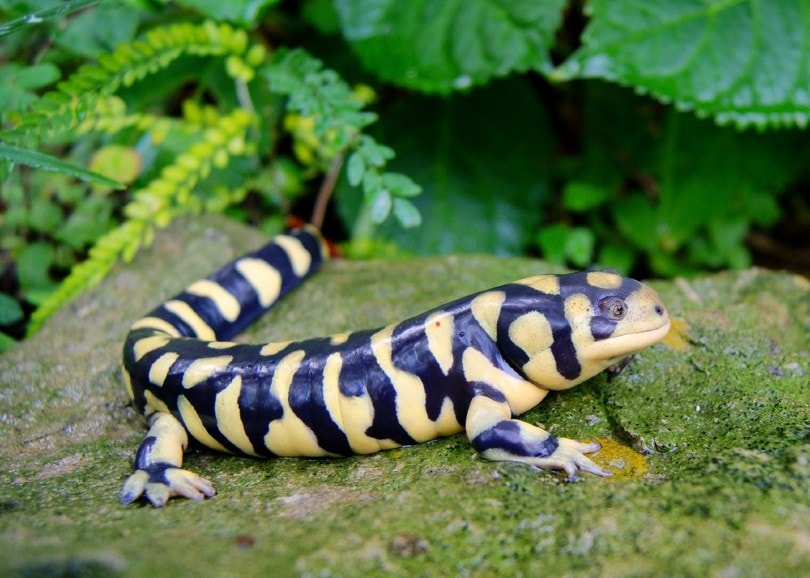 One of the most popular pet amphibians in the United States, Tiger Salamanders are beautiful to look at, easy to house and care for, and easy to tame. They are native to North American woodlands and grasslands, where they live in small underground burrows close to bodies of water.

Tiger Salamanders get their name from the yellow blotches, spots, or stripes against their black bodies, giving them a tiger-like patterning. They have distinctly large eyes on small heads with small snouts, with muscular legs and long tails. These amphibians make wonderful pets for beginners and experts alike and are even known to recognize and interact with their owners.

If you are looking at bringing home a Tiger Salamander, you’ve come to the right place! While you should always do additional research, in this article, we give you the basic rundown on the care of these beautiful animals.

The Tiger Salamander is one of the most commonly found salamanders in the United States, with the widest range and distribution of all North American salamanders. They are found throughout the U.S., Canada, and Mexico and are even said to be more common and widespread than American Bullfrogs. Tiger Salamanders spend most of their time underground in their burrows, though, so you are unlikely to ever see one in the wild.

The Tiger Salamander was once considered a single species, but recently, scientists have discovered that they actually consist of several closely related species and various subspecies. While they are named and known for their distinctive tiger stripe markings, they have a massive range of colorations and markings, even within the same species, that can vary widely among individuals. They are one of the largest salamanders, typically reaching up to 13 inches in adulthood, but some have been recorded at 15 inches or more.

Tiger Salamanders make great pets because they are hardy and among the most interactive amphibians and adapt well to captivity. They can be tamed quickly and easily and will accept food from their keeper’s hands and even recognize them! They typically live for around 10 years but are known to live up to 14 years old at times.

How Much Do Tiger Salamanders Cost?

Captive-bred Tiger Salamanders are hard to find because breeding them is difficult. Also, finding and catching wild Tiger Salamanders is even illegal in most places, so the best route is a rescue organization or reputable breeder. Usually, you can expect to pay about $50, depending on where you purchase your salamander, but they often fetch higher prices too.

Most salamander species make great pets to observe, but the tiger Salamander is different in that they are easily tamable and quickly overcome any fear of humans. They are known to follow their owner’s movement from inside their enclosure and readily take food from their hands, but they should not be handled due to their extremely sensitive skin that is easily damaged.

They are typically non-aggressive animals and can happily live with other salamanders, but they do not necessarily need to.

Tiger Salamanders are among the largest salamander species, often reaching lengths of more than 13 inches. They have stocky bodies with black to olive green coloring, usually with darker black spots or stripes or lighter stripes on darker bodies. They typically have lighter-colored underbellies, but colorations within the species can vary widely.

How to Take Care of Tiger Salamanders

Since they are so adaptable and easy to care for, adult Tiger Salamanders can be housed in a variety of enclosures, and even a large plastic container will suffice. The best is a glass aquarium with a secure mesh lid, as this allows for easy viewing. Either way, you’ll want an enclosure of at least 10 gallons per salamander, with enough space for a substrate and hiding places.

No matter the substrate you choose, it should be moist and soft to allow your salamander to burrow. Organic soil free from chemicals or fertilizer is the best option because it can break down feces or uneaten food, but coco-fiber is a suitable alternative. The substrate needs to be soft in order to not damage the skin of your salamander, with no jagged edges, and it should be big enough so they will not ingest it while eating. You should avoid small pebbles, wood chips, or sharp pieces of bark.

Usually, additional heating is not required for Tiger Salamanders because a general room temperature of around 75 degrees Fahrenheit is ideal. They do not tolerate temperatures higher than this well, although slightly lower temperatures are fine. Some Tiger enthusiasts use UV lighting, although this is not necessary, and too much may even cause harm to your salamander’s skin. A regular night/day cycle of around 12 hours each is ideal.

Do Tiger Salamanders Get Along With Other Pets?

Tiger Salamanders are not overly territorial and in general, are solitary creatures, rarely interacting except during breeding or feeding. They are usually fine living with other salamanders provided that they have enough space, but they do not get lonely on their own and company is not necessary for their happiness. Tiger males are known to be aggressive at times, especially if there is not enough space in their tank, and they may bite at each other’s tails. Larger Tigers have even been known to eat smaller varieties.

What to Feed Your Tiger Salamander

Tiger Salamanders are carnivores and will eat almost anything that they can get into their mouths. Live prey is ideal because they will usually ignore dead food or pellets, so worms, crickets, roaches, and various other insects are all ideal. Pinky mice can also be fed occasionally, but only if your Tiger is large enough to eat them.

It’s important to note that these salamanders can easily get overweight, and food with high-fat content, such as pinkies and certain worms, should be given sparingly. They’ll need to be fed two to three times per week, depending on their age and size. A good rule of thumb is to feed them as much as they’ll eat in an hour or so and take the rest out.

If all your salamander’s nutritional and housing requirements are met, they are healthy animals that can live for a long time. One important factor is to handle them as little as possible to avoid damaging their sensitive skin. The oils and salts on your hands can potentially harm your salamander, but if you do need to handle them, make sure your hands are thoroughly washed and wet to prevent injury.

Tigers are also susceptible to respiratory infections if their habitat is not kept in check. If they show any symptoms of wheezing or excess mucus, they’ll need to go to an exotic vet.

In the wild, Tigers migrate to breeding ponds in the early spring. Females can lay up to 100 eggs, which typically hatch after about 4 weeks. These larvae will stay in the breeding pond until they are fully grown, anywhere between 2 and 5 months.

Breeding Tiger Salamanders in captivity is notoriously difficult, as it is a challenge to reproduce the natural environment and stimuli of the wild. Most breeders will keep their salamander outside for most of the year to get them to breed, but in an indoor environment, they will often use hormone injections.

Are Tiger Salamanders Suitable for You?

Tiger Salamanders are wonderful pets that are easy to care for. Unlike many other salamander species, these animals are easy to tame and quickly lose their fear of humans. The fact that they are easy to house makes them ideal for beginners, but they are great for experienced reptile and amphibian keepers too. They are fascinating creatures to watch and make good pets for responsible children.

Whether you are an experienced amphibian owner or just want to dip your toe into this fascinating world, the Tiger Salamander is a wonderful choice.