9 Snakes That Don’t Eat Mice & Other Rodents (With Pictures) 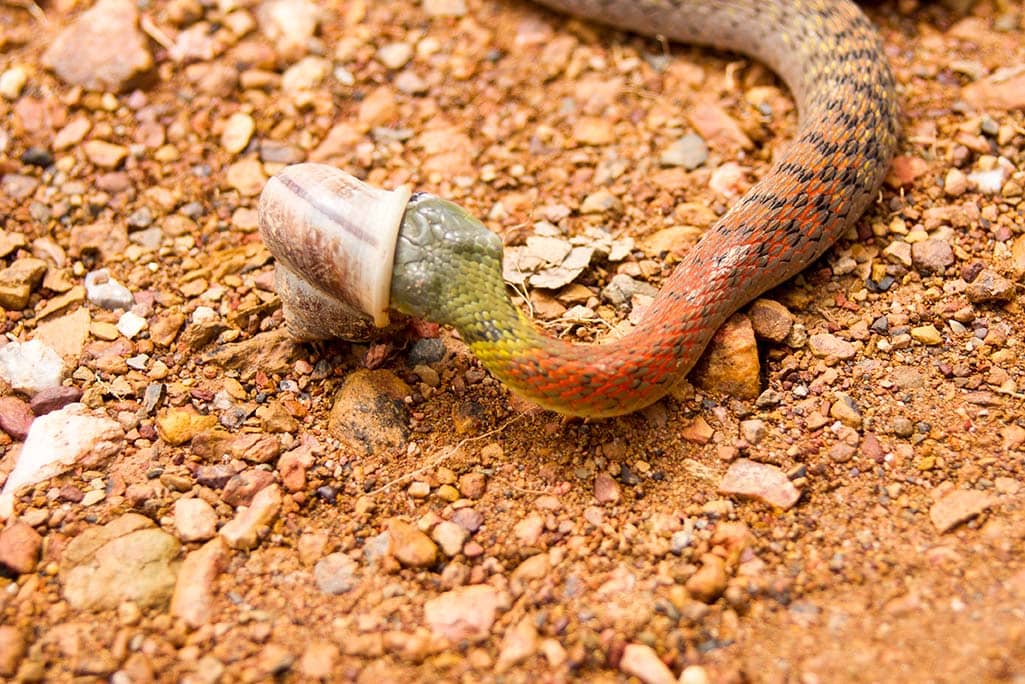 Some potential snake keepers find snakes fascinating but can’t stand feeding their slithery pet a live mouse and other rodents. Others are vegetarian and want a pet that aligns with their dietary beliefs.

However, one sure thing is that snakes cannot survive as vegetarians because they are obligate carnivores. There are several easy-care snakes that feed on eggs and invertebrates like insects, fish, cricket, and many other small creatures.

These snakes can still meet their nutritional needs on other prey items, but not live rodents and birds. Keep reading to discover your alternative pet snakes.

African egg-eating snakes are well-natured, although rare to find as they are not bred in captivity. However, they are easy to care for if you acquire one from an exotic pet dealer.

This snake breed is generally docile, and it has no teeth, so it can only eat eggs, as the name implies. This type of food isn’t offensive for snake keepers that are squeamish about rodents. However, the African egg-eating snake can only be easy to care for if it’s an adult because it’s difficult to find appropriately-sized eggs for baby snakes.

Baby snakes require quail and finch eggs because they are smaller and safer to eat. Chicken eggs are not advised, although they can work on adult snakes.

One thing you might want to know about these snakes is that they stay small forever!

If you hate the idea of feeding rodents to snakes, the Indian egg-eating snake may be the pet for you. They are the closest you can get to vegetarian snakes.

They are also not as easy to find as the other breeds, although they are pretty easy to care for if you find one. However, some snake fanciers suggest that they might not be the easiest to care for, after all, because it’s hard to find appropriately-sized eggs for them.

You can feed the males and young females finch eggs, though.

Garter snakes are among the most common snakes in the United States; no doubt that you’ve seen some in your backyard. Of course, they aren’t the most exciting pets for snake fanciers, but they are perfect for those seeking small snakes that don’t want to feed on rodents.

These snakes can feed on any creature they can overpower, which means you can offer them food such as fish, insects, and earthworms.

It would be best to know that it’s vital for these snakes to have a varied diet if they can’t have rodents. Also, how often you provide food for your snake depends on the prey you offer it. For instance, it should feed twice a week if it eats worms and eggs and every five days or so if it eats fish.

Rough Green snakes are native to North America and don’t eat rodents, although they enjoy insects and other critters. They are thin, with bright green backs and a contrasting yellow belly.

These snakes are docile and rarely bite, and are non-venomous, which means they won’t harm you if they nip at you. You should refrain from overhandling them, though, as they quickly get stressed.

These snake species mostly live near a water source, thus the name. They’ve adapted to eating anything in their environment, meaning they primarily feed on fish and frogs.

There are various water snake species and come in different sizes. This means that while some are big enough to eat frogs and fish, smaller water snakes eat insects and worms.

You might want to be careful with the frogs because they contain parasites that can harm your pet snake. Also, water snakes do not always make good household pets as they can be aggressive and may not adapt to being handled easily.

Smooth green snakes are also docile and will always retreat when they feel threatened. They are harmless and non-venomous, suitable for any interested snake owner.

The Flowerpot snake is an interesting snake species. Unfortunately, these snakes are mainly female and have no room for males because they don’t have mates!

Only female flowerpot snakes exist, and they give birth to other females without undergoing fertilization.

Flowerpot snakes are tiny, blind, and harmless. They are typical worm size, measuring around 4.4-6.5 inches, and only about a shoelace-thick, among the smallest snakes on earth.

Due to these snake sizes, they can’t handle larger prey, which can even turn on them instead. Flowerpot snakes feed on tiny ant and termite eggs, larvae, and pupae.

Unlike other snakes that prefer to dine on rats, lizards, and other small prey, snail-eating snakes can only feed on snails.

There are about 75 known snail-eating snake species. Their jawlines are modified in a way that they cannot accommodate anything else that isn’t a slug or snail.

The good thing about snail-eating snakes is that they have a pretty straightforward diet.

Worm snakes are tiny, harmless, and secretive burrowing snakes of worm-like appearance. This name usually refers to blind snakes of the family Typholidae.

These snakes are shiny, brown, with pink or whitish bellies. They also have small pointed heads that allow them to burrow after insects and earthworms, pretty much all they eat.

Reasons You May Not Want to Feed Your Snake Live Rodents

While snakes can eat rodents like rabbits, mice, and rats, there are circumstances and reasons not to feed your pet such prey. For instance:

All snakes are inherently carnivorous and have an instinct to kill for food, whether insects, other invertebrates, or warm-blooded rodents. However, sometimes the mouse or rabbit you choose as food can be bigger than your slithering pal, especially if it is a beginner snake.

If a mouse or rat is starving and it’s bigger than the snake, it might end up turning on your pet snake rather than the other way round. So you can avoid feeding rodents to your snake to protect it until it’s capable of handling such prey.

Some snake keepers can’t just withstand the messiness of feeding alive or dead rodents to their snake. This is because it involves thawing or reheating the dead rodent in your microwave or oven, resulting in disgusting ‘leaks.’

Plus, the pet snake can create a mess you don’t want to clean after it ruptures and bites into the rodent.

Some snake keepers feel like feeding a hamster, rabbit, or mouse to their snake is technically feeding a pet to another pet. They find rodents cute and even own one as a pet, so they find it distressing to offer them to their snake as food.

You must be glad to know that not all snakes eat rodents, birds, and other larger prey. You can go for an egg-eating snake, snail-eating snake, or other snake species that don’t enjoy mice and other rodents.

So, which pet snake is your pick?

Do Rattlesnakes Nurse Their Young?