Do Rattlesnakes Nurse Their Young? 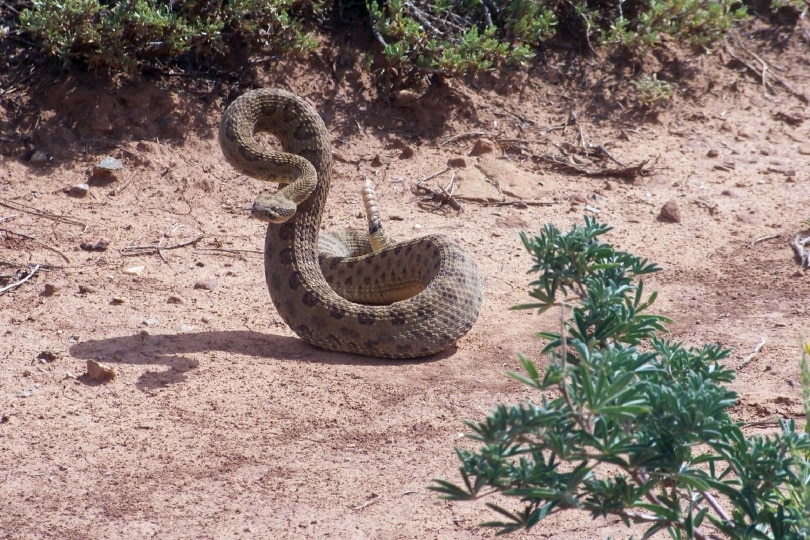 Rattlesnakes are reptiles, not mammals, which means that they do not lactate and therefore cannot nurse their young. With that said, the rattlesnake’s reputation for being bad mothers that abandon their babies at birth is an unfounded one because they stay and care for their young until their first shed when the babies will slither off and start their own life.

Rattlesnakes are a type of viper that are found across the Americas. The rattle on the end of the tail is the most obvious feature of this snake. The viper shakes this rattle to ward off enemies, and if you hear the noise, you should back away quickly. The rattle is also notable for the fact that a new ring is added to the rattle every time that the snake sheds its skin.

Rattlesnakes are venomous and a bite should be considered a medical emergency, although a bite is rarely fatal unless left untreated. Baby rattlesnakes can deliver a venomous bite from the age of about one week old, however, humans are more likely to be bitten by a juvenile rattler. This is because, while they have developed the ability to bite and deliver venom at this age, they have not fully developed their rattle so are unable to warn people off.

How Are Rattlesnakes Born?

While most snakes lay eggs, the rattlesnake is ovoviviparous, which means that the female carries the eggs for 3 months and, rather than laying eggs, she gives birth to young rattlesnakes. Female rattlesnakes have something of a bad reputation for abandoning their young. In reality, however, the mother will protect her young until their first shed.

A rattlesnake will first shed its skin at the age of about one week. Once this has happened, and they can deliver a venomous bite, they will leave the nest and their mother to slither off on their own.

Are They Born with Rattles?

Rattlesnakes are not born with a rattle. They have a small scale that is called a button. As the young snake continues to grow and shed its skin, a new ring is added to the rattle until it can make the distinctive rattling noise. Although each segment of the rattle is made up of three buttons, of which only one is visible, there is nothing rattling that makes the noise. The rattling noise is actually the sound of the segments rubbing together.

What Do Baby Rattlesnakes Eat?

While inside the mother rattlesnake, babies survive on the yolk of their egg sack. But, because the baby has essentially matured before being born, they are able to hunt and kill prey after their first shed, which can occur after just one week. This means that one week after being born, the young rattlesnake can usually hunt and provide for itself.

How Do Rattlesnakes Care for Their Babies?

Most of the hard work has been done by the time a baby rattlesnake is born. The baby resides inside the mother inside an embryo, which is a lot like an egg with no shell. For the first week after birth, the baby does not need to eat. During this time, the mother will watch her clutch of babies, which can consist of up to 10 young. She will prevent them from straying too far, and once the young finish their first shed, they can hunt their own food.

Mammals are named after the mammary glands that females are born with. These glands produce milk that the animal’s offspring will consume for the first days, weeks, or months, after birth. Mammals are the only group of animals that have these glands and are the only group of animals that will lactate and nurse their young. Because rattlesnakes are reptiles and not mammals, they do not have the capacity to produce milk. Therefore, they do not nurse their young.

How Do Rattlesnakes Feed Their Young?

Rattlesnakes feed their young before they are born. The young rattlesnake eats the yolk of the egg. Once born, the mother rattlesnake will care for her young, but they are born with most of the same attributes as an adult. The only thing they can’t do straight away is hunt. However, they can and do hunt and kill prey after their first shed, or roughly one week after being born.

Your Cockatiel is Sneezing? Here’s What to Know

9 Snakes That Don't Eat Mice & Other Rodents (With Pictures)