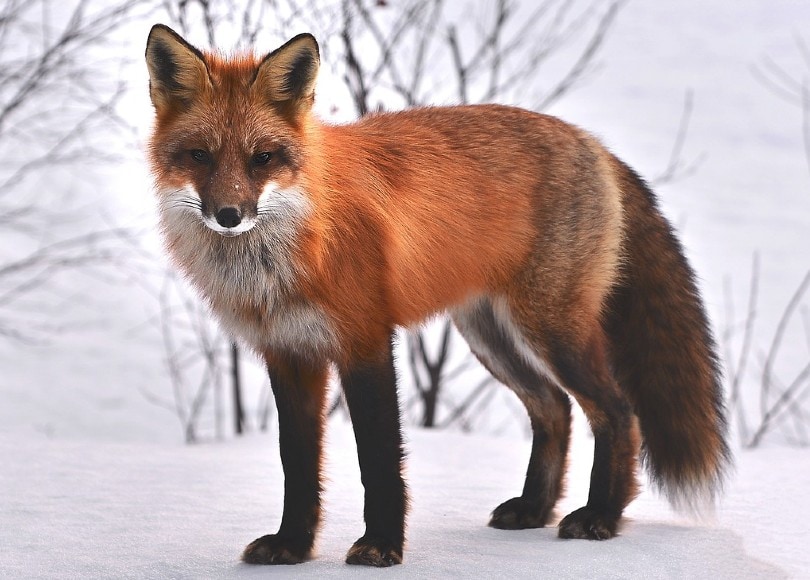 There are over 30 different fox species, and each has a differing and uniquely colored coat that can be strikingly different, even among foxes of the same species. These coat colors, or morphs, can also vary depending on the time of year when the fox was born. Some foxes actually change color with the seasons and some change multiple times a year, while other foxes are born with unique morphs that they keep for their entire lifetime.

There are so many color morphs among foxes that it can make species identification difficult, but this is part of what makes foxes so special. Many of these color morphs and mutations are naturally occurring in different fox species, but some are the products of directed breeding programs from fox fur farms.

With all the different fox species, combined with human development, there are dozens of different fox morphs around today. In this article, we take a look at 12 of the most common morphs and mutations found among fox species. Let’s get started!

The classic color among foxes, the red or orange morph is the most common coloring found in the Red Fox species. It can vary from light orange to a darker red, depending on the season, but almost all red foxes are actually orange, with little discernable red in their coats.

The silver/black color morph occurs in Red Foxes and can vary fairly widely in shade. Silver morphs have grey or silvery coats with black patches on their noses, ears, and legs, almost like those of a wolf. They typically have white tails, like most Red Foxes, with a lighter underbelly. There are extreme versions of this morph, including completely black foxes, although these are very rare.

A combination of the red and silver/black morph, the cross morph is the normal orange and red base coat, but with patches of black or dark brown that run from their head, shoulders, and back and extend down their legs. The name “cross” comes from the crossing over of the black markings from the back and shoulders.

Another Red Fox morph, fire and ice foxes have a beautiful golden yellow tone in their coats. They have beige coats with darker red and minimal yellows and grey feet and ears that give them their name. These foxes are truly uniquely beautiful and are often sold as pets.

The champagne fox is another red morph that first originated in the 1970s. They have a light red color, almost pink, as opposed to orange, with white-tipped tails, blue or green eyes, and pink noses. They are almost dog-like in their appearance, and their pale, Husky-like eyes are caused by a unique calcium deficiency, so they require calcium and vitamin D supplements to get the calcium that they need.

A mixture of grey and white coloring, platinum foxes are a product of the fur industry, dating as far back as the 1930s. They are usually almost completely white, with white feet, bellies, and necks, but they have a bit of grey on their heads, ears, and backs.

The marble fox is a variation of the platinum morph, with more grey and black in their coats. They are mostly white but have grey and black markings that can vary widely in shape and size. They usually have black ears and a black stripe running from their head to their tails. These foxes are often bred with other hybrids to create new varieties and are often sold as pets.

The blue fox is a unique morph found in Arctic foxes. The dark, charcoal-blue covers their entire coat, with lighter coloring on their belly and legs and occasional darker blue or black ears and faces. This morph is a natural mutation in Arctic foxes, and they stay this color throughout the year, lightening only slightly during winter.

The lavender fox is a rare mutation of the Red Fox, and their coat is typically a light brown with blue/grey tints. They have beautiful blue eyes that can be an ice blue or have a purple tinge, and their noses are typically grey/blue too. They are rare foxes, and little is known about their genetic background.

The salt and pepper fox is a grey morph, with a coat consisting of orange, red, black, and white. These scattered colors are what give the morph their name. They typically have light orange coloring on their head and chest, with specks of white and black. Their bellies are usually white, and they have a grey-looking body with salt and pepper markings.

Another morph developed by selective breeding, the blue frost morph was created by crossing a silver fox and a blue arctic fox. They are also known as the indigo or bluesilver fox, and they have a light grey/silver coat with a dark grey stripe running down their back. While these hybrids are beautiful, many of them suffer from genetic issues and health problems, resulting in high mortality rates.

Albino foxes are a natural mutation that can be found in the wild. These foxes lack melanin, a genetic mutation found in many other mammals, resulting in a purely white coat and pink noses and ears and pale eyes. Experts believe that the mutation may be caused by a lack of nutrition, but there are also purely white foxes that are not considered albino because they do not have the unique genetic mutation.