Home » OYE BAGGU » How Intelligent Are Turtles? What You Need to Know!
OYE BAGGU

How Intelligent Are Turtles? What You Need to Know! 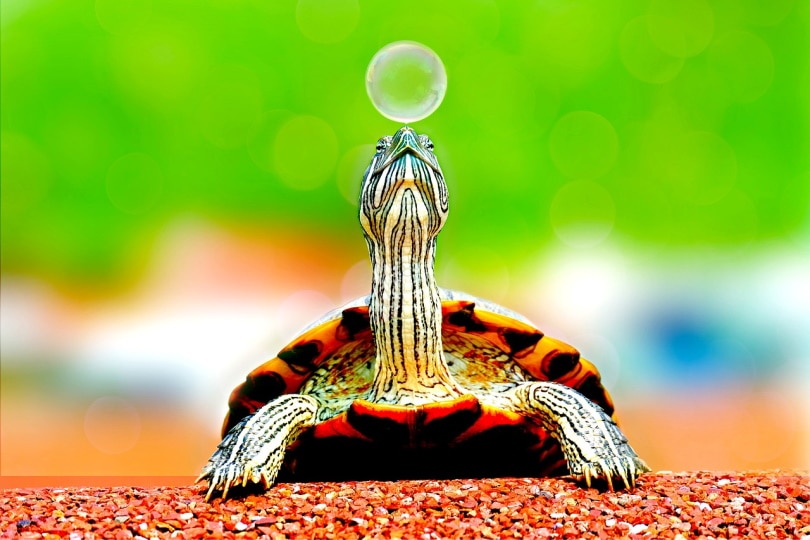 If you have a pet turtle, you have probably spent quite a bit of time watching them in their habitat. Like many pet owners, you have also likely wondered what your turtle thinks about. How do they perceive and recognize their environment?

While it is difficult to define exactly how intelligent your turtle is, we can explain some general expectations for turtles’ intellectual abilities. Read on to learn more about turtles’ brains, instincts, experiential learning abilities, and intellectual variations in breeds of turtles.

Turtles are reptiles, so their brains are different from those of mammals. Their brains are smaller and less complex. They generally have smaller cerebral hemispheres than mammals. This is the area of the brain that controls reasoning and learning. However, turtle brains have changed over time as turtles have survived and adapted over the last 250 million years.

One study found that the turtles of today have far better sight, hearing, and sense of smell than those from millions of years ago. These adaptations and increased brain complexity have allowed turtles to survive and thrive as a species for millions of years.

Although their brains have become more complex, turtles are not capable of performing the same tricks and tasks and mammals and other species. However, this does not mean they are not intelligent.

The way we define intelligence allows for many interpretations of whether or not an animal is smart. In the case of turtles, they are capable of learning through instinct and experience. Their main concern is survival, so turtles learn how to survive, how to get food, and how to stay safe.

To better define turtle intelligence, let’s take a look at the two types of learning they are capable of and how these have allowed turtles to survive for 250 million years.

For example, sea turtles always go into the water at night. This is not a learned behavior, but rather an instinctual one that keeps them safe from predators.

Turtles also know how to seek out the food they need to survive. They have been known to travel quite far to find enough food. Turtles also have a shell that they retreat into when they are in danger or are frightened. Even young turtles know to do this. Like sea turtles retreating into the sea for safety at night, it is an instinctual response.

Along with instinctual learning, turtles also learn through experience. Turtles have been shown to learn how to solve problems such as finding their way through a maze just like a mouse.

Turtles can also learn how to recognize you, especially if you are the person who usually feeds them. This isn’t because your turtle likes you better than anyone else. Instead, it is because they associate you with food and thus, their survival.

Turtles have also been shown to recognize when it is mealtime. For example, if you feed your turtle at the same time every day, they may wait for their food in the spot that you feed them at that time each day.

Breeds of Turtles and Intelligence

There are several breeds of turtles that are commonly kept as pets. These include the North American wood turtle, box turtles, red-eared sliders, and painted turtles.

Of these, the North American wood turtle is often thought to be the most intelligent, primarily because of its ability to rapidly solve a maze.

All of the common pet turtle breeds display instinctual and learned intelligence to some extent. They all show the ability to recognize their owners and remember when it is mealtime.

While turtles may not be trainable like your cats and dogs, this doesn’t mean they aren’t intelligent pets. Turtles have solid instincts that have allowed them to survive for 250 million years. They know when to retreat into their shells, take to the sea, and seek food. Turtles can also learn how to solve mazes, recognize their owners, and remember when it’s time to eat. Next time you feed your turtle, you can appreciate the way he waits for you in precisely the right spot and know that he recognizes that you are a key to his survival.

Is Goldfish Tank Size Important? The Answer May Surprise You!