How Bad are Macaw Bites? (Bite Force, Injuries & What You Need to Know) 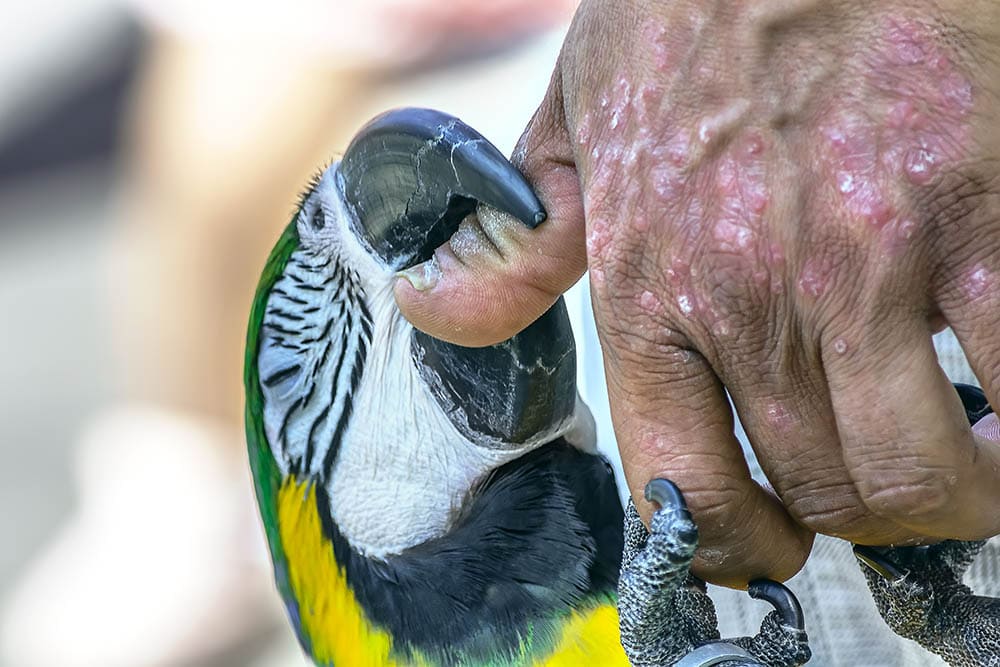 Macaws are majestic birds easily recognized among other parrots due to their colorful plumage and impressive sizes. If you’re lucky enough to have one as a pet, you know how smart, vocal, and surprisingly gentle they are. However, they also have powerful beaks; their bite can lead to serious illness if left untreated. So, although they are not considered aggressive birds, there are a few precautions to take when dealing with such a pet. Read on to find out how bad macaw bites are, how to treat them, and how to keep your bird from biting.

How Strong Is a Macaw Bite?

The force of an animal bite is measured in pounds per square inch (psi). For example, parrots can apply 200 psi of pressure with each bite; this is sufficient to produce significant crush injuries. For comparison, the American pitbull can produce 235 psi, the human 120 psi, and the great white shark can produce 600 psi.

A macaw can produce 330 psi of pressure in one bite, which could easily crack a Brazil nut. Imagine if this pressure is applied to your finger by an angry macaw: it is enough to seriously damage or even break your finger.

Can You Get a Disease from a Macaw Bite?

Yes, you can get sick from a macaw bite (or any bird bite, for that matter). Infectious diseases transmitted to humans from animals are called zoonoses. Here are some of the diseases your macaw can pass on to you through their bite:

Psittacosis is a disease caused by the bacteria Chlamydophila psittaci, found in 40% of birds of all species. Although many infected pet birds show no signs of the disease, they can still pass it through their bites.

If your macaw bites you – even lightly and barely leaving a scratch – and you leave your wound untreated, you are at risk for psittacosis. Indeed, the bacteria that penetrate your skin can cause fever, rash, headache, or dry cough. In most cases, the infection is not severe and can be easily treated with antibiotics. But in very rare cases, it can lead to pneumonia in some people.

Salmonellosis: The symptoms of salmonella in healthy adults are usually limited to diarrhea, abdominal cramps, fever, and vomiting. These symptoms typically go away without the need for treatment. However, people with weakened immune systems – such as children or the elderly – can become seriously ill or even die after contracting the virus. If you think you may be infected with Salmonella, talk to a doctor as soon as possible.

Pasteurellosis: It is the Pasteurella bacteria that causes this disease, which is characterized by a skin infection that can be severe. Humans are most often infected with the Pasteurella bacterium through a bite from a clinically healthy animal and then present a reaction localized to the bite point: red, hot, swollen, and very painful sore.

How to Treat a Macaw Bite?

Treat your injury as soon as you can to reduce infection or other complications. Dealing with a macaw bite is similar to how you treat any other cut, but you should be even more careful with infection due to the source of the injury.

Important: If your wound gets worse, see a doctor as soon as possible. You will probably need antibiotics to prevent any risk of a more severe infection.

How Do You Stop a Macaw from Biting?

Pinching is natural for a Psittacidae. It uses its beak to touch, taste, discover its environment, but also to eat and defend itself.

However, it rarely uses its beak against its fellows in the wild, with whom serious conflicts are rare. Instead, Macaw will bite only to protect itself against snakes and other predators. Thus, biting is not part of his usual instincts. However, typical behaviors in nature are not necessarily adapted to living with humans.

So, if your macaw bites you, ask yourself the following questions:

The important thing here is to target the trigger. Since biting is not normal behavior in the macaw, we can logically deduce that it can be reinforced or stopped with an appropriate method.

Macaws are motivated by the desire to control or to survive. So, they can bite if they are scared, in pain, or experiencing hormonal surges. But sometimes, the bite only happens because your pet bird doesn’t understand what behavior to adopt – he is confused.

So, the best way to avoid possible injury to you is to observe your macaw’s body language:

By showing these signs of nervousness, your bird is telling you that it’s best to wait until later to make physical contact with him.

Use the Positive Reinforcement Method

The best way to stop your bird from biting is to encourage positive behavior. You are the nurturing hand, and as such, identified as an entity dominating the clan. The embarrassing behavior will be discouraged in the first place by a marked disapproving look. The empathy felt by these feathered beasts is such that your attitude will not go unnoticed. You will accompany this with a “no” (curtly and without shouting).

Then lift it onto your hand, accompanying the movement with one word in a soft but firm voice, then onto the other, and repeat three to four times. This is called “the ladder”. This peaceful maneuver aims to make him understand that you are THE reference member of the group, unlike him.

Above all, never have a violent reaction towards your winged aggressor, as you will permanently distort your relationship with him. Slapping on the beak and saying “no” also has no effect, as studies have shown that pecking is part of parrot play. The screams that go with them are also an inappropriate response since they will see it as a game.

How to Teach Young Macaws Not to Bite

Young birds have no idea how strong their beaks are, especially if they have been isolated from their siblings. In addition, play between the beak and human fingers is not recommended because cries of pain are perceived as stimuli in a game. Without knowing it, you are teaching your bird to bite.

Because, unlike us, macaws seem to like being shouted at because it resembles their mode of communication. Therefore, the cry is for them a positive response to a given behavior. Imagine their joy when they pinch a chubby finger and hear your cry; it becomes a fantastic game for them!

Much like cats and dogs, untrained or poorly trained macaws can develop aggressive behaviors such as biting, which can inflict a wide variety of injuries, ranging from superficial puncture wounds to open fractures due to the crushing action of the bird’s beak.

But with a bit of patience and using the positive reinforcement method, you can stop your macaw from biting and prevent yourself from possible serious injury. In any case, do not hesitate to consult a parrot specialist or an avian veterinarian.

Genevieve is a biologist and science writer. Her deep love for capuchin monkeys, pumas, and kangaroos has taken her worldwide to work and volunteer for several wildlife rehabilitation centers in Bolivia, Guatemala, Canada, and Australia. As a Canadian expat, Genevieve now lives in Argentina, where she wakes up every morning to horses and cows saying hello from the vast plain next to her home office window. She is the proud mom of three rescued dogs, Lemmy, Nala, and Pochi, and a frisky kitten, Furiosa. Having the privilege of sharing her knowledge and passion for animals of all kinds is what makes her fulfilled and happy.