10 Parrots That Are Endangered (With Pictures) 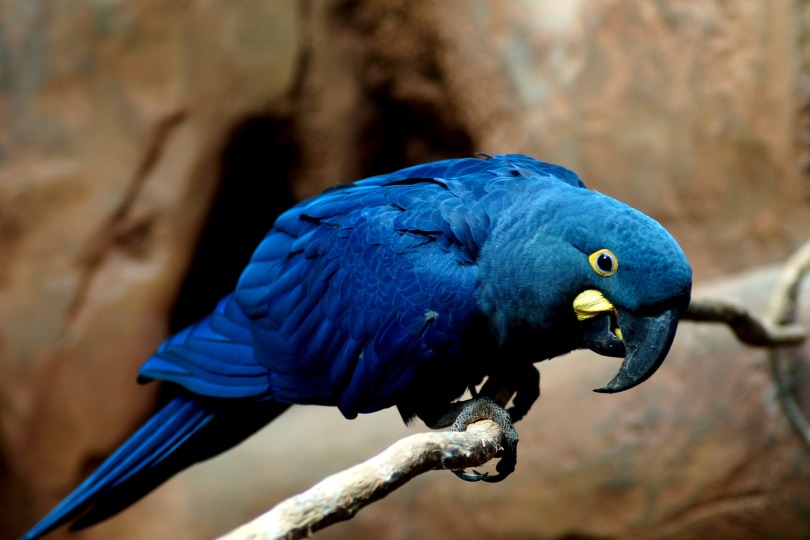 While there seem to be plentiful parrots in existence today, some breeds have been recognized as endangered and may not remain in existence for much longer if current conditions for them persist. Several types of parrots are listed as endangered for one reason or another, and all deserve attention and understanding. Here are 10 parrots that you should know about and why they are considered endangered.

These parrots live in Australia and are considered one of the most endangered parrot types on the planet. The danger comes from various issues, including habitat degradation, disease, and the introduction of predator species to their environment. It is extremely uncommon to spot one of these birds in the wild today.

Due to the great loss of this breed’s natural habitat and trapping, the Philippine Cockatoo rapidly declined in numbers for a time. At one point, these birds were almost extinct, but their numbers increased once protective habitats were created. However, there are still few of them in existence, and they are still considered critically endangered.

There are only about 1,300 Lear’s Macaws alive today, all of which are known to live in Brazil. These noisy yet beautiful birds enjoy life in a controlled, protected habitat, where biological field stations have been set up to study them and learn how to help their numbers increase. The protected land also helps keep poachers away and encourages responsible eco-tourism.

It is devastating that the Spix Macaw lives only in captivity today due to deforestation, poaching, trapping, and trading. While these birds have been labeled as extinct in the wild, up to 100 of them live in captivity, where they are being studied, bred, and protected in hope of increasing their numbers and someday releasing them back into the wild, where they can proliferate.

This is a critically endangered parrot breed that is getting help from scientists, conservationists, and volunteers to increase their numbers and fight extinction. With just about 200 left living in the wild today, every effort to preserve the Kakapo is welcome in New Zealand, which is the only place in the world where the bird lives.

The yellow-eared conure was considered extinct until the late 1900s, when a group of them was discovered in Columbia by researchers. These birds have been listed as endangered since then, although their population is increasing slowly but surely. With any luck, this parrot will flourish enough to be removed from the endangered list in due time.

These parrots have been on the endangered species list since the 1960s, when only about 70 of them were known to be living in the wild. Numbers continued to dwindle until conservationists started breeding them in an attempt to save them. Today, more than 300 Puerto Rican Amazons live in captivity, and up to 100 of them are living in the wild.

The cape parrot is considered one of Africa’s rarest parrots, and there are thought to be fewer than 1,000 living in the wild today. Their population is stable, but deforestation and poaching are concerns that can quickly threaten the remaining birds living in their natural habitats. Many are living in captivity as pets, but there are no official organizations running breeding programs to try to increase their numbers in the wild.

Northern Columbia has always been home to the Sinu parakeet, but it is feared that their extinction is right around the corner if it has not happened already. It has been decades since anyone has recorded spotting one of these birds in the wild, although experts believe that since they live in mostly unexplored forests, there are likely up to 50 of them still living in their natural habitat.

Hailing from Indonesia, the blue-fronted lorikeet is rarely seen in the wild. In fact, one was not seen or recorded for decades until 2014, when a photographer was able to spot and take pictures of a pair. It is unknown how many are still in existence today, but it is feared that they are on the verge of extinction.

Why Do Parrots Become Endangered?

Unfortunately, parrots become endangered for various reasons that are the result of human actions. For instance, many parrots become endangered because their habitats are being destroyed by farmers and developers. Many parrots are captured and poached, dwindling their numbers at an alarming rate. Other factors also come into play, such as climate change, pollution, and disease proliferation.

Parrots are beautiful animals that deserve the opportunity to flourish like any other living being on this planet. Sadly, some parrot breeds are not having an easy time. Learning more about the reasons for endangerment and the steps that you can take to help protect parrots can go a long way in making sure that other parrot breeds do not end up on any endangered lists.

Rachael has been a freelance writer since 2000, in which time she has had an opportunity to research and write about many different topics while working to master the art of fusing high-quality content with effective content marketing strategies. She is an artist at heart and loves to read, paint, and make jewelry in her spare time. As a vegan, Rachael is obsessed with helping animals in need both in her community and anywhere in the world where she feels she can make a difference. Animals also happen to be her favorite topic to write about! She lives off the grid in Hawaii with her husband, her garden, and her rescue animals including 5 dogs, a cat, a goat, and dozens of chickens.

How to Bond with Your Conure (4 Proven Tips)