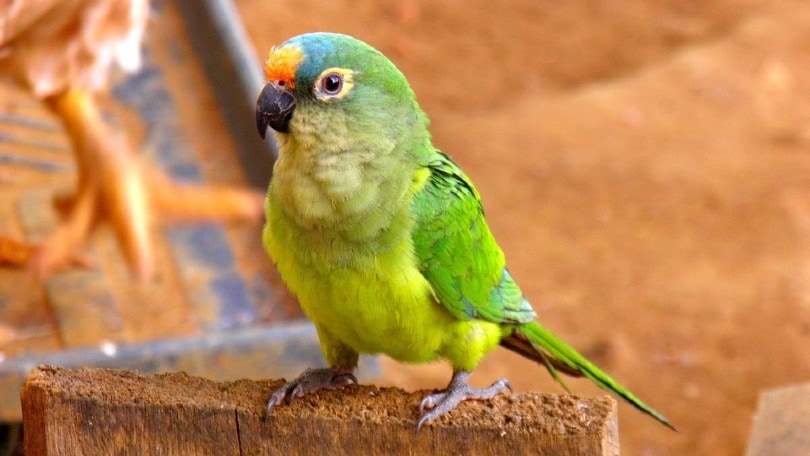 The world of birds is a beautiful one that we are only just beginning to understand. There are many different species of birds, each with its own unique traits and attributes. Whether you’re looking for an active pet or something more docile, there’s a bird out there for everyone!

Our goal in writing this blog post is to inform readers about nine small parrot species they may or may not have heard of before. Owning a smaller bird comes with its fair share of benefits, including being able to carry them around in your pocket or handbag. Smaller birds are also a fantastic option for novice bird owners, as they can be easier to care for and more forgiving than larger birds.

Many different small parrot species make wonderful additions to any household. Some of our favorites include the following:

African lovebirds are loving, social creatures that have a lot to offer. These parakeets are the ideal size for keeping in an apartment, and they love being held like a baby. African lovebirds need at least one other bird to play with, as they can become lonely otherwise.

African lovebirds are very quick learners and can pick up on tricks and commands after a short while. You should always supervise small children with African lovebirds since they may bite if handled too roughly.

They range in size from 5 to 8 inches long, weigh approximately 40-60 grams, and live anywhere from 10 to 20 years. African lovebirds are native to Africa, but they have been introduced to other parts of the world as well due to human activity. In captivity, they can be trained to talk and even perform tricks.

Brazilian parrotlets are small, energetic birds that can be kept indoors or outside. They have a fairly quiet call and don’t make much noise unless they’re in an area where other birds are around.

These little guys are known for their vibrant color and sweet personality. They can be trained to talk, but their voices are not always the most pleasant-sounding compared to others on this list.

They range from 6 to 7 inches long, live ten or more years, and only weigh about 30 grams. Owners commonly praise these parrotlets for their willingness to learn and please.

Brazilian Parrotlets are native to South America, but they’ve also been introduced to other parts of the world due to human activity. They can be taught a wide array of cool tricks, including playing fetch.

The quaker parakeet is a common sight in Central and South America. Still, they’re equally as popular worldwide due to their easy nature, sweet personality, and relatively small size compared to other birds on this list.

Quaker parakeets are known for their beautiful coloration. Their plumage consists of various bright colors, including green, blue, yellow, and red.

These little guys are perfect for apartments or other small spaces. They’re rather calm compared to many species on this list and don’t tend to be as high-maintenance either.

As their name implies, these birds have rather striking red faces. These parrots travel in flocks, and they often land on the tops of trees as opposed to their branches.

These are considered some of the most colorful birds found in South America, where they’re native. Unfortunately, their natural population is currently decreasing at an alarming rate.

Red-faced parrots can be trained to say words, but their voices are not as clean or crisp as some of the other species on this list. They’re known for spending a lot of time in flight during the day and resting quietly at night.

At 13 inches long, they might be slightly longer, but keep in mind that more than half of that is the tail. Red-faced parrots weigh approximately 200 grams, and live an average of 25 years.

Rose-ringed parakeets are one of the most popular species of birds found around the world today, and that popularity stems from their adorable appearance and amazing personality. They’re entertaining to be around, but they can also be a huge handful for owners new to keeping birds.

These parakeets come in three color varieties: grey-white, white-grey striped, and white with dark blue on the head and the back. All three of these color variations look lovely!

One major benefit to owning a rose-ringed parakeet is its beautiful colors that come in variations of blue, yellow, pied, albino, and others. They weigh about 130 grams, are about 10-15 inches long, and live approximately 20 years.

These birds can be taught to talk, though it requires a lot of patience and training. When it’s time to relax, you’ll typically find these birds quietly resting on a perch.

Probably the single most popular species on this list, the sun conure is the most common small parrot you’ll find in pet stores. They’re known for their relatively easy nature and stunning appearance.

These birds are native to South America, typically range from 6 to 10 inches long, weigh about 100 grams, and live approximately 15-30 years on average.

You can teach these birds a wide variety of tricks, including walking up and downstairs, playing fetch, and even doing yoga! Controlling them can be a challenge for beginners, though.

The Senegal parrot is native to the Asian and African regions of the world. Despite being native to warm climates, these birds can handle colder temperatures better than many other species on this list if they’re given appropriate care.

These are small to medium-sized birds that average about 8 inches long, weigh around 100 grams, and live approximately 20 years as a result of proper care.

Their feathers are somewhat unique in that they’re shorter than many birds on this list. This gives them a much rounder appearance, but it also helps them to stay warm!

Also known as the all-grey, these birds are native to Africa and considered one of the most intelligent species on this list. When raised with plenty of attention from an owner that is willing to spend time training them, they can become naturally tame.

Their playful nature makes them a favorite among many pet owners as well. This parrot averages about 7 to 8 inches long, weighs about 200-300 grams, and lives 20 years on average.

They’re also one of the few species out there that can be taught to swim in a pool or bathtub because they have webbing between their toes. They’ll even enjoy it!

It’s not only possible to teach them how to talk, but their voices are also typically recognized as one of the best you’ll find among small parrots.

Also known as the Barnardius, these birds are native to Australia and have been popular pets for a long time. They’re known for being some of the most affectionate species on this list as well.

When it comes to their appearance, they typically have dark plumage with a unique orange ring around their neck. They typically average about 10 inches long, weigh about 100-150 grams, and have a lifespan of approximately 20 years.

These birds are also known for being relatively quiet compared to many other species out there. However, if they get excited, you’ll know it! These colorful birds look absolutely fascinating and make great pets for anyone looking to add a little color into their lives.

A lot of owners will keep these birds in pairs because they like the company. In fact, when you’re thinking about owning one of these pets yourself, it’s usually easier to buy two from the same breeder at once!

Where to Find a Small Parrot?

There are many ways you can go about adopting a pet parrot. If you want something small, you’re in luck because there are plenty of breeders out there who breed small parrots.

However, you might also want to consider adopting a bird from an animal shelter or rescue organization if you can’t afford a breeder’s price tag. These organizations don’t receive any funding compared to pet stores that sell animals for profit, so your donation will go straight towards helping additional animals find homes!

Keep in mind that adopting from shelters takes patience because not everyone has small birds available at any given time; adoption services usually have a lot of applications being processed at once, and your bird might also not be socialized enough to be handled by anyone.

In conclusion, these were nine of the most popular species of small parrots you’ll find around the world today. Their popularity has a lot to do with their overall appearance and behavior and because they’re relatively easy to care for. You don’t have to be a professional to take good care of one of these beautiful birds!

If you’re interested in adding a small parrot to your household, make sure to know the basics of caring for it. Our blog is full of guides and resources on different species, so help yourself!

Dead Chicken in The Coop? Here’s What to Do (Step-by-Step Guide)

7 Most Exotic Pet Birds (With Pictures)