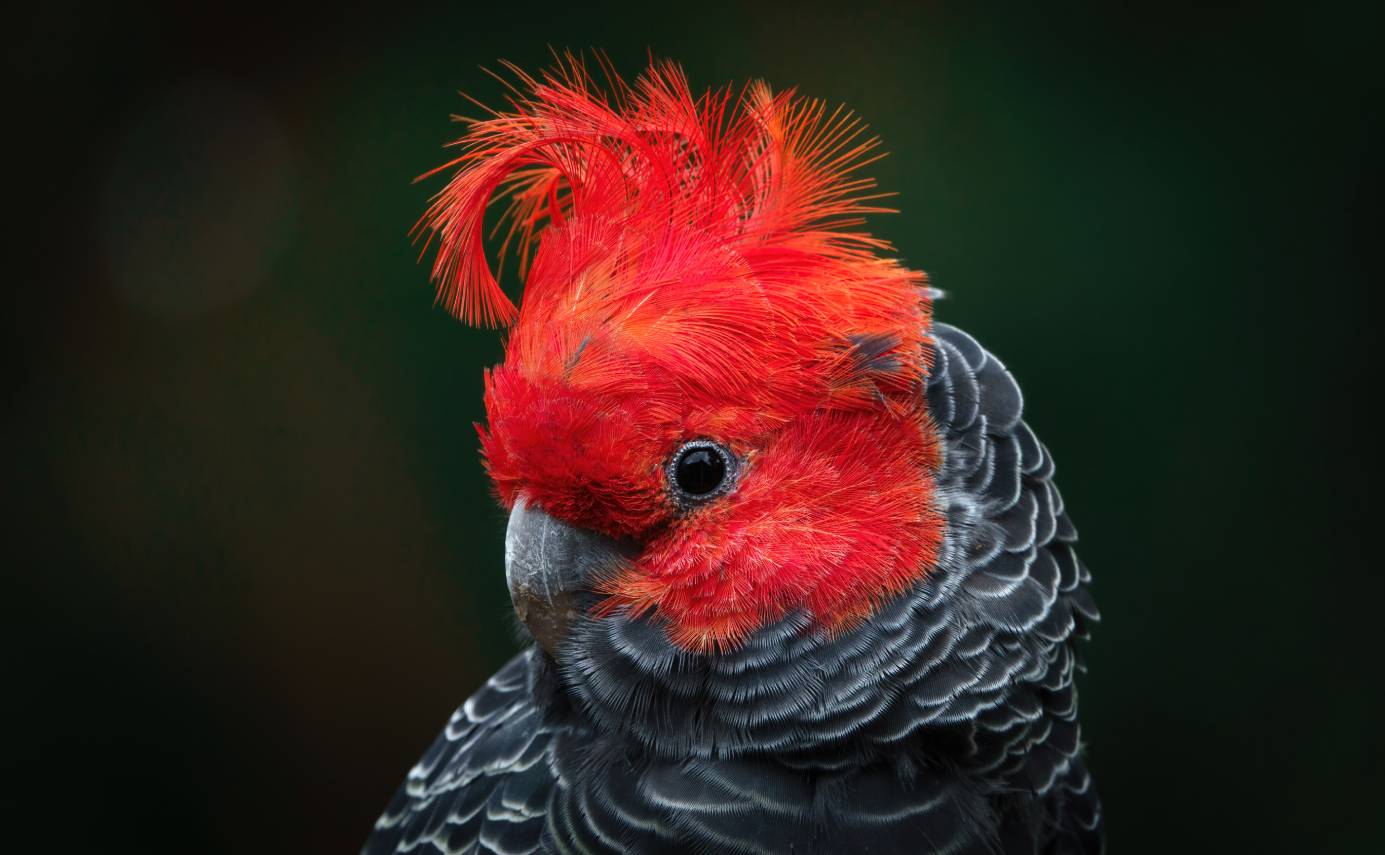 Prepare yourself to meet one of the biggest goofballs in the pet parrot world, the Gang-Gang Cockatoo or Gang-Gang as it’s also called. The silly-acting Gang-Gang is native to Australia’s cooler and wetter forests and woodlands.

This small and stocky parrot is a distinctive and charismatic bird. These cockatoos are mainly slate gray. The males are easily identifiable by their bright red ‘helmet’ and a fluffy crest while the females are mostly gray with feathers edged with pink on their bellies.

The Gang-Gang Cockatoo is found in southeastern Australia and is endemic to this region.  At one time this bird inhabited King Island off Tasmania but has long gone extinct there. On Kangaroo Island, the Gang-Gang is an introduced species.

The unusual name Gang-Gang originates from a New South Wales Aboriginal language. The bird’s name is in reference to its long rasping call which sounds like a rusty door hinge or the twist of a corkscrew.

The Gang-Gang is such a distinctive, beautiful bird that it is used as an emblem for the Australian Capital Territory (ACT). It’s also part of the Canberra Ornithologists Group and ACT Parks emblems.

The Gang-Gang Cockatoo is a lively and intelligent parrot that’s often nervous in captivity. This bird is prone to feather picking when stressed or bored, making it suitable mainly for experienced parrot owners and breeders.

In the wild, the Gang-Gang has been described as the clown of the treetops as these birds are comical to watch. When in captivity, this playful bird spends lots of time playing with toys inside its cage.

Every day is a fun day when you own a Gang-Gang! Even if you’re not in the mood for silliness, your Gang-Gang Cockatoo will be. This bird can often be heard mumbling and whispering to itself while playing with its toys. A Gang-Gang has an affectionate side too as it enjoys snuggling with its owner and getting its head scratched.

Sitting idle isn’t this bird’s thing. The Gang-Gang loves getting attention from its owner for extended periods. This means anyone planning on getting a Gang-Gang should be committed to providing this bird with plenty of attention.

The Gang-Gang is a talkative bird that likes to make noise! However, when compared to other cockatoos that are raucous and very loud, the Gang-Gang is not as intense. This cockatoo has a unique call that resembles a creaky door being opened. A Gang-Gang can learn how to mimic some basic sounds and repeat short phrases which typically include their name.

The Gang-Gang Cockatoo is a bird that’s very receptive to vocal stimulation. People with Gang-Gangs know that these birds love being talked to and enjoy every second of attention they get.

It’s hard to mistake a Gang-Gang for another cockatoo because it’s the only cockatoo with a curl crest on top of its head. Adult male Gang-Gangs have gray bodies. On a male’s upper part, the edges of the feathers are white and on the under parts the feathers are edged in yellow. The male has a bright red head with a sloping crest.

Female Gang-Gangs are strikingly different from their male counterparts. Females have gray plumage overall, including the head and crest. The upper parts of the female are barred orange to pale yellow/green. The female’s under tail feathers are barred white.

The Gang-Gang has a horn-colored hooked bill. This bird’s eyes are dark brown and are surrounded by a gray eye ring. The legs and feet are dark gray. Juvenile Gang-Gangs have coloring similar to the females of the species, with a shorter crest that is slightly red-tipped in young males.

Caring for the Gang-Gang Cockatoo

A Gang-Gang Cockatoo should be kept in a strong cage made of iron or steel that can stand up to this bird’s powerful beak. This bird requires a cage that’s no smaller than 36” W x 24” D x 48” H so it has plenty of room to move around. As a diurnal bird, the Gang-Gang needs 10-12 hours of sleep a day.

This is a playful bird that needs toys in its cage to keep it occupied. As a bird that’s prone to feather plucking when bored or stressed, it’s essential to give this bird plenty of attention while keeping its environment stress-free. Don’t allow other pets like cats or dogs near a Gang-Gang’s cage and keep small children away unless you’re there to supervise.

Like other cockatoos, Gang-Gangs produce feather dust that’s used when preening. Although useful to the bird, this fine dust can spread throughout your home and trigger allergies in certain people.

Gang-Gangs do best with another bird or in groups. If you’re interested in this bird species, consider getting a pair. If you already have a Gang-Gang and want another, be sure to introduce the birds slowly. It’s best to separate the birds at first by putting them in their own cages. Place the cages side by side so the birds can get acquainted before housing them together.

Like other cockatoos, Gang-Gangs are prone to neurotic behavior including feather picking and self-mutilation if stressed. Another common health issue facing these birds includes psittacine beak disease that’s a virus that attacks the bird’s immune system.

Bumblefoot is another disease Gang-Gangs can get wherein painful lesions develop on the feet. These birds are also at risk for obesity when living in captivity simply because they don’t typically get enough physical activity.

If you plan on getting a Gang-Gang, it’s important to keep a close eye on your bird to watch for signs of health issues. Gang-Gangs aren’t the easiest birds to keep in captivity because they’re easily stressed. A stressed Gang-Gang is more susceptible to illness and a bird that’s likely to pull out its feathers or even the feathers of another bird.

In the wild, Gang-Gangs feed in the canopy of treetops and shrubs, enjoying many seeds, insects and their larvae, and fruits. Gang-Gang Cockatoos are one of the few bird species that enjoy eating sawfly larvae in large quantities. When this bird makes a soft growling sound as it eats, that’s a sign it is enjoying what it’s dining on!

When kept as a pet, a Gang-Gang should be fed a pellet diet supplemented with fresh fruits and vegetables. This bird also likes to snack on almonds, filberts, and macadamias. If you plan on giving your Gang-Gang seeds and nuts, do so in moderation as these treats are high in fat.

Pellets can make up half of the diet of a Gang-Gang Cockatoo with fresh vegetables, fruits, and grains making up the rest.

True to the nature of cockatoos, Gang-Gangs like to chew and destroy things so bird toys are necessary. This bird enjoys climbing on tree branches, rope toys, and playing with bells and cardboard. This type of parrot prefers toys that hang and those that can be picked up with its feet. Just be sure any toys you provide a Gang-Gang are safe and secured properly so the bird doesn’t become injured.

A Gang-Gang Cockatoo enjoys spending time outside its cage each day. A three to four hour play session outside the cage is best, along with some interaction from you.

Where to Adopt or Buy a Gang-Gang Cockatoo

Because Gang-Gang Cockatoos are rare in the United States, finding one to adopt or buy isn’t always easy. Start by looking at bird adoption websites or try to find a breeder near you. Scarce species like the Gang-Gang tend to be costly with prices ranging from $1,000 – $1,400.

Feel free to check out a few birds before buying one. Most sellers and breeders are more than happy to answer any questions you may have. Remember that the Gang-Gang you buy could be yours for decades so make an informed purchase! Be sure the bird you buy is healthy and used to being handled by people.

Gang-Gang Cockatoos are beautiful birds full of fun and mischief! A Gang-Gang is sure to provide you with years of entertainment. This chatty, personable bird is best suited for an experienced parrot owner or breeder because it is prone to feather-picking if it’s not happy.

Choose your new bird with care and if possible, buy two. The Gang-Gang is at its happiest when living with another Gang-Gang. If you get a pair, be sure to house them in a roomy and sturdy cage so they’re happy and safe.