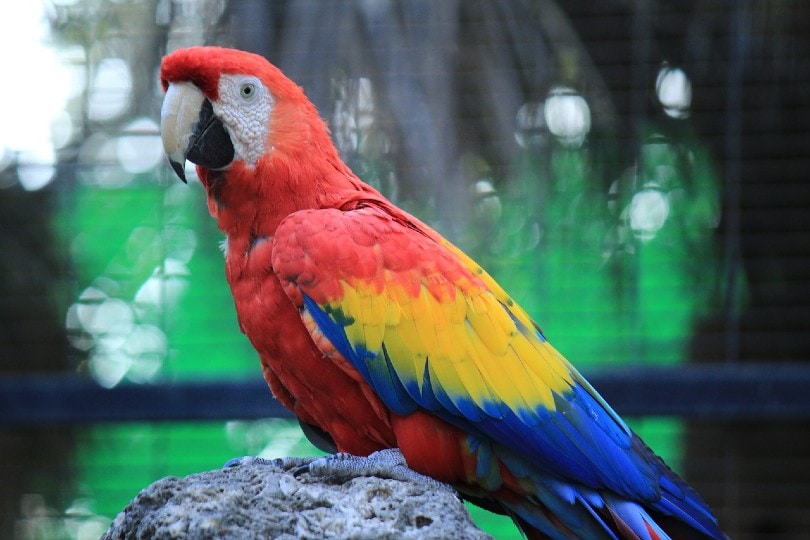 Native to the South and Central Americas, the Scarlet macaw will enthrall you with its vibrant personality and beauty! This large parrot is both intelligent and affectionate that makes a great companion for you and your family.

Here, we discuss the Scarlet macaw in detail to see if this is the right parrot for you!

Native to the tropical rainforests of Central and South America, the Scarlet macaw is the largest parrot in the world. It thrives in in humid environments at elevations of around 1,000 to 3,000 feet. The scarlet dwells in the topmost layers of trees, taking advantage of the thickness of the forest to protect themselves against predators. Depending on the region, the Scarlet macaw has different subspecies classified based on size and coloration.

Due to their size and habitat, the Scarlet macaw’s are not easily predated, however, active conservation efforts such as The World Parrot Trust formed in 1989 are implemented by various organizations due to deforestation and illegal poaching.

Although they initially draw attention with their colorful plumage, it won’t take long for you to find that their personalities are just as colorful! Scarlet macaws are energetic and intelligent birds. In the wild, Scarlet macaws live in small flocks, but are monogamous in terms of bonding. Because of this, they tend to form an affectionate bond with their owner and are known to be great companions.

Because of the Scarlet’s need for companionship, it is required that they receive ample attention and interaction everyday to avoid neurotic or aggressive behaviors. Proper socialization is also needed as they may become “one-person” birds due to their monogamous nature. They can also be noisy and like all macaws, the Scarlet can also learn to talk so be prepared for a big talkative bird seeking for attention in the house. With proper training, socialization, and interaction, the Scarlet macaw can be a great pet and companion!

With an eye-catching appearance such as the Scarlet macaw, this bird does not have to talk! But, like other macaws, the Scarlet is a very competent and confident talker itself. They are intelligent, so they love to learn tricks and can actually have a vocabulary of up to 5-10 words and phrases. These birds love being the center of attention and they may do more screaming than talking.

The Scarlet macaw, however, can be very noisy so if you are sensitive to loud noises or live in an apartment/condominium, then this bird might not be recommended for you.

The Scarlet macaw derives its name from its appearance and is considered one of the most eye-catching beautiful birds in the world. The Scarlet macaw’s body is a dominantly vivid red, with blue and yellow feathers around the edge of its wings. Small streaks of green may also be found where the blue and yellow colors meet. The Scarlet’s face is creamy white around the eyes and horn-colored on the beak, with the bottom part of its beak being black. The combination of beauty and personality makes the Scarlet macaw a good choice for experienced and beginner pet owners alike!

Caring for the Scarlet Macaw

Being a large bird, the Scarlet macaw requires a larger-than-usual cage. It will need space to move and daily out-of-cage play time. The Scarlet macaw are active birds, so be sure to provide toys and swings so they can play and chew. Scarlet macaws have a self-mutilating tendency when placed in confined spaces if not given the opportunity to chew and play, so try to provide the best environment for you Scarlet!

Scarlet macaws, in the wild, live in flocks but are monogamous in terms of bonding. It is not necessary to have more than one Scarlet, but regular interaction and attention is required as they can also develop neurotic and aggressive behaviors when not socialized properly. Being monogamous in nature, they may develop to become one-person birds, so it is important to socialize them with different people and situations at a very young age.

Bathing can be done with a light hose down or gentle spraying with lukewarm water once a week. Trimming their primary wing weathers is also recommended to prevent them from flying out of the door or windows, but not enough that they are prone to falling. Because of their size, Scarlets also constantly defecate, so it is recommended that their cages are regularly scrubbed and cleaned to prevent your house from smelling and also to maintain a clean environment for your Scarlet macaw.

The Scarlet macaw is prone to many health complications which can come from both pathologic and non-pathologic causes. Although prone, however, they can be prevented with proper care and diet!

They are prone to diseases such as Macaw Wasting Syndrome that affects the digestive and nervous system, infections such as parrot fever and Psicattine beak and fever disease. They are also prone to other nutritional diseases, so it is recommended that they are given a high quality, balanced diet and a clean environment to prevent such diseases.

Macaws in general are prone to self-mutilating behaviors when they feel neglected, stressed, or when they lack mental stimulation so providing your Scarlet a loving environment is important. They are also prone to overgrown beak/beak malocclusion, which can be prevented by providing toys for them to chew on.

In the rainforest, the Scarlet macaw has a strong beak which allows them to feed on nuts, seeds, berries, and leaves. As pets, the Scarlet generally has a similar diet which can easily be obtained through a high-quality parrot mix which consists of different seeds, nuts, and dried fruits. There are different high-quality parrot mixes can be found on chewy.com, it is good to experiment and find out which one your Scarlet macaw likes!

In addition to a parrot mix, adding in fresh fruits and vegetables is recommended. Avocado and chocolate must be avoided as these are toxic to Scarlet macaws and may lead to health complications.

On average, a Scarlet macaw will consume 10-15% of their body weight daily, usually 1-1 ½ cups of food every day. It is recommended that they be fed in the morning, and that fresh fruits and vegetables that are left uneaten after an hour is removed to prevent your bird from eating spoiled food.

Their cage should be on the larger side, and providing them with a play gym, swing, or cargo net within the cage is also recommended to give them opportunities to move around while inside the cage.

Aside from movement, Scarlet macaws love to chew. Giving them a rotation of toys to chew on is recommended to satisfy your Scarlet’s chewing needs and also promote beak health!

Where to Adopt or Buy a Scarlet Macaw

Like most macaws, you can purchase a Scarlet macaw through an avian-only store or through bird breeders such as Bird Breeders. They can cost around $3,000-$6,000 and may vary depending on the bird’s history, breeder, care, and many different factors.

When deciding to purchase your very own Scarlet, it is very important to interview your seller and perform a background check on both the bird and the seller. Important questions may include the credibility of the breeder, the history of the seller and the bird, reason for selling the bird, and the behavior or health complications of the bird.

As there are many conservation efforts for the Scarlet macaw due to illegal poaching and deforestation, you can also adopt a Scarlet macaw through rescue or adoption agencies such as Free Flight Birds, Adopt a Pet, and Toucan Rescue Ranch.

The Scarlet macaw is considered one of the most beautiful birds in the world, and along with its beauty, comes an incredibly charming personality! Because of the Scarlet macaw’s social and activity demands, this bird may not be recommended for people in apartment complexes or for those who are seldom home. But if you are willing to commit to the demands that come with caring for a Scarlet macaw, they will surely make a great pet and ultimately a great companion!

Do Pigeons Make Good Pets? What You Need to Know!