Is There a Purple Macaw Species?(with Pictures) 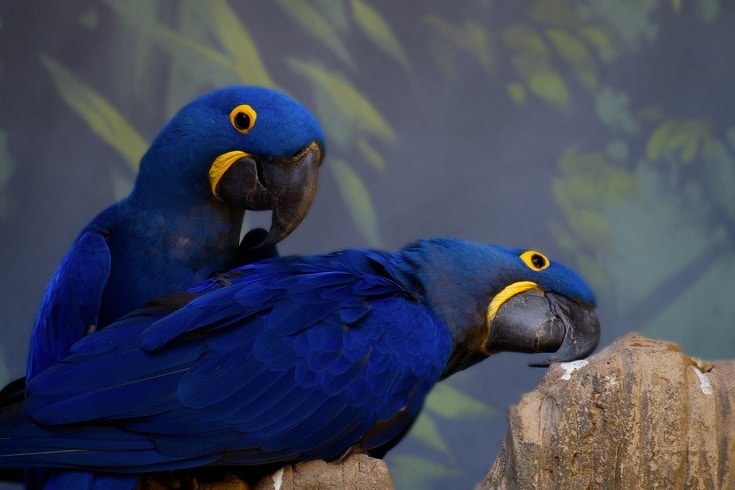 Macaws are famous for their beautiful feathers and various colors that captivate bird lovers. Purple in macaws is complicated and there are a lot of different names for this type of color. Many people believe that there are no such species of purple macaw that exists. If there was, wouldn’t they be more known due to their special color? Well, the color does indeed exist in its form, but it is not a true color or a valid name for the species of macaw. The purple macaw is not a typical species kept as pets due to its extreme size and they are rather displayed in zoos.

The actual color does not directly look purple, however, the genus and tones are what gives this macaw their unique names besides purple:

This article will inform you on everything you need to about this rare coloration and where they originate from.

Purple-colored macaws are not entirely real; however, they are not scientifically referred to as purple macaws which are where most of the confusion comes from. Purple macaws are correctly called hyacinth macaws (Anodorhynchus hyacinthine) which are real, and the largest species of parrot kept in captivity. You see, the enigmatic purple macaw has not been seen or captured to be documented as a definite color and there is no proof that an entirely purple macaw exists. The rare violet hyacinth macaw appears as a light shade of purple under bright lights which can lead people to believe that the color is entirely purple.

Hyacinth parrots look like a mixture between a dark blue and a dark shade of violet. The colors change slightly under different light settings and can sometimes appear as an iridescent hue. These are very attractive parrots and their color is mesmerizing.

The hyacinth macaw grows to an extreme length of 40 inches. This is quite an overwhelming size for many bird owners. There is a lot of pressure to provide them with a large cage that does not easily fit in many households. Hyacinth macaws need a large enclosure outside underneath a tree with shelter from the elements. The best option is to keep them in large aviaries that can be constructed in a garden.

Where Do Purple Macaws Originate from?

This parrot originates from central to eastern South America where they spend most of their time in palm trees. Their primary diet is palm nuts alongside different fruits and insects. These macaws can also be found in parts of Brazil, north-eastern Paraguay, and eastern Bolivia. They prefer to live in lightly forested areas so that they have enough space to fly between leaves and branches. They inhabit palm swamps and flooded grasslands. Most hyacinth macaws live in the Pantanal region of Brazil which is why they are also referred to as the ‘Rio’ macaw.

How Much Does a Purple Macaw Cost?

The overall price of a typical macaw parrot varies. They can cost between $500 to $1000 depending on the color, species, and size. The hyacinth macaw costs around $1500 to $2000 due to its uniqueness. This color form can only be obtained through a skilled breeder who can produce the perfect violet coloration in their parrots.

Once tamed, these macaws make very friendly and interactive pets. They should be tamed from a young age for optimal tameness. They can be boisterous when they become agitated or are in the Presence of an unfamiliar pet or human. Do be careful, these large parrots can have a nasty bite! Their beaks are typically the size of an average human thumb.

When they are kept in the right environment with plenty of toys and enrichment, they will settle into their environment and become a long-term commitment pet.

Hyacinth macaws are very vocal and make various noises throughout the day. This is one reason that they make poor pets alongside their space requirements, and the noise can be heard from kilometers away. They are known to be quite the attention seekers and will screech until they are interacted with.

Now you know why the purple macaw is both real and fake. The true name and color can easily get mixed up. These can be lovely pets when cared for properly. Once they have been provided with the appropriate environment and lots of love from their caregiver then they can become fun and trouble-free pets.

We hope that this has helped clear up any misinformation about the purple macaw!