How to Read Macaw Body Language (With Pictures) 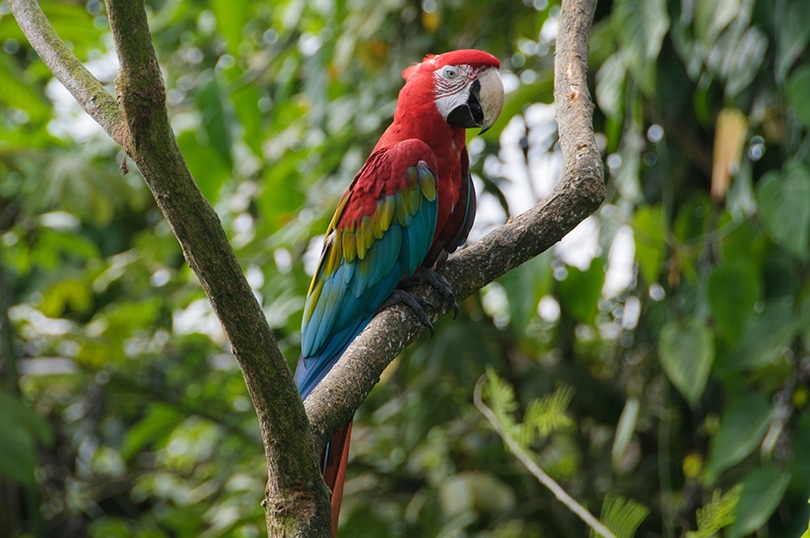 Macaws can be chatty, loud, and noisy at times, but one of the best ways to gauge your Macaw’s mood is by their body language. It can take a while to learn to read your parrot’s body language because it is sometimes subtle and highly contextual, but the longer that you spend with your Macaw, the better you’ll learn their moods.

Learning to read the body language of your Macaw is the fastest way to form a solid bond with your bird. You’ll also be able to quickly tell if they’re happy, annoyed, or ill, and it could help you avoid getting a nip on the finger! Here are a few guidelines, separated into each major body part, to help you better understand your Macaw’s body language.

In the wild, parrots use a variety of sounds to communicate with other birds, such as warning about predators, attracting mates, and protecting their territory. When they are in captivity, this is also the primary means by which they’ll attempt to communicate, alongside various forms of movement and body language.

Here are a few common uses of vocalizations:

Although it may come as a surprise to many, Macaws have expressive eyes. The biggest sign to look out for is eye pinning, in which your Macaw increases and decreases the size of their pupils rapidly. They will always do this when they feel threatened or are protecting their territory, but they are also known to do this when they are curious or excited too. Dilated pupils are usually a sign of a relaxed Macaw, as are partially closed eyes, but pinning may result in a bite!

You’ve likely noticed your Macaw bobbing and swaying their heads from time to time, and this is usually a good sign. Baby Macaws will commonly sway their heads to get fed, and adults may do the same with their owners when they’re hungry. Most of the time, head bobbing and swaying are signs of contentment and playfulness, but if it’s accompanied by body language like an open beak, forward-craned neck, or open wings, your Macaw is likely warning you to stay away.

Some Macaws may also quake or shake their feathers at times, and this can indicate that they are frightened, excited, or threatened, and you’ll need to assess the rest of their body language to work out exactly how they are feeling.

You can tell much about your Macaw’s mood by their legs. Crouched legs are typically an indication that your Macaw is about to take off or pounce, either to attack or come in for some attention. Some Macaws may tap their feet or toes as a signal of dominance over their territory, but this is usually only when they feel threatened.

The way that your Macaw moves their tail can tell you how they’re feeling. They often wag their tails similar to a dog to indicate that they are happy or excited, but this may also indicate that they are about to defecate, so watch out! When your Macaw has exercised, they may bob their tail because this helps them catch their breath, but tail bobbing without any exercise may be a sign of respiratory illness. Tail fanning may occur occasionally, but only as a sign of dominance when your Macaw feels threatened.

Wings are used for flying and as communication tools. Simple wing flapping or flying in place is usually a sign of happiness or contentment, but wing flipping can have various meanings depending on the other body language that you observe. Your Macaw may be angry, in pain, or just looking for attention or a treat!

Learning to read the body language of your Macaw can have several benefits, including having faster training and better care, preventing aggression and biting, identifying illness, and of course, forming a stronger bond. Learning all the various ways that your Macaw uses their body to communicate is a vital part of making sure they are healthy and happy and forming a close bond and friendship with you that will last a lifetime!

What Do Ball Pythons Eat in the Wild & As Pets?