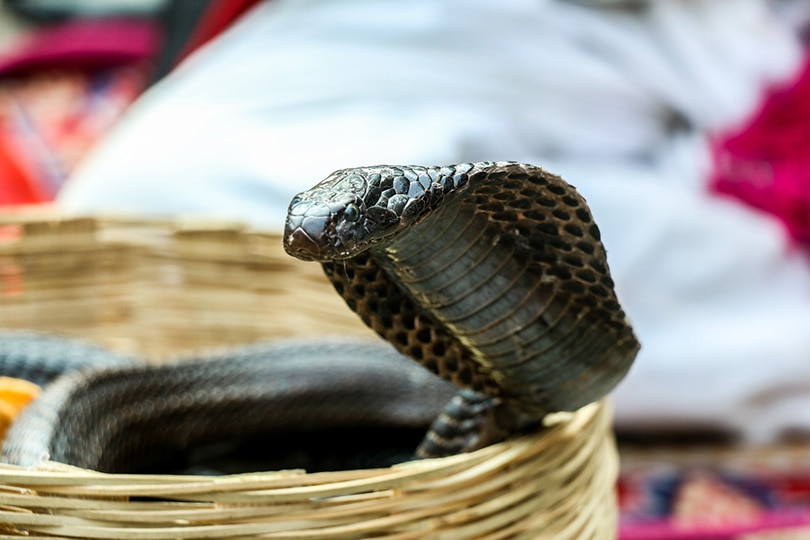 People are fascinated with reptiles. Owning one usually leads to owning another, as many reptile keepers can tell you. The search is always on for the rarest and most exotic animal that one can care for, which can lead to the acquisition of reptiles that are dangerous to humans.

This has made people wonder if a King Cobra would make a good pet. If they can care for other snakes, they should be able to care for this one too, Right?

Not quite — we certainly don’t advise getting a King Cobra as a pet, but don’t just take our word for it. There are many reasons that this isn’t a good idea.

Like many other venomous snakes, the King Cobra will only tend to attack if it feels that it must. To protect itself or its eggs, the snake will become aggressive. Aggressive snakes are one thing, but the King Cobra is one of the deadliest snakes in the world.

While its venom is not the most potent, the amount that it delivers in a bite more than makes up for that. Two large fangs will inject about 7 milliliters into the bloodstream, which can kill a human being in 15 minutes. In fact, there’s enough venom in a single dose to kill 20 people.

The venom attacks the nervous system, paralyzing it in addition to the heart and lungs. Eventually, the victim goes into cardiac arrest. It’s possible to survive a King Cobra bite, but only if you have immediate access to the antivenom. Since that can’t be a guarantee, it’s best to avoid the chance of getting bitten in the first place.

The ability to legally possess a King Cobra is restricted in some states and flat-out prohibited in others. Before you have your heart set on inviting this creature into your home, which we don’t recommend, check the laws in your state to see if you need a special permit to own this particular snake or if it’s completely illegal to own. Keep in mind that crossing state lines to purchase a snake in a state where it’s permitted to own them and bringing it back to a state where owning it is forbidden is still illegal.

If we can keep other reptiles as pets, why is it morally wrong to keep a King Cobra? First, the life of the animal that you keep should always be respected. If you’re caught keeping a King Cobra in an area where it’s illegal to do so, the snake will likely be seized and euthanized. That’s hardly fair to the Cobra, which will have no say in the matter. You’re putting yourself at risk of prosecution and the Cobra at risk of death by owning it illegally.

What if you have a permit to own a King Cobra without breaking the law? You’re still putting yourself at risk of death should this snake ever bite you or someone else in your household. This risk extends to wildlife and neighborhood pets and children. Should your snake ever escape its enclosure, which can never be 100% escape-proof, it can also escape your house and be free on the street, creating panic in your neighborhood. The entire community may have to go into lockdown until the snake is found by law enforcement and captured.

Adding to the morality of this issue, the illegal pet trade has caused a huge decline in the King Cobra population. If you purchase one of these snakes, you could be buying one that was stolen from its natural habitat in the wild.

If you already have your permit ready to acquire a King Cobra, be sure that you understand what they need. A large, secure enclosure is a must. These snakes should be isolated. They will need basking bulbs that replicate sunlight. A King Cobra’s favorite food is other snakes. In the wild, they hunt other snakes and eat them, venomous or not. In captivity, you can get them used to eating rodents and other small mammals. The larger the meal, the longer the Cobra can go without eating. If the meal is very large, it could satisfy the Cobra for a month.

We don’t endorse owning a King Cobra as a pet. If you still want one, check your state and county laws to make sure it’s legal to own one. These snakes are extremely dangerous and can kill humans within 15 minutes. Should you decide to keep one as a pet, know the risks involved for yourself and your community, and always make sure you have antivenom on hand.

Do Geese Make Good Pets? What You Need to Know!

What Do Jumping Spiders Eat in the Wild and as Pets?