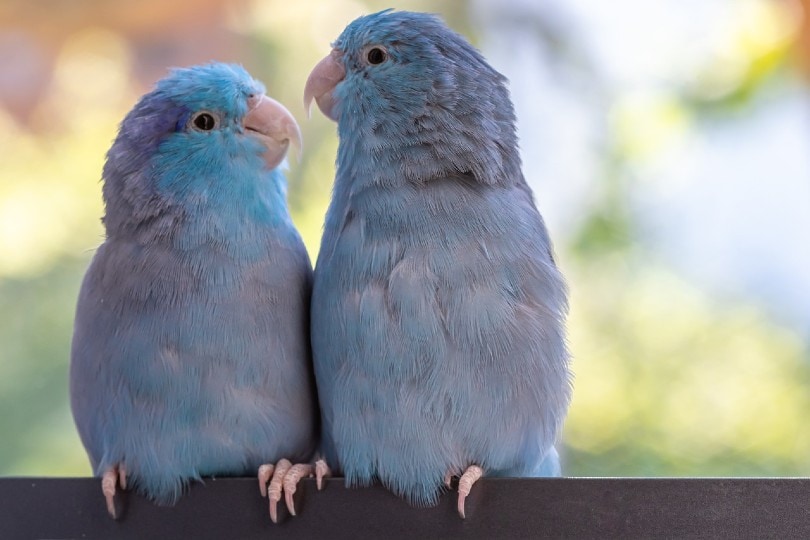 Almost all Parrotlet color mutations are based on only four colors: green (wild type), blue, grey, and turquoise. However, selective breeding has resulted in a massive variety of color and pattern combinations. Green is most commonly found in the wild too. In general, chicks will differ in color from adult birds and develop their colors as they age. After they have their first molt, their color will mostly remain the same throughout their lives, although it may dull slightly in some birds.

If you’re looking at bringing home a new Parrotlet, you’ll need to decide on the exact color that you want. Here are 12 available Parrotlet color mutations.

Albino Parrotlets have one of the rarest color mutations and are exceedingly difficult to sex. They are characterized by a complete lack of color in their plumage and always have red eyes. True albino birds occur randomly in nature and captivity and are difficult to replicate. Most albino Parrotlets on the market are not true albinos but are instead “blue” versions of the lutino variety. They occasionally have a blue sheen on their feathers when viewed in bright light.

Turquoise Parrotlets are somewhere between green and blue variations but are still considered a blue variety. It’s easy to tell a turquoise from a blue mutation because turquoise birds will have a green mask, while blue birds will only have blue masks. They are typically turquoise-blue all over their body, with a hint of green or blue in places.

The white mutation is not to be confused with albino birds, although they are often sold as such. White Parrotlets have an obvious powdery blue coloring in their plumage and are not completely white like albino varieties. The males also still have the obvious male markings on their heads and wings, albeit paler. Females are completely white with an icy blue tinge.

The American yellow is a green series mutation, with a lime green/yellow coloring that brightens after the first molt. They typically have a darker yellow facial mask and lighter, washed-out blue wing and tail markings. Some varieties are bright yellow in color with almost no green present, giving them an almost neon yellow appearance.

Blue Parrotlets are fairly common in the pet trade and can range from a vibrant, bright blue to deep, dark blues and lighter, more pastel shades of blue, almost slate-grey in appearance. They typically have lighter shades of blue on their heads and undersides, with darker wings and tails, and this is especially true in females.

The creamino is a creamy-white bird with touches of yellow and green in their plumage and red eyes. Their bodies are typically a very pale yellow color that gives a creamy white appearance, and they usually have darker yellows on their head and wings. These birds are difficult to reproduce and are thus one of the more expensive mutations to purchase.

The fallow mutation can occur with any color Parrotlet. However, it is most commonly found in green or yellow birds. The fallow mutation results in red eyes and gives the bird a washed-out, pastel coloration that is often described as “dusty,” with the bird appearing to have been lightly dusted with a darker color than the base.

Green is the most common Parrotlet coloring, often referred to as the “wild-type” variation. They can have various shades of green, from deep, dark green to lighter, yellow-tinged coloring. Parrotlets without any genetic mutations, known as “true greens,” are rare and difficult to find, and they need genetic testing to verify their genetics.

Grey Parrotlets are technically blue series birds, and most have a steel blue coloring that appears as grey. They often have a slight green or turquoise tinge to their plumage too, but with no obvious blues at all. Like blue varieties, their wings and tails are often darker grey in color, but they typically have lighter masks and undersides.

Also commonly referred to as pastel, marble Parrotlets have an “edging” of color on their primary feathers. Marbled varieties can occur in most colors of Parrotlets, commonly in turquoise, white, and blue birds. This edging of a darker shade of their base color gives the bird a beautiful, pastel-like appearance. Marbled birds are difficult to reproduce and difficult to sex, and the effect can appear in different consistencies. As such, well-marbled birds can go for up to $600!

Is my Parrotlet male or female?

With most Parrotlet colors, determining sex is fairly easy: Males will always have blue coloring on their rump, above their eyes, and on their wings, whereas females will always be a solid color. Of course, different mutations can often make sexing a little more tricky, and mutations like marbled, albino, or pied need more specific observations from experienced breeders. DNA testing is the only way to be 100% sure in these cases.

How much do Parrotlets cost?

On average, a standard green or blue Parrotlet can go for as little as $100 because they are fairly common. Of course, the more complicated or rare the mutation, the more that you can expect to pay. Fallow, pied, and marbled Parrotlets are among the most expensive mutations, beginning at $300 and going up to $600 for pristine varieties.

With selective breeding, there is no shortage of beautiful colors of Parrotlets, and the color combinations are growing every year. Even with all the astounding color possibilities, the simple green “wild-type” variation is, in our opinion, just as beautiful as any other color. No matter what color you choose, Parrotlets are gorgeous, loving pets nonetheless!

8 Rarest Pet Birds in the World (with Pictures)