Home » OYE BAGGU » Can Turtles See in the Dark? What You Need To Know!
OYE BAGGU

Can Turtles See in the Dark? What You Need To Know! 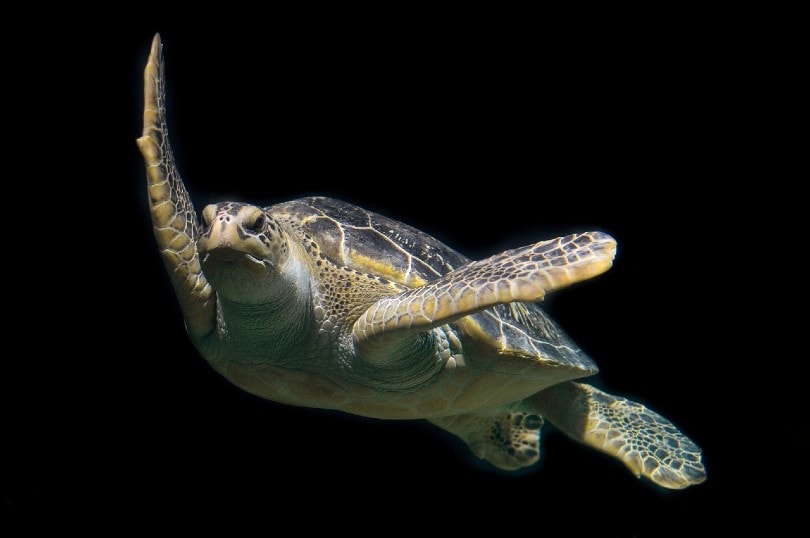 Many turtles see similarly to people. They don’t have night vision like a cat does. However, their eyes will adjust to the darkness, allowing them to see somewhat. It won’t be as clear as their daytime vision, however. This is similar to people. We can’t see in the dark, but most of us can make out vague shapes after our eyes have adjusted.

Therefore, the answer to this question largely depends on what you mean by “see in the dark.” If you mean clearly, then no. But if you mean if they can see anything at all, then the answer is yes.

You can’t expect turtles to navigate clearly in the dark, though, as they can’t see all that well. Different species will also have different sight capabilities. Some don’t see well, anyway, which makes their lack of vision at night less of a problem.

Species that rely more heavily on sight will have a more challenging time at night.

A turtle’s vision is a bit complicated. Here, we discuss the essential points to help you understand how their vision works.

Do Turtles Need a Light at Night?

No, it isn’t recommended that you provide a pet turtle with a light at night.

It’s true that they can’t see well in the dark. Many turtles will be unable to make out anything clearly, similarly to people. However, this doesn’t automatically mean that they need a light.

Imagine if your house’s lights were on all the time. You also don’t have access to the outside or any windows. You are just in a brightly lit basement. Not only would it be challenging for you to get to sleep, but you’d also have trouble understanding what time it was. Your understanding of night and day would get messed up.

On top of the short-term problems of sleep deprivation, long-term exposure to constant light could mess with your hormones. Without the slowly dimming light of dusk, your brain would have no idea when to make melatonin.

If we constantly provided our turtles with light, their lives would be similar. They would have no idea what time it was and have a hard time sleeping. They’d be able to see clearly, but that wouldn’t matter for a sleep-deprived animal.

Therefore, you should attempt to keep a pet turtle’s night/day cycle as regular as possible. Turn their light off every day and turn it back on in the morning at the same time.

What Do Turtles Do at Night?

They sleep, in most cases. Turtles will often find somewhere quiet and safe to sleep. In the wild, they may wedge themselves into tight places. Human-made structures may be used, as well as natural debris.

Giant turtles may not find a sleeping spot at all. Most have no predators that will attack at night, so they usually go to sleep wherever they are.

In captivity, a turtle’s behavior can vary. If you provide them with a sleeping space, they may use it. If you don’t, they’ll likely pick a random spot to sleep.

Most turtles are not active at night, which is precisely why they don’t need to see well in the dark. Like people, their sleeping cycle dictates that seeing at night is unnecessary for their survival, so that ability never evolved.

Why Do Turtles Sleep With Their Heads Out?

You may occasionally see a turtle sleeping with their head and other limbs out of their shell. This can occur both in captivity and in the wild, though people usually see this behavior in captivity more often. There are more opportunities to observe sleeping turtles, after all.

When a turtle leaves their limbs out to sleep, it usually isn’t anything to be concerned about. Typically, they are trying to warm up. There is no way for them to absorb any heat while inside their shell. Therefore, they may leave their limbs out.

Remember, turtles are cold-blooded, so they don’t create body heat. If the outside is warmer than the turtle, it makes sense for them to leave their limbs out.

In captivity, this is often a sign that the turtle’s enclosure isn’t warm enough. In these cases, we recommend increasing the overall temperature.

In the wild, this is usually a sign that the weather is colder than the turtle was expecting. However, unless it gets far too cold, this typically isn’t a problem.

Turtles don’t see in the dark, mainly because they don’t need to. They sleep at night, just like us. Therefore, there is no practical reason that they should see in the dark.

In captivity, a turtle should have a normal day/night cycle. You should avoid adding light at night. While they won’t be able to see well in the dark, they shouldn’t have to. The harm of the light disturbing their sleep far outnumbers the potential benefits of keeping it on.

Do Leopard Geckos Like to Be Held? All You Need To Know!

Can Hamsters Swim (and Do They Enjoy It?)