6 Scorpions Found in Texas (With Pictures) 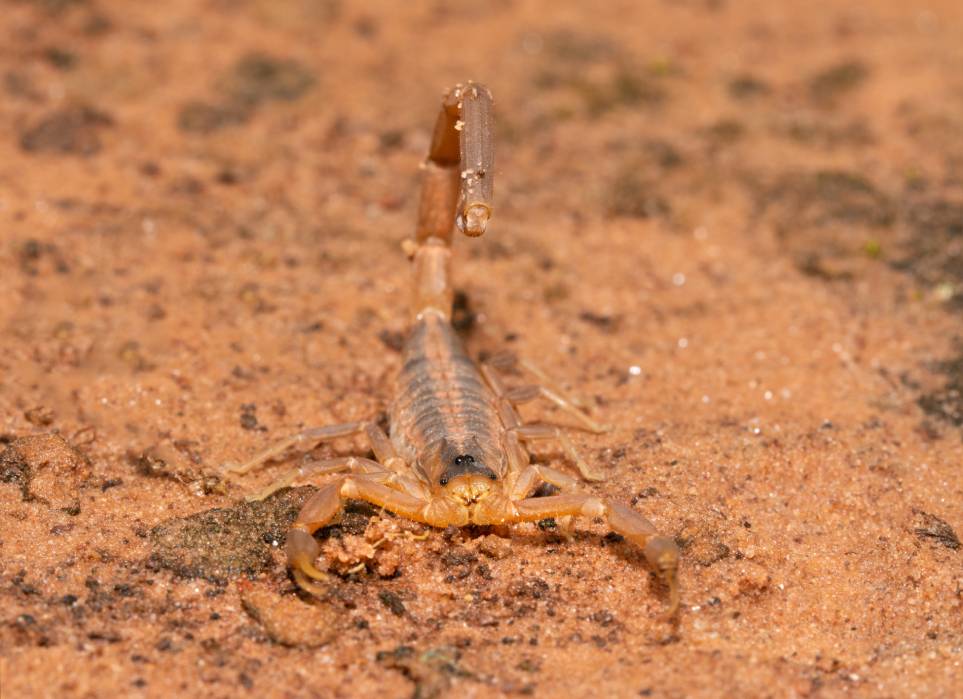 Texas, or the Lone Star State as it’s also called, is home to dozens of different animal species, including some that are very rare and found only in Texas. Of all the critters living in this southwestern state, none are more fascinating or frightening than the scorpion.

A real Texan knows he’d better check those cowboy boots he’s about to slip on to make sure there’s not one of these eight-legged arachnids inside that can deliver a nasty sting.

Fortunately, there are no poisonous Scorpions found in Texas that can affect the nervous system, cause paralysis, heart irregularities, or death. But the scorpions that do live in Texas can deliver a painful sting that can result in a mild or moderate reaction. We’ll list a few of the most common scorpions found in Texas so you’ll know what to look out for if you visit this big state.

The Striped Bark Scorpion is the most common scorpion in Texas and this species can be found throughout the state. This scorpion can sting you but the sting isn’t extremely dangerous as it only causes a moderate reaction in most people.

The Striped Bark Scorpion has a long slender body and two-tone brown coloring. This scorpion’s pincers, legs, and tail are pale yellow and its abdomen is dark brown. It has two long stripes along the sides of its back and the tip of the stinger is black.

Like other scorpions that are mostly nocturnal, the Striped Bark Scorpion stays hidden during the day so it can keep its body temperature regulated. This scorpion has a waxy cuticle covering its body to reduce the loss of water. The most fascinating thing about the Striped Bark Scorpion is that this waxy substance shines bright blue under a blacklight and nobody knows why!

This non-venomous scorpion is a wandering hunter that can be found anywhere outdoors. It climbs trees, hides in woodpiles, and crawls under rocks and fallen trees looking for prey like crickets, worms, spiders, and other small invertebrates. You can even find them indoors around sources of water like sinks and tubs.

As you may have guessed by the name, the Texas Cave Scorpion can be found in and around caves in central Texas. These cave-dwelling scorpions are dark in color and have thicker pincers than the more common Striped Bark Scorpion.

While these scorpions are usually found in cave areas, they can be found elsewhere in dark, covered areas like in woodpiles and underneath rocks. As a venomous scorpion, the Texas Cave Scorpion can deliver a nasty sting but it’s not poisonous enough to kill a human. A sting by this scorpion results in a red and swollen sore area that typically doesn’t produce any serious symptoms.

This scorpion eats mainly crickets and the occasional centipede and other creepy crawlers that reside in and around caves. Like most scorpions, the Texas Cave Scorpion immobilizes its prey by injecting them with venom while holding them with its pincers.

The oddly-named Straight-Faced Solifugid Scorpion is found primarily in the desert regions of Texas. These agile scorpions that are about 2 inches long are very fast which is why they’re also called Wind Scorpions as they can move as swiftly as the wind.

Even though this is a nonvenomous scorpion, it can deliver a painful bite using its strong jaws. While there are ongoing disputes concerning whether these creatures are scorpions or spiders, they are classified as being part of the scorpion family. These are aggressive scorpions that are harmless unless you try to pick them up, then they’ll bite you.Due to this scorpion’s spider-like looks and fast movements, a Straight-Faced Solifugids can easily startle and frighten you if you come across one.

The Florida Bark Scorpion is a venomous scorpion that’s found primarily in residential areas in central Texas. It’s common for homeowners to be startled by these scorpions that can show up in woodpiles, under tree bark, and beneath stones.  These scorpions can even be found living in the walls of homes and under rubbish piles in yards.

While this is a venomous scorpion, it’s not considered a dangerous or deadly species but it can deliver a nasty sting that can be rather painful.  This scorpion spends the daytime hours under logs or loose pieces of tree bark. They can also hide under boards and other types of debris and often find their way into recently built homes in Texas.

The Lindo Scorpion or the Digging Scorpion as it’s also called lives in the desert areas of Western Texas. This scorpion can be found burrowed in the desert sand.  This is a slow-growing but long-lived creature that can take up to 8 years to reach full maturity. This is not a commonly seen scorpion in Texas mainly because it’s elusive and digs itself into the sand. The Lindo Scorpion eats a variety of invertebrates including beetles, crickets, and other insects. This is a scorpion that can go several days without food but when it is hungry, it has a voracious appetite.

Like other scorpions native to Texas, the Lindo Scorpion is not deadly to humans but it can and will bite if threatened or provoked. While a  bite from one of these scorpions can be painful but not serious.

The Lesser Stripetail Scorpion is a burrowing species that lives in a variety of habitats. These aggressive scorpions can be found in the desert, in sandy wooded areas, grasslands, and even rocky slopes in mountains to about 7,000 feet.

A Lesser Stripetail Scorpion spends most of its time undercover hiding among rocks and underground debris hunting for prey that consists of a variety of insects like beetles, grubs, small worms and other small invertebrates.

You can experience a lot of pain if you get stung by a Lesser Stripetail Scorpion. The sensitivity and pain from this creature’s sting can last for 30 minutes with some swelling and redness present. However, a Lesser Stripetail Scorpion sting is not lethal but rather uncomfortable so if you run across one of these scorpions in the wild, leave it be! This scorpion flicks its tail when faced with danger and it will stand its ground if something is threatening it.

The scorpions living in Texas thrive in that state’s warm and dry climate. These are strange-looking arachnids with hard shells covering their bodies, lobster-like claws, and tails that curl up over their backs.

Scorpions play an important role in their ecosystem, keeping the invertebrate species in check while providing food for a variety of animals and birds like coyotes, shrews, owls, and bats. You can keep any of the species named above as a pet as long as you provide your scorpion with the right habitat and food.

While there are no poisonous scorpions found in Texas that can cause death, being stung by one of these arachnids can cause pain, redness, and swelling. Applying an ice pack to the area and taking over-the-counter pain medication is typically all it takes to recover from a scorpion sting.

5 Salamanders Found in Ohio (With Pictures)