Scorpions Found in Oklahoma (With Pictures) 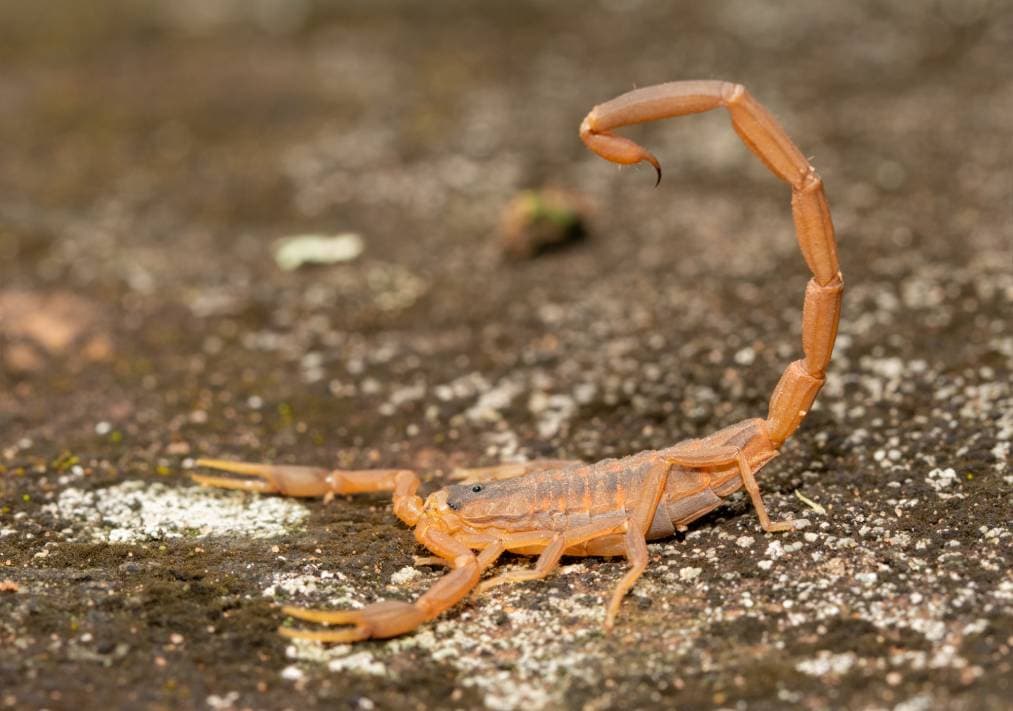 Scorpions are indistinguishable predatory arachnids with large pincers and the famous, forward curved tail with a venomous duct and stinger on the tip. Scorpions belong to the class of joint-legged invertebrae known as arachnids.

Located in the South Central region of the United States, bordered by the state of Texas on the south and west, Kansas to the north, and Missouri on the east, Oklahoma has only one native species of scorpion within its boundaries. We’ll take a closer look into the only scorpion in the Sooner State.

Striped Bark scorpions are light brown to tan in color with two lengthwise dark stripes down their back and a distinguishing dark triangle at the top of the head. As youngsters, they tend to be more of a yellowish-brown color.

This species is small, reaching no more than 1 to 3 inches in length fully grown. The tail is usually longer in males than in females.

They have a pair of eyes in the middle of the back and additional pairs of eyes along the front edge of the body. Though they have many eyes, their vision is extremely poor. Their bodies are covered with a waxy cuticle which also helps reduce water loss.

Their pincers come complete with tiny sensitive hairs that assist with detecting motion. There are comb-like structures called pectines on their undersides, which are unique to scorpions. The pectines are sensitive to touch,  ground vibrations, and sound.

Striped Bark Scorpions mate in the fall, spring, and early summer. Rather than being hatched from eggs, scorpions are born alive. Gestation for a female scorpion is estimated at approximately 8 months.

Litters of Striped Bark Scorpions tend to fall in the range of 12 to 45 young. After birth, the young will climb onto the mother’s back and soon molt. After the first molt, they will then leave their mother and move on to their individual lives.

Young scorpions will molt an average of six times before they reach full maturity. The Striped Bark Scorpion has an average lifespan of 3 to 5 years and will produce several broods as an adult.

As a nocturnal species, they hide during the day in burrows, under rocks, bark, and vegetation. They are commonly found in sheds, barns, and even houses.

At night, this species will emerge from its daytime hiding place in search of prey. Being nocturnal assists them in regulating their body temperature. Scorpions are capable of reducing their metabolic rates to very low levels.

The Striped Bark Scorpion can be located in several states throughout the United States and northern Mexico. Due to their widespread distribution, they are found in a variety of habitats, including the desert, deciduous and coniferous forests, and temperate grasslands.

What Other States is the Striped Barked Scorpion Found in?

Oklahoma is not the only state the Striped Barked Scorpion is found. Their natural geographic distribution is formed by several South-Central US states and northern Mexico.

Other States that you can Found Striped Barked Scorpion

As nocturnal predators, Striped Bark Scorpions prefer soft-bodied prey such as spiders, cockroaches, ants, crickets, beetles, centipedes, and flies. They will grab prey with their pincers and if needed, will use their stinger to inject them with venom to subdue it.

The Striped Bark scorpions are the only native scorpion to Oklahoma and the most widespread scorpion in Texas. They have painful stings that produce localized swelling, discoloration, itching, and numbness that can persist from a few hours to several days.

Reaction to Stripe Barked Scorpions venom may vary from individual to individual.  While the effects are very painful, the sting is seldom fatal. Some people may have an allergic reaction to the venom and will require medical attention.

Deaths attributed to this species are not well substantiated and would likely be due to anaphylaxis caused by an allergic reaction. They only sting humans when they feel threatened, it’s best to keep an eye on your surroundings and use caution if you must handle one.

Exterminators in Oklahoma will use insecticides to kill scorpions when they are found in human dwellings.

Striped Barked scorpions are the only species of scorpion found in the state of Oklahoma. Generally viewed as pests due to their love of dwelling in human structures, they are a common species on the list for local exterminators.

They are not typically lethal to humans but their sting can cause severe pain and swelling that can last for days. If in Oklahoma, it’s best to be wary of looking under rocks, bark, and other vegetation. Don’t be surprised if you run into one in the house either!

Do Snakes Give Birth Through Their Mouth?