Home » OYE BAGGU » What Do African Bullfrogs Eat in The Wild and As Pets?
OYE BAGGU

What Do African Bullfrogs Eat in The Wild and As Pets? 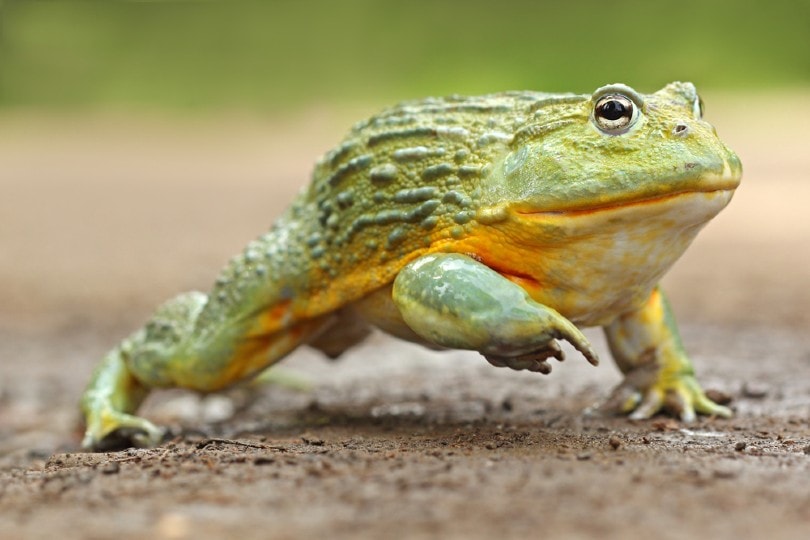 African Bullfrogs are one of the most sought-after species in the pet trade. They are among the largest species of frogs and often live for more than 20 years! They are native to Africa, and they can be found in ponds and streams. African bullfrogs are generally brown or green, but some have been observed pink with yellow stripes.

You can recognize the flat head of an African bullfrog with a wide mouth containing powerful jaws and small eyes on top of its head. The legs of the African bullfrog are short but muscular. They’re adapted for moving around on land as well as swimming. The back feet have toes that are webbed with an outer layer of tough skin for protection from predators.

As far as frogs go, these guys have everything they need to succeed as hunters! This blog post will explore what African bullfrogs eat in the wild and as pets.

What do African Bullfrogs Eat in the Wild?

To understand what African bullfrogs eat in the wild, we must take a look at their environment. These frogs live in ponds and streams, so they hunt for food in these locations. African bullfrogs are voracious carnivores, meaning they eat other animals as their primary source of nutrients.

While searching the bottom of puddles to find prey, African bullfrogs will consume anything that moves too slow! The African bullfrogs’ diet can vary from region to region and is influenced by the availability of food sources in each area.

For example, a frog living near an open water source will have a broader range of prey than one that lives on land with limited aquatic access. Frogs living close to humans are more likely to feed on domestic animals. Fish seem to be a common food item, although frogs cannot digest bones since fish scales could cause indigestion.

African bullfrogs have excellent eyesight for a frog – it is believed that these frogs can see as well as rabbits at night. They are also able to detect changes in light intensity with the help of cells below their eyes. This allows African bullfrogs to hunt at night, as many of their prey are nocturnal animals! African bullfrogs may also eat small invertebrates, including worms, snails, tadpoles, and even other frogs.

Finally, the African bullfrog is an opportunistic animal and will eat anything that it can come across, including potentially dangerous prey like snakes or poisonous insects. It has been said that the frogs have a fearsome reputation among locals in these regions because they are aggressive hunters who consume many creatures bigger than themselves—including venomous species.

What do African Bullfrogs Eat in Captivity?

African bullfrogs are also popular pets both in Africa and the United States. In captivity, these frogs are given a diet as similar to their natural environment as possible. You should feed African bullfrogs at least once a day to maintain good health.

The diet of an African bullfrog can consist mainly of fish and worms – because these animals eat so much food each day, owners of African bullfrogs must have feeders on hand at all times. However, frogs can also be fed live crickets and other types of worms/invertebrates – you may even notice them eating small amphibians or animals that are much smaller than themselves!

You can feed African bullfrogs small live fish or worms that have been dipped into a flaxseed oil solution. This process is called gut-loading. It ensures that the frogs are receiving enough nutrients and vitamins in their diet to stay healthy! In captivity, the frog’s diet must include essential fatty acids.

African bullfrogs also need access to calcium to keep their bones strong. Insects such as beetles and worms are a good source of calcium. For this reason, African pet bullfrogs must be fed an adequate number of insects in their diet, as they can get the required calcium from these sources.

It should be noted that African bullfrogs prefer live food! The most common ways of feeding your frogs live crickets is by using a pet cricket care kit or building your own cricket trap.

Scientists recommend feeding African bullfrogs at least once per day and up to three times per week if they are kept in small environments like aquariums. In larger enclosures, the frogs can be fed every other day, depending on their activity level.

What should you feed them if they refuse to eat?

A frog will usually stop eating for a while or even permanently if it feels stressed, sick, or not healthy enough. If this happens and the frogs refuse to take food from their dish, try misting some live insects with water before offering them in their container, so they have a better chance of catching them.

What should you do if they are overeating?

Frogs can eat many insects in one sitting, so it is crucial to monitor the amount your frog is consuming and stop feeding the frogs as soon as their stomach starts looking bloated or distended. Providing too many insects will lead to gas build-up, which can lead to bloating and constipation.

How and Where Does an African Bullfrog Hunt?

As mentioned earlier, these frogs are nocturnal hunters who spend most of the day sitting quietly, waiting for their next meal to enter into range. Once a frog has detected an animal within its catching radius, it suddenly jumps up and grabs hold of the prey with its strong forelegs.

African bullfrogs are known as ambush hunters because they wait quietly until their prey draws near – at this point, many frogs send out secretions from their skin that will attract any small aquatic animals nearby. These secretions are made up of a combination of odors, which are released by glands in the frog’s skin.

African bullfrogs generally do not chase their prey; instead, they use powerful forelegs to catch and grasp it with ease. The frog’s powerful forelegs have been proven to be very strong, capable of lifting up to 15 percent of the animal’s own body mass—including a meal! In the wild, they are also known to catch prey much larger than themselves!

The African bullfrog has no teeth; instead, it uses the rough surface on its tongue as a way to catch and hold onto its prey, which it then swallows whole.

In captivity, you may notice African bullfrogs feeding on live crickets or mealworms that have been coated in a vitamin supplement called Nutrachroma. The supplement is simply added to the water of the frogs’ food and coats their bodies with artificial vitamins.

African bullfrogs are known to be cannibalistic, so you need to watch out for any signs of this behavior in your pet frogs. Female African bullfrogs have been proven to be especially aggressive toward their male counterparts.

African bullfrogs display cannibalism by eating the skin and eyes of their smaller counterparts; however, they will sometimes also eat the entire frog. Cannibalism is most likely to be displayed when food is scarce, as it has been shown that they will eat their own young to ensure that at least one of the two frogs survives in times of starvation.

Males may also try to eat any tadpoles that he sees, but the females will try to stop him.

African bullfrogs are voracious hunters who spend most of their lives sitting quietly on the banks of rivers or ponds, waiting for prey to swim by. They are nocturnal animals that are considered to be one of the world’s largest frogs.

Because they eat so many insects in the wild and can catch prey that is much larger than themselves, it is crucial to provide them with a high-protein diet when you keep them as pets.

African Bullfrogs may not be welcome guests in your pool, but they make great pets! If you add live crickets to your pet bullfrog’s tank—and supervise her closely—she will have all she needs to stay healthy and happy for a long time.

If you decide that an African Bullfrog isn’t right for you, feel free to check out our other pet articles.

Frogs in The Cold: What Do They Do and Where Do They Go?