9 Turtles Found in Maine (With Pictures) 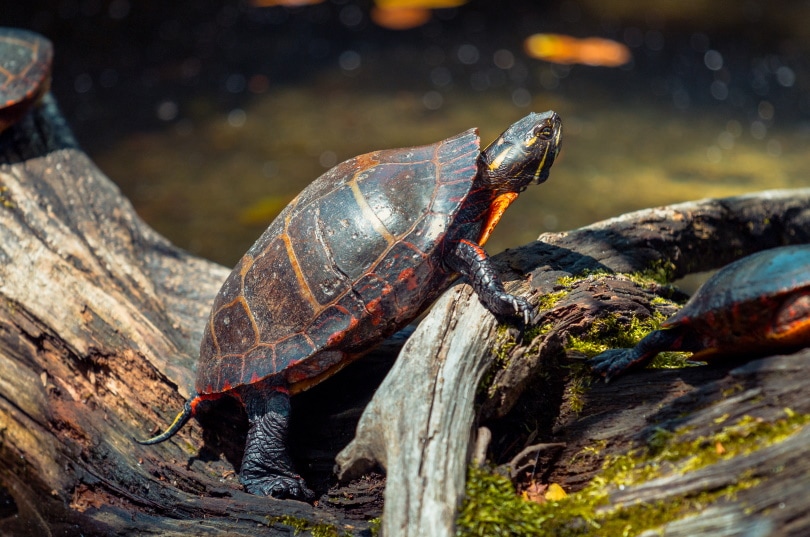 Turtles can be found all around the globe, including in the state of Maine. In Maine, there are seven native land turtles, as well as two types of sea turtles that could be found in the waters around the state.

Although it can be easy to find some turtle varieties, such as Painted Turtles and Snapping Turtles, others are threatened. For example, the Blandings Turtle, Eastern Box Turtle, Wood Turtle, and Spotted Turtle are all endangered.

To learn more about the nine native turtles to Maine, read on.

The easiest place to find turtles is on land. Even though turtles are often found in ponds and rivers, turtles cannot breathe underwater. As a result, the majority of turtle species can be found right in the Maine-land (pun intended).

Painted Turtles are some of the cutest and friendliest turtles native to Maine. In fact, there are actually two different types of Painted Turtles in Maine, including the Eastern Painted and the Midland Painted. Both varieties are popular pets.

The Painted Turtle is named because of its unique colorations. They have dark shells with yellow stripes. They can also have orange, red, and other colors for the patterning. In addition to the strong coloration, you can identify Midland Painted Turtles by the shadow-like patch on their plastron.

Much like Painted Turtles, Spotted Turtles are really stunning, but they don’t make the best pets because they are very sensitive. This small species has a black, smooth shell with bright yellow dots. Their plastrons are also yellow, but they have black patches on both sides.

You can easily find Spotted Turtles in the shallow waters of marshes and ponds. These turtles love to bask. So, look for them on logs or the land right beside the water. Unfortunately, local water pollution is threatening these creatures.

The Common Musk Turtle really is a unique creature. It is nicknamed the “Stinkpot” because the animal smells very strongly due to scents released from their musk glands. This harsh smell is often used to protect themselves from predators.

Common Musk Turtles can be found all throughout Maine. You will most likely find them in marshy or boggy habitats so that they can hunt for all of their favorite treats. They have dark unmarked shells, and their heads are also dark, but they have yellow lines along their face.

The Common Snapping Turtle is very large, and it is actually the largest amphibian turtle in Maine. Common Snappers are aggressive and are often found in large bodies of water. As a result of  their aggressive behaviors, they are not recommended as pets.

You can identify Common Snappers by looking at their distinctive beaks, which are hooked. These turtles have dark brown and green shells. Additionally, Common Snapping Turtles are known to have really strong claws and longtails.

The Blandings Turtle, which is named after William Blanding, is it endangered variety in Maine. These turtles have dark shells with yellow spots. Additionally, their plastrons are yellow, but they have black patches as well.

What really makes the Blandings Turtle stand out amongst the others is that it is called “the turtle that smiles.” That’s because the natural slope of their mouth almost makes it appear as though they are smiling. Still, these turtles don’t have much to smile about since they are endangered.

The Eastern Box Turtle is another species that is native to Maine and threatened. These turtles have dark brown domed shells with distinct yellow and orange spots and markings. Their plastrons are dark brown.

Eastern Box Turtles are known for their unique ability to regenerate their shells. The regeneration ability is partially why their shells are so domed. You can find this threatened species in woodland, marshy, and grassland areas, but they are most commonly found within easy access to streams and ponds.

Wood Turtles are highly intelligent, but they are endangered because of local water pollution and other threats to their natural homes in woodlands and ponds. These turtles are very active and rock themselves to create vibrations so as to lure worms out of the ground.

In addition to finding turtles in freshwater and on land, there are two types of sea turtles that frequent the Maine waters. Of course, sea turtles are not native to Maine specifically, but you can find them during the right season.

Leatherback Sea Turtles are protected, especially their nest, which you can find on sandy beaches. Often, government agencies will mark these nests so that people don’t accidentally sit on them or break the delicate eggs.

The Kemp’s Ridley Sea Turtle is lesser known than the Leatherback. These turtles have slightly hooked beaks and triangular shaped heads. Their shells are round and can be various shades of green or gray. Their plastrons and undersides are yellow or cream.

Unfortunately, Kemp’s Ridley Sea Turtle are critically endangered. This is largely because of water pollution and other issues relating to their environment.

However, some of the more common turtles found in Maine make great pets, such as a Painted Turtle. Still, always be gentle and considerate when dealing with all turtles, even if they are found in abundance.