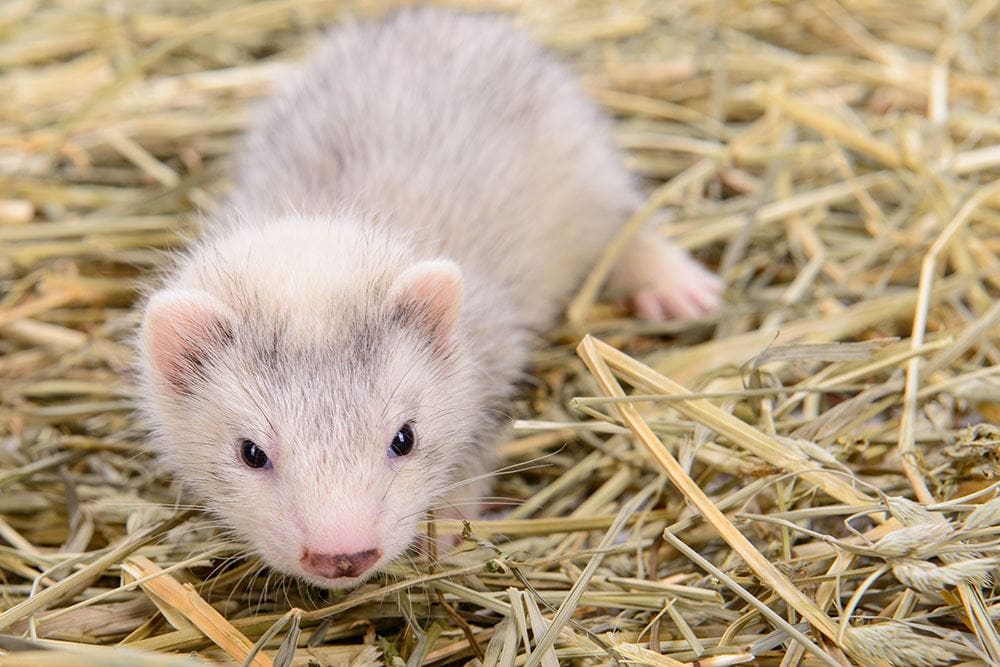 You may ask yourself, “What could be more cuddly than a ferret?” Believe it or not, we have an answer to that question. Did you know that there’s such a thing as a panda ferret? If you want to learn more about this absolute pinnacle of cuteness, the brief guide will answer all your questions!

What Is a Panda Ferret?

A panda ferret is a standard ferret, albeit with distinctive markings.

It’s important to understand that a panda ferret isn’t a different breed of ferret — they’re just a regular ferret, but with a distinctive coat coloring. They’re exactly the same in all other respects, although panda ferrets are more likely to suffer from certain health issues than their non-panda counterparts.

Panda ferrets have contrasting fur on their heads and bodies, with darker hues around their hips and shoulders, mitts on their feet, and white tips on the tails. Most adorably, though, they have colored circles around their eyes, although they don’t have a full mask like real pandas do.

How Rare Are Panda Ferrets?

It’s hard to tell just how rare panda ferrets are. They aren’t considered truly rare, like cinnamon ferrets, but they’re certainly not the most common pattern either.

The bottom line is that if you’re looking to buy a panda ferret, you should expect to pay a little extra for one, though not as much as you’d pay for a cinnamon ferret.

While it may be harder to track down a panda ferret than a sable one, it’s not impossible. But you may not want to do so.

There’s More to Life Than Being Adorable

While panda ferrets are undeniably cute, being deaf and possibly suffering from cranial deformities is a high price to pay for attractiveness. We’re not discouraging you from owning one, but you should know what you’re getting yourself into before you bring one home.

Quincy has been around mutts his entire life and has been writing about them for the past nine years and now consists of sharing a house with three spoiled pups who couldn’t hold down a job to save their lives. Quincy never intended to be a cat person. When his wife brought home a kitten one day, he told her she had one week to find it a new home. That week turned into 10 years (his wife moves very slowly), and that kitten turned into three (they got two more, the kitten didn’t self-replicate). After a decade of sharing his home with the dogs and three cats, one horrifying realization finally set in: oh God, he’s a cat person now too, isn’t he???

How Intelligent Are Ferrets? Everything You Didn't Know!