10 Spiders Found in Illinois (With Pictures) 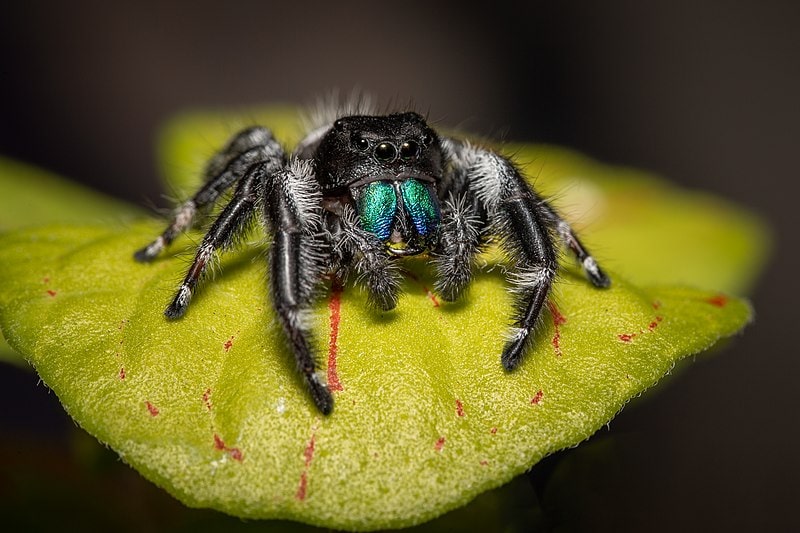 With over 500 species of spiders making their homes in Illinois, it can be hard to determine which one you’re looking at if they happen to cross your path. Even though there are so many different spiders, only a few species are seen regularly. Our list includes the spiders most commonly noticed in the Prairie State.

Many spiders look alike. They have similar markings and characteristics. These are the spiders that you’re most likely to come across in your backyard or home. If bitten, the bite area will likely be swollen, itchy, or slightly painful, but not dangerous to you. These spiders are not venomous to humans.

The Wolf Spider is one of the most common spiders not only in Illinois but also around the world! Illinois is home to 47 species of Wolf Spiders. These spiders don’t spin webs. They hunt and pounce on their prey, which usually consists of beetles, cockroaches, and crickets. They live under rocks, logs, and plants and like to make their way into humid basements and garages to hunt for food. They can appear intimidating due to their size and dark brown hairy bodies. Sometimes, they have markings of red and tan to help them blend in with their surroundings. They have good eyesight with three rows of eyes: three in the top row, two large eyes in the middle row, and three in the bottom row. Owls and other birds are predators of the Wolf Spider.

This tiny friend is black with white markings on the body and legs. They’re covered in hair and known for their jump! The Bold Jumping Spider is small, but they can jump quickly and cover 10–50 times their body length. You can find this spider in forests, grasslands, your backyard, and your home. They eat small insects, like boll weevils, and are often eaten by birds, spiders, and wasps. These spiders also don’t make webs to catch their food, preferring to hunt actively. They’re skilled hunters, catching and eating prey that is sometimes four times their body size.

The Orb-Weaver is most commonly seen around autumn, when they’re fully grown. They’re typically brown or gray, with two light stripes down their backs. They have rounded abdomens and hairy legs. If you look up around light poles or in bushes and trees, you can often see the massive webs that these creatures create. The Weaver themselves will usually be resting in the center of the web, waiting until it’s time to eat again. Some species will eat their web every morning and build a new one at night. They eat flies, moths, and mosquitoes, so many people enjoy having them around as a natural pest control. Birds pose the biggest threat to these spiders.

You’ll probably recognize the Cellar Spider by their more well-known name, “Daddy Long Legs.” They can be found under objects, like logs and rocks, and prefer moist environments like cellars. You may see these spiders around basement windows too. They are usually light tan or brown and have oval-shaped bodies, eight eyes, and eight long legs. They don’t spin webs, but rather catch their prey themselves. They eat aphids, caterpillars, and earthworms, but they also enjoy feasting on decaying plant matter or vegetation. Birds and frogs are the Cellar Spider’s predators.

The Black and Yellow Garden Spider will build a web in fairly open areas, like fences, shrubs, open fields, and eaves of houses. They like to eat flying insects, including those considered pests. Whatever gets trapped in the web becomes their meal. They’ve even been known to eat cicadas! For that reason, they’re usually welcomed by people if they’re spotted on the property. Birds, lizards, and wasps are known to prey on this spider. You can identify this friend by the symmetrical yellow patches down a black body and eight black legs with yellow spots.

The Common House Spider is commonly seen in or around houses. They build webs near or in homes and use these webs to trap their diet of ants, wasps, and mosquitoes. They vary in color from light tan to black. The females have a rounded abdomen, while the males have a slightly elongated one. They have patterns of lighter colors down their backs. This spider will curl up and play dead if they feel threatened. They’re usually eaten by other spiders.

The Woodlouse Hunter Spider is often found under boards, bricks, and flowerpots. They’re in these spots searching for pill bugs, their favorite food. They will also eat other small insects. They have six eyes, are reddish-brown or orange in color, and have a shiny yellow or gray abdomen. Earwigs and silverfish prey on this spider. Woodlouse Hunter Spiders don’t spin webs and instead, actively hunt pill bugs (or woodlice).

The White-Banded Crab Spider has white bands on their faces near their eyes, giving them their name. The female spider has a pale yellow or white body with brown, black, or red markings. Her colors will change throughout her life as she ages. The male remains the same color. His abdomen is a golden yellow. His front legs are dark brown, and his hind legs are blue or green. His body is yellow, red, or green. They primarily live in flowers to wait for their prey that they hunt themselves, without building webs to aid them. They’re known to eat butterflies and honeybees. Birds, lizards, and wasps are their natural predators. While waiting in flowers for food to come by, the White-Banded Crab Spider can change their color from white to yellow to better hide. Both males and females can do this, but the females are better at it.

There are two species of spiders in Illinois that are dangerous to humans. The Brown Recluse and Black Widow spiders should be avoided. Read on to find out more about them.

The Brown Recluse Spider is a brown or sandy-colored spider covered in fine hairs all over their body, giving them an appearance of velvet. They have six eyes. There is a dark brown spot on the top of the body in the shape of a violin. They’re known to eat insects, such as flies, cockroaches, and moths, but in some cases, they also prove to be cannibalistic by eating each other. Wolf Spiders, crickets, and praying mantises eat the Brown Recluse. You can find them anywhere that it’s dark and dry. Garages, storage areas, cabinets, and basements are favorite spots. They’ll also settle in old wood piles, sheds, and even shoes. This spider is venomous and will poison you if you’re bitten. While a Brown Recluse bite is rarely fatal, it’s important to get medical attention immediately if you’ve been bitten (or think that you’ve been bitten) by this spider.

The Northern Black Widow Spider is found in Illinois in fallen branches, hollow tree stumps, and rock piles. They’ve also been known to make their home in garages and basements. Anywhere they can hide in the dark makes them happy. Female Widows have a shiny black segmented body with an orange hourglass shape on their abdomens. Males are gray with red spots. They enjoy eating flies, mosquitoes, caterpillars, and other spiders. Birds and small mammals eat Black Widows. If you’re bitten by a Black Widow, they release a venom that affects the nervous system. Some people have a severe reaction to the venom. It can cause painful burning at the site, while more serious symptoms include difficulty breathing and weakness in the legs. Like the Brown Recluse, these bites are rarely fatal, but it’s important to seek medical attention after a bite.

Most spiders are happy to be left alone to their own devices. They don’t want to interact with or be near humans. They truly are more afraid of us than we are of them. They’d prefer to retreat from danger and hide if they feel threatened. They are aggressive only when they feel that they must be, and they tend to bite as a last resort. Spiders are a valuable part of our ecosystem and serve as natural pest control, eating undesirable critters. While it’s always best to steer clear of venomous spiders, if one does happen to bite you, immediately seek medical attention.

12 Turtles Found in Ohio (With Pictures)

What Do King Cobras Eat in the Wild & in Captivity?