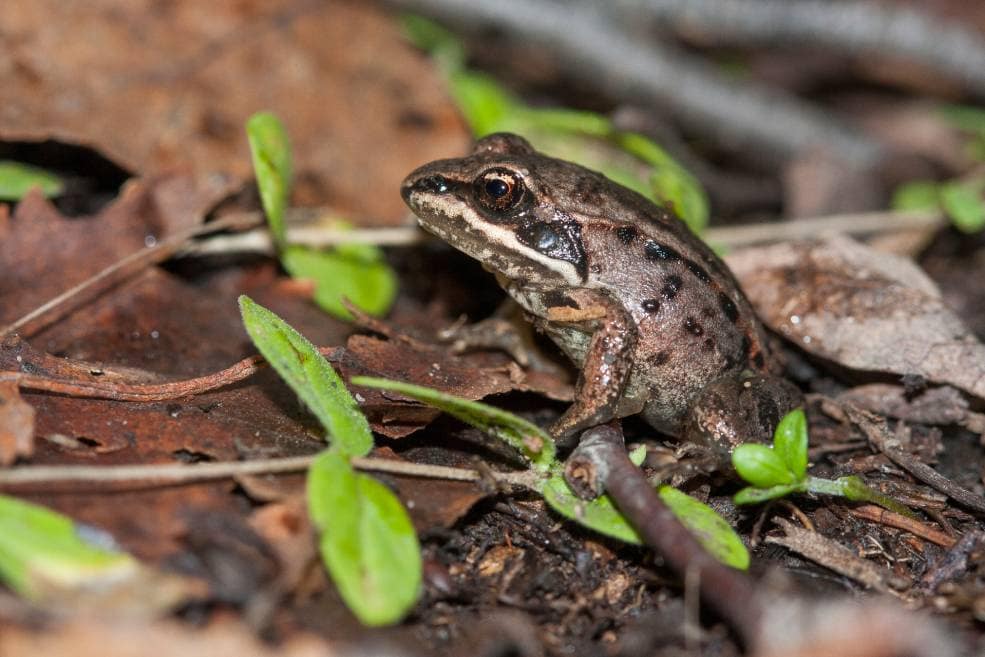 There are more than 6,000 species of frogs in the world. Michigan is home to 12 species that play a crucial role in the state’s ecosystem. These cold-blooded animals belong to class Amphibia and order Anura, and include several toads.

Quick fact: Did you know that all toads are frogs, but not all frogs are toads? It’s true! Toads are a sub-species of frog and belong to the same class.

Ready to learn about the 12 species of frog in Michigan? Read on.

The Wood Frog lives in moist woodlands like a coniferous, deciduous, and mixed forest. However, it can also survive in cold and freezing regions. It’s one of the most common poison frogs in Michigan

Its body cells contain glucose that protects it against freezing. This frog can survive even when a third of its body fluids are frozen.

Wood Frogs are diurnal and eat a variety of insects and small invertebrates. They, however, have many predators such as larger frogs, snakes, raccoons, snakes, and skunks. To survive, they have developed anti-predator mechanisms.

First, they can camouflage to hide from predators. In addition, their poison glands also repel predators. And when captured, they emit a sharp, piercing cry that startles the predator, prompting its release.

The males produce high-pitched trills in the breeding period that pet owners can find annoying. The sound resembles that of a thumbnail running along a plastic comb’s teeth. The choruses are much louder during the day but can extend to the night.

These amphibians live in low shrubbery, thick herbaceous vegetation, and open damp regions. They breed in shallow and temporary waters and rarely leave their habitat.

The midland chorus frog feeds on spiders, flies, moths, mites, and ants. Their tadpoles, however, are herbivorous and mainly feed on algae.

But these frogs are food to herons, raccoons, snakes, and larger frogs. Their young tadpoles and metamorphs are prey to salamander larvae, fish, turtles, crayfish, and aquatic insects.

A Fowler’s Toad has various habitats, including flood plains, river valleys, wooded areas, marshlands, and near water bodies. It hides during the day under rocks or burrows in the soil.

This toad breeds in shallow waters. Breeding starts with toad calls from March to June, where one female can lay more than 5,000 eggs in water.

For its meals, the toad snaps insects and other invertebrates using its tongue. It, however, is food for birds, snakes, and small mammals and relies on camouflage as a defense.

The Northern Spring Peeper’s habitat is temporary wetlands, marshy woods, and non-wooded lowlands close to swamps and ponds. They can survive cold conditions since their blood has a natural antifreeze.

It is important to note that these frogs can get above the ground. But when this happens, they do not exceed a height of three feet.

Although this species sounds like a Midland Chorus Frog, the peeper has a dark X-shape on its back. Additionally, it has a whitish belly and an olive or grayish-brown color.

This is one of the most common small frogs in Michigan and it eats ants, flies, and beetles but is preyed on by owls, salamanders, snakes, and large spiders.

The toad is most active from April to November. It spends the day under logs or shallow burrows during these active months then emerges to feed at night. It then spends the rest of the inactive months in deep hibernation burrows.

This warty skin toad is one of the most invasive frogs in Michigan and can eat up to 1,000 insects in a day. However, it is prey to snakes and birds. To fight them off, it secretes a poisonous milky fluid from the glands in the wart-looking spots.

The poison gives off a nasty taste and is harmful to predators. Luckily, this fluid is not harmful to humans, but it is advisable to wash your hands after you’ve touched them.

It can also inflate its body to make it difficult for the prey to swallow. In addition, it urinates on itself to taste bad.

The American Toad prefers living in ponds as it is a clumsy hopper. This is why you’ll find them in roadside ditches, agricultural ponds, and golf course ponds.

The Northern Leopard Frog lives in well-covered grasslands, forests, or near ponds and marshes. They can eat anything that their mouth can hold, like beetles, worms, tiny frogs, small birds, and garter snakes. They wait for prey to get within range, then leap and snatch them using their long, sticky tongue.

These frogs are prey to numerous species too. Since they do not excrete toxic skin secretions, they are preferred by raccoons, birds, snakes, larger frogs, foxes, and humans.

These frogs are active from March to June. Males produce snore-like rumbling calls to seduce females. After mating, the females can lay up to 6,500 eggs.

Michigan is home to two types of tree frogs; the Eastern Gray Tree Frog and the Cope Gray Tree Frog. You may have difficulty differentiating the two as they can change color and have similar habitats and behavior. However, you can use their trill to tell the difference.

The Eastern Gray Tree Frog has a slower trill of 17 to 25 notes a second since it features double the usual number of chromosomes.

This amphibian lives in wooded areas along rivers and creeks. You can also find them in trees and shrubs that grow or overhang in water.

They also love moist areas like rotted logs and hollow trees in summer. They then hibernate in winter under leaves and tree roots.

The Eastern Gray Frogs are nocturnal and primarily hunt prey during the night. In addition, these frogs are active from April to July.

Unlike the Eastern Gray Tree Frog, the Cope Gray Tree Frog has the usual number of chromosomes in invertebrates. It also has a higher trill and can achieve up to 50 notes a second. Additionally, it is more arboreal and tolerant of dry conditions.

They live in wooded habitats that have proximity to water. You will find them in farm woodlots, deciduous forests, swamps, and lakes. These tree frogs are inactive during the day and emerge to feed on insects at night.

Cope Gray Tree Frogs begin their breeding season from March to August. They hibernate during winter, and their spots include hiding under roots, leaf litter, and woody debris logs.

Green Frogs are not generally green. They can be greenish-brown, yellowish-green, brownish, olive, and rarely blue.

They have different habitats that include wooded swamps, lakes, marshes, ponds, and slow-moving streams. These frogs are solitary creatures and only seek companionship during the breeding season in late spring.

Even though this frog is a predator, it is also food to larger frogs, snakes, turtles, herons, raccoons, otters, and humans. To evade capture, the frog mimics the cry of a Mink Frog because it has a similar resemblance. This anti-predator technique may deter prey since Mink Frogs have a foul taste and a musky skin secretion.

Mink Frogs are mostly found around water lilies and can move on land if the conditions are moist and damp. At times, the frogs use water lilies to hide from predators. In addition, they produce an odor to deter predators.

Their breeding season starts in late May and ends in August. The males float on water while calling onto females.

Their sound resembles that of a metal hammer tapping on wood. After mating, the female can lay 1,000 to 4,000 eggs in a cluster.

The Northern Cricket Frogs live on the edges of water bodies with submerged vegetation. They are active all year, except during winter. Their breeding season starts in April and ends in August.

The Cricket Frog is diurnal and can jump up to 3 feet high. Its main diet is insects, but it prefers mosquitoes. The frog predators are fish, herons, minks, and snakes. To escape, it jumps in zig-zag motions.

As its name suggests, the Bullfrog is a large frog; it’s one of the big frogs in Michigan. It can weigh up to a pound and measure up to 8 inches.

Its diet includes almost everything it can ambush and fit in its mouth. This includes insects, worms, crayfish, tiny frogs, small turtles, small snakes, small birds, and small mammals.

The frog has several predators too. It is preyed on by aquatic turtles, snakes, birds, and humans.

This species prefers living in still shallow waters. You can find a Bullfrog at the edges of a pond, lake, or sluggish part of a stream.

It spends most of its life in water. When it is time to hibernate, the frog buries itself in the bottom mud. This occurs between Mid-October to April.

Their breeding season commences from mid-May to July.

Now you have the 12 species of frogs in Michigan. They all play a massive role in the ecological system as both predator and prey.

To help protect them, get as much information about them and Michigan’s state laws on frogs.

Why Are Ducklings Yellow? Are They All Yellow?