12 Turtles Found in Ohio (With Pictures) 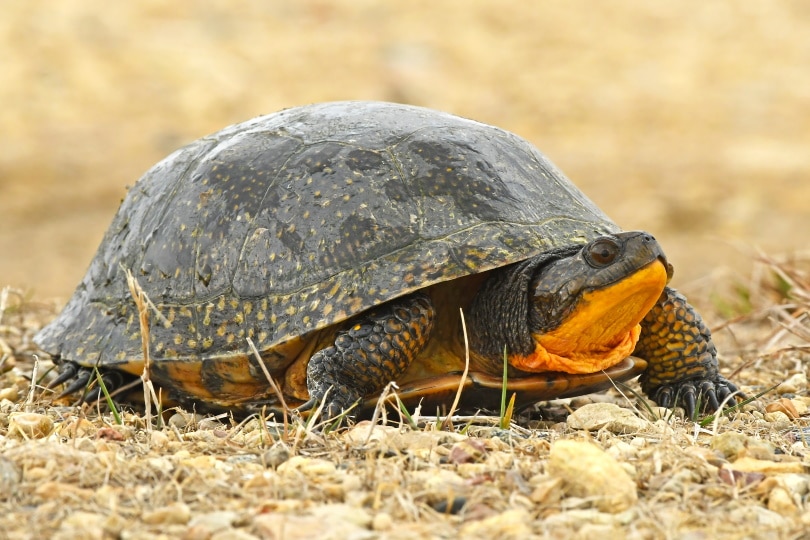 Did you ever find a small turtle along a roadside or during an outdoor adventure as a child? It’s always such an exciting feeling to see one of these incredible creatures in their natural element. In Ohio alone, there are 12 species of turtle—all of which differ tremendously.

Let’s get to know each one of these reptiles—and see if maybe you have seen a few of them in the wild a time or two.

The midland painted turtle is a colorful aquatic turtle that is a popular pet. However, in nature, it lives in slow-moving waters and creek beds. They are considered aquatic, but will exit the water for short visits to land.

These reptiles are diurnal, meaning they are most active in daylight hours. They spend their time regulating their body temperature by basking before returning to the water.

Turtles have a prolonged aging process—not reaching sexual maturity for up to six years. Even though these turtles are abundant in the pet trade industry, their numbers in the wild aren’t incredibly affected.

The spotted turtle is easily detectable by the classic white dots on its body and shell. While the spotted turtle still exists in Ohio, their population has drastically declined in recent years, experiencing a 50% decrease.

In the wild, the spotted turtle spends most of their time on the soft bottoms of creeks, lakes, and ponds. These turtles are omnivorous, snaking on aquatic plants and insects.

In the family Emydidae, the common map turtle is the most prevalent of all ma turtle species. They have a j-shaped jawline with plain neutral-colored peaked shells.

Rather than inhabiting small ponds or creeks, these turtles prefer large bodies of still water—like lakes and large rivers.

The red-eared slider might strike your memory pretty quickly. They are one of the most prevalent wild semi-aquatic turtles around. You can find them popping their head above water or basking on logs in the warm summer sun.

One really sad thing about the red-eared slider is their terrible introduction to the pet world. These poor turtles were sold in small keychains and pouches—totally alive—for quick sales. Without proper oxygen and food, these turtles slowly starved to death.

Thankfully, things have turned around since then, as education regarding the subject grew.

The wood turtle is a North American wonder, inhabiting most of Ohio. These turtles are semi-aquatic, though they mostly dwell on land. They interestingly have vibrant green on their bodies, contrasting their heavily neutral tone shells.

The wood turtle is dimorphic, meaning the males and females look different. Females have flat plastrons and short tails. Males, on the other hand, have concave plastrons with longer tails.

These turtles are omnivorous, meaning they eat both plant and animal material. They are great foragers, eating on both land and in water.

The common musk turtle is a small aquatic reptile with an interesting appearance. They have quite the nickname—”stinkpot”—given to them because of the funky-smelling odor they release if they are scared.

These turtles are carnivorous, snacking on an array of small fish and earthworms. However, they have been known to eat a little leafy green material from time to time.

It’s not abnormal to hear of someone keeping a musk turtle as a pet since they are easy to keep. However, you shouldn’t take one from the wild.

The eastern spiny softshell turtle is a big guy with a very original look—torturing a long, pointy snout. They have a very smooth, soft shell (hence the name) with various shaped circles. Females are much larger than males—and they can weigh up to 25 pounds.

These big guys usually are bottom dwellers, grazing on the foliage in ponds. Even though they are mostly aquatic, they do exit the water for good basking sessions. When they’re in the water, they love to bury themselves in the mud and sand.

Even though the midland smooth softshell lacks a tough layer of protection, they are zippy in the water. They can quickly get away from predators and out of sight.

These turtles are mostly carnivorous, eating crayfish, snails, and insects. They love free-flowing rivers and streams to swim. Their interestingly long necks and tube/like nose act as a snorkel. Softshell turtles are a sought-after meat source since they are tender.

Eastern box turtles are strewn throughout ohio—and were sometimes domesticated pets that people set free. In any case, these terrestrial turtles roam the forests, hiding amongst fallen leaves and briar bushes.

If they feel they are in danger, box turtles have the ability to retract into their shell, closing up completely. This defense mechanism protects their soft bodies from threats and damage.

If you’ve seen a Blanding’s turtle before, you’ll likely never forget. These reptiles have bright yellow chin and throat areas, so it’s easy to tell them apart. They have long necks that act as a periscope in the water to help them navigate.  They generally live at the top of Ohio, close to Lake Erie.

These turtles are remarkably shy and calm. If you have ever seen one, they likely ducked for cover before you got too close. They spend most of their time in the water, munching on a blend of crustaceans and plants.

Even though the Ouachita map turtle lives predominantly in the Mississippi River, they’re found in Ohio. The population is not high, but they are detected in rivers to this day.

These turtles have bands of lines and markings around their legs and faces, but their shells stay pretty plain—falling somewhere between brown and olive. The Ouachita is an omnivore, eating food items in the water and on land.

You might have heard, or experienced, the mighty jowls of the snapping turtle. These guys are the largest turtles in Ohio, and they plentifully fill ponds and other water sources—sometimes exceeding 25 pounds.

These turtles can bite off your finger, but they probably won’t. They tend to stay off to themselves unless they feel threatened. It isn’t uncommon to hear of people hunting snapping turtles for evening stew.

Now, next time you’re out on a hiking trip or kayaking down the river—maybe you’ll be lucky enough to come across a turtle you can recognize. Most turtles are naturally shy creatures, so spotting one will always be a real treat for any nature lover.

Of all the beautiful, fascinating turtles Ohio has to offer, which was your favorite?

10 Spiders Found in Illinois (With Pictures)