15 Types of Tree Frogs (With Pictures) 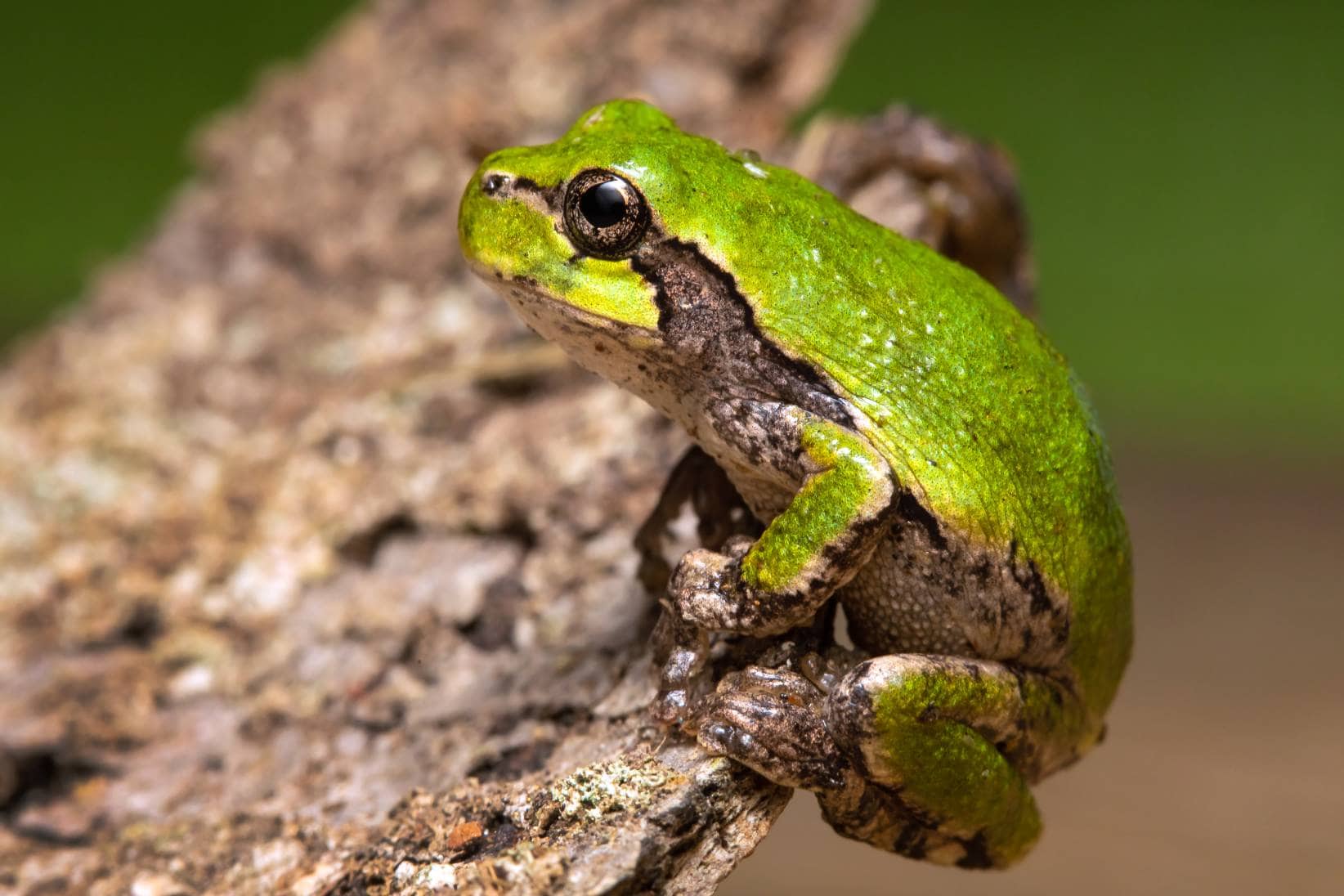 Despite this frog’s name, they may be gray, brown, or even green, depending on the environment that they are in. Gray Tree frogs have blotchy patches that can be green, gray, or cream. They grow to be only about 2 inches in size and live in most parts of the United States and Canada. They can be found living in forests, farmlands, and even in rural backyards.

These small frogs like to sing, which sounds like chirping to human ears. The singing of a Spring Pepper frog indicates the beginning of the spring season. These frogs are usually brown or tan and have large toes that help them quickly climb trees. However, they like to live among the debris that is cast from trees rather than in the trees themselves.

The Pine Woods tree frog is no more than 1 1/2 inches when fully grown. They are commonly found living in forests, especially where pine trees and bromeliads are growing. They tend to climb into trees and live high above the ground, where they are safe from potential predators. They mostly live in the southwestern part of the United States.

This is one of the most common types of frogs found in the state of Florida today. They typically live within urban settings, settling in around apartment buildings and businesses, where they sleep during the day and are active when the sun goes down. They have smooth green bodies and sometimes have small spots of white markings on their legs or backs.

This type of frog is native to Mexico and the United States. Northern Cricket frogs might be tree frogs, but they do not enjoy living in trees and prefer surrounding areas instead. They are one of the smallest tree frogs in existence, measuring in at just about 1 inch in length. They may be brown or green or any color combination in between, like gray and tan.

These frogs mainly live in the southern part of the United States where rock plateaus are present. Canyon Tree frogs are usually about 2 inches long and have brownish green bodies. They tend to blend in with the rocks and soil that make up their living environment. They are carnivorous beings and spend most of their time sleeping during the day.

The Pacific Tree frog is unique in that they have a black “mask” or eye stripes that extend over the eyes and as far as the shoulders. White and yellow are typically on the bottom sides of these frogs. They are typically found living in British Columbia, Mexico, and parts of the United States, such as Washington.

These bright green frogs are known for the strikingly beautiful purple-and-white stripes that are featured along the sides of their bodies. Their bellies are white, and their toes are a brownish-yellowish color. Pine Barren’s tree frogs live in forests around the New Jersey Pine Barrens area and have spread out to inhabit places like North Carolina and Alabama.

These frogs are pets of the Hylidae family and live throughout the United States and Mexico. They live not only within forests but also wetlands, marshlands, and shallow rivers. These are among the largest types of tree frogs currently in existence. They have blunt, short noses and large back legs to help them hunt their prey.

Although these are tree frogs, they are commonly seen in and around the streams through mountains in the United States. They are predominant natives of Santa Monica and get to be between 1 and 2 inches when fully grown. The California tree frog is carnivorous and dines on spiders, centipedes, small lizards, and insects of all kinds.

These tree frogs eat other frogs and snakes and lizards, so they can be dangerous to ecosystems and render other types of tree frogs endangered. The Cuban tree frog produces an irritating mucus that makes human eyes and noses react as if allergic or ill. They can be up to 3 inches long when adults and can be white, green, brown, or gray in color.

These are among the heaviest and largest tree frogs in the world. They have bright green skin and dark, sometimes black, spots all over the body. They are commonly found in Georgia and South Carolina, but they are spotted occasionally in nearby states. These frogs live high in the trees and come down only to hunt prey when necessary.

American tree frogs are popular pets that can live happily in an aquarium habitat setting. They do still live in the wild, though, where they are found in the southeast areas of the United States, including Virginia and Florida. They do not enjoy handling, so they are not the best pets for those looking to interact daily.

This frog’s colors change when the temperatures change. When it is hot outside, the Bird-Voiced tree frog is usually light grey or green when it is hot outside. When the weather gets cooler, their skin tends to turn darker. There is usually a dark brown spot located on their back, and their legs are usually darker than their body.

As their name suggests, these frogs sing together at night, which sounds like crickets to the human ear. The Blanchard’s Cricket frog is considered endangered in the state of Wisconsin and loves to live near ponds, streams, rivers, and other bodies of water. They look like many other tree frogs, so it is hard to identify them in the wild.

With so many tree frogs in existence, one might think that they would be easy to find while hiking in the woods or forests. However, this is not the case because most sleep throughout the day. You would be lucky to find one while out and about, but patience, commitment, and a keen eye can pay off!

Rachael has been a freelance writer since 2000, in which time she has had an opportunity to research and write about many different topics while working to master the art of fusing high-quality content with effective content marketing strategies. She is an artist at heart and loves to read, paint, and make jewelry in her spare time. As a vegan, Rachael is obsessed with helping animals in need both in her community and anywhere in the world where she feels she can make a difference. Animals also happen to be her favorite topic to write about! She lives off the grid in Hawaii with her husband, her garden, and her rescue animals including 5 dogs, a cat, a goat, and dozens of chickens.

How to Stop Unhealthy Feather Plucking in Birds (Plus Treatments)