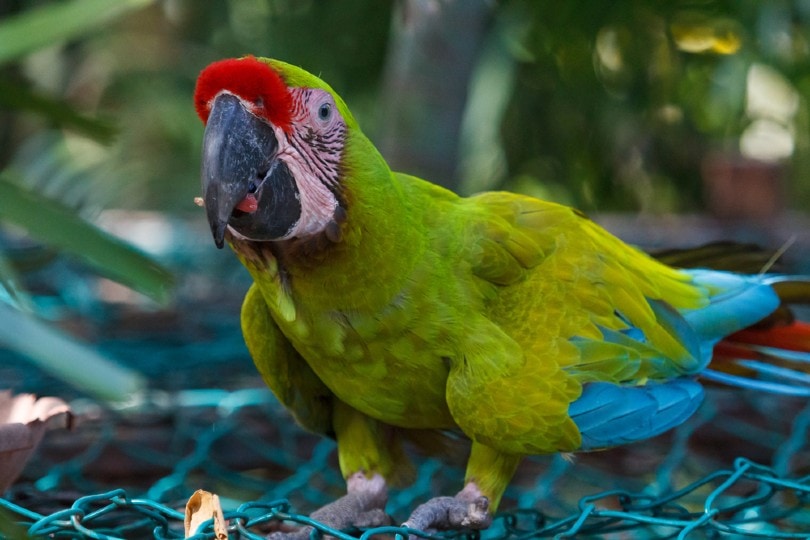 The Red-Fronted Macaw is a critically endangered member of the parrot family. They are found in the wild only in Bolivia. In captivity, these birds breed well and this has helped increase their numbers. They are curious and intelligent pets that require a great deal of attention from their keepers. Read on to learn more about the Red-Fronted Macaw.

The Red-Fronted Macaw is found in only one place in the wild: the mountains of central Bolivia. Unlike many other members of the parrot family, these Macaws live in a desert-like climate, rather than a tropical one.

Unfortunately, their limited wild habitat has been destroyed by expanding agricultural and urban development. The Red-Fronted Macaw is now considered critically endangered in the wild. Some estimates claim that there may only be about 150 of them left.

These birds do breed successfully in captivity, which has helped expand their numbers as pets and has perhaps kept the species alive.

The Red-Fronted Macaw is not necessarily a common pet, due to their limited numbers. However, those who have them as pets describe their birds as affectionate, social, intelligent, and curious. They enjoy spending time with their keepers and love to play. They also like to investigate your home and find fun things to explore.

As long as they have been socialized early, these are also docile birds. They don’t mind being handled and even like cuddling with their human companions.

Like most Macaws, the Red-Fronted Macaw is noisy! They make loud screeching sounds regularly. They will also sing and can learn to mimic human speech. Since they are so loud, these birds are not well-suited to apartment dwelling.

The Red-Fronted Macaw is a medium-sized bird, with adults reaching between 21 to 24 inches in length. Their primary color is bright green. They have a red forehead, eye patches, shoulders, and thighs.

There are light pinkish bands around their beaks and eyes. They have bright-blue feathers at the tips of their wings and on their tail. Both male and female birds of this species have the same markings and colors.

Caring for the Red-Fronted Macaw

The Red-Fronted Macaw is a notoriously healthy bird, as long as they are provided with the right environment. These birds can live for up to 50 years in captivity if properly cared for.

The Red-Fronted Macaw is a rare bird. They are also fairly large for a pet bird. While they will get along in pairs, it’s highly unlikely that you will find two available. Also, unless you have a significant amount of space in your home, their need for room to roam will be too much to accommodate.

Furthermore, these birds breed quite well in captivity. Unless you plan to raise an entire family of Macaws, you’ll want to have just one as a pet.

You will need a cage that is large enough for your Macaw to spread their wings and move around freely. They will be happiest if you give them more time to move around the house without caging. Make sure the large cage that you select is made of sturdy wires and has a good lock. Macaws are heavy chewers and have also been known to learn how to pick locks!

Since they are intelligent and curious, you’ll need to bird-proof your home. Make sure there aren’t any hazards like ceiling fans, hot surfaces, and open doors that could enable escape. You’ll also want to watch that they don’t chew on anything dangerous, like electrical wires.

They do love toys, climbing, and perches, so you’ll want to make sure they have an abundance of things to keep them entertained.

The Red-Fronted Macaw is normally healthy, but you’ll need to clean up after them frequently to maintain this good health. Any cage areas, perches, toys, and food bowls must be cleaned regularly to prevent the spread of bacteria.

The Macaw is good at keeping themselves groomed. However, you’ll need to make sure they have access to water so they can clean their feathers. They also enjoy playing in the water, so it will give them something fun to do too! You’ll want to regularly bring them to a qualified avian veterinarian for feather and nail clipping.

The Red-Fronted Macaw is generally a healthy bird. They’re not known to have any common health issues outside of a few occurrences of Macaw wasting disease (or proventricular dilatation syndrome). This viral infection affects the nerves that supply the gastrointestinal tract of birds. There isn’t any known cure and it will eventually lead to death.

The other problems that can occur in pet Macaws are general bacterial infections that result from interactions with other pets or unclean environments. Keeping your bird’s cage and belongings clean and going to regular veterinary check-ups are the two best preventative measures that you can take to ensure a long, healthy life for your Macaw.

In the wild, the Red-Fronted Macaw eats seeds, nuts, fruits, vegetables, and grasses. Their diet should be similar when they are pets. You should feed them a commercial birdseed mix formulated specifically for Macaws. This should make up about 60-70% of their diet.

Macaws are active, social birds that need plenty of activity every single day. They should have spaces where they can fly, climb, and perch. They love toys and need things that they can chew on. Plenty of wood, sisal, and leather toys for birds should be on hand for their use at all times. If you don’t give your bird enough exercise, they will become bored, depressed, and destructive.

Where to Adopt or Buy a Red-Fronted Macaw

Even though these beautiful birds are bred in captivity to be sold as pets, they are extremely rare. You will likely have a difficult time finding this specific species of Macaw. If you do find a breeder who has these birds available, you should make sure that the breeder is reputable and produces healthy birds.

It’s also possible that you might stumble across a Red-Fronted Macaw from a parrot rescue organization or shelter, but this is not highly likely.

The Red-Fronted Macaw is one of many birds in the parrot family that is critically endangered. Luckily, these birds respond well to captive breeding, so their numbers have been able to rebound in captivity. If you can find one available as a pet, you’ll need to provide them with plenty of care and attention. In return, you’ll have an affectionate, long-living companion.