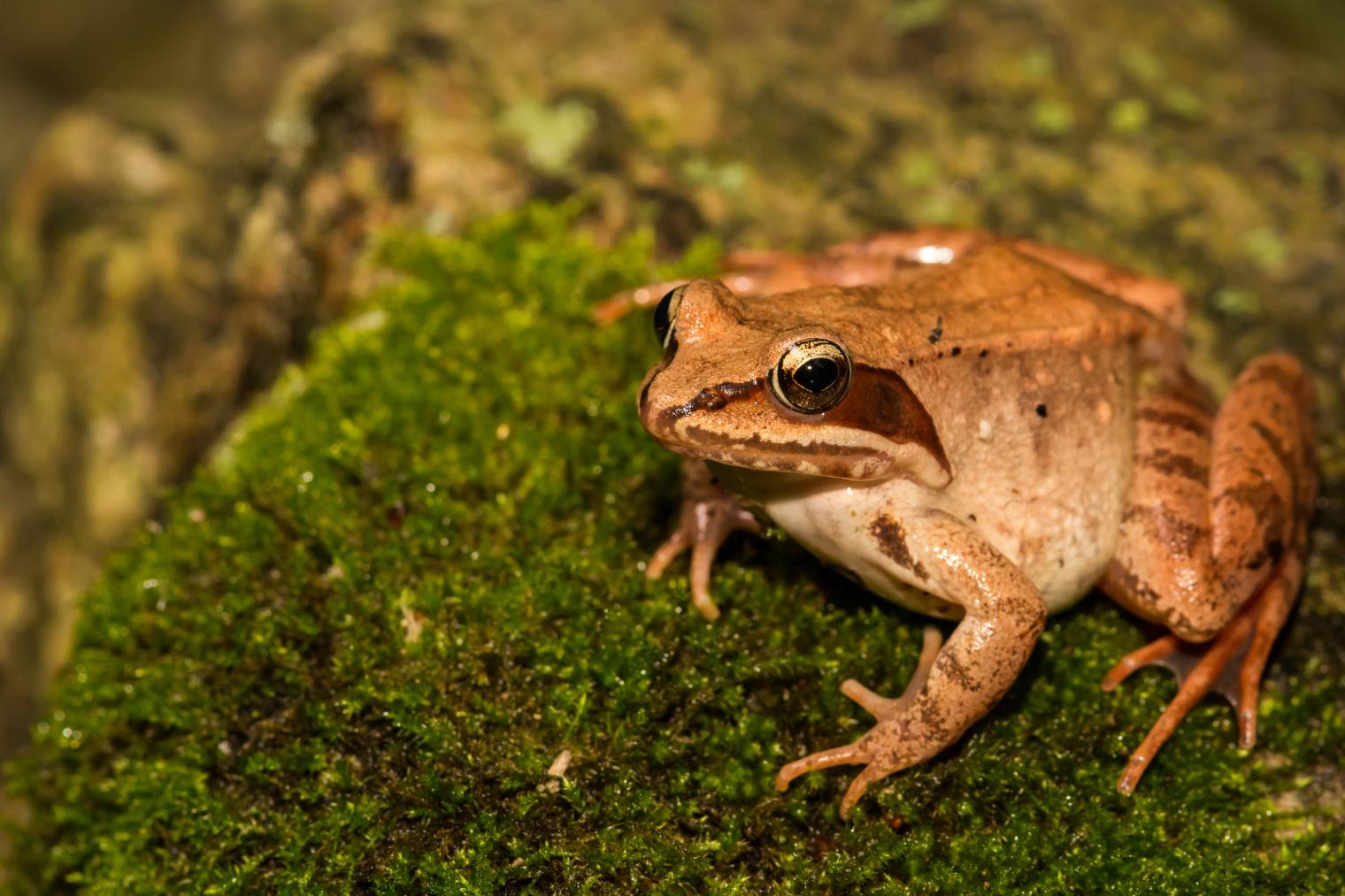 Finding, identifying, and listening to frogs can be an amazingly satisfying pass time. It’s not only rewarding. It helps you learn about the environment in which they live. If you live in Maryland or intend to visit there soon, keep reading while we list several frogs you can find there. For each entry, we’ll include a picture and a short description so you can learn more about it.

The American Bullfrog is one of the largest frogs in the world, and it’s native to the western United States. It’s a popular food, and people ship it worldwide, where it often becomes an invasive species. They make great pets, especially the albino version. However, it can become aggressive toward other males.

The Northern Leopard Frog is quite common across the northern United States, including Maryland. It has a green or brown body with small dark spots covering its back, giving it its name. It enjoys permanent bodies of water like lakes and ponds, and you can also find them around slow-moving streams.

The Green Frog has a wide range that extends all along the eastern part of the United States. These frogs like to sit on the shoreline facing the water so they can jump in quickly if there is any danger. These frogs can also change their sex on occasion.

If you prefer a challenge, the Spring Peeper is for you. Sightings of these frogs are quite rare, but you can hear their mating call almost anywhere in the eastern United States, including Maryland. Its chirping call often marks the beginning of spring. It’s a nocturnal insectivore that you will often find at the base of shrubs and other low-lying vegetation.

The Gray Treefrog is an interesting species because it can change its color like a chameleon to blend in with its surroundings. It can transform from grey to green to brown quite quickly, and it inhabits most of the eastern United States. These frogs stay high in the trees until it’s time to breed, and they can survive temperatures as low as 17 degrees.

The Pickerel Frog is usually brown with what appears to be hand-drawn squares on its back. These frogs can emit toxins when threatened by predators, making this species the only poisonous frog in Maryland. This toxin helps this small frog from being eaten by larger frogs and snakes, but it can also cause skin irritation to humans.

If you are visiting Maryland from the south, then this may be your chance to see the Wood Frog. This species is limited in range to the northeastern United States, and Maryland is right on its border, making it well worth the look. These frogs can travel a great distance when mating, and they can survive cold temperatures due to a natural antifreeze in their blood.

If you are visiting Maryland from the north, this is your chance to see the Southern Leopard Frog. This species is only native to the southeastern United States, and Maryland is at the edge of this range. These frogs have tiny dark spots on their back that resemble leopard pots which gives them their names.

The Northern Cricket Frog doesn’t have as wide a range as many of the frogs we have looked at so far, but you can find them in Maryland. It’s a member of the tree frog family but prefers to spend its time on the ground rummaging through loose debris.

The American Green Treefrog is more of a southern frog species, but you can find it in a thin band that comes up the east coast and includes Maryland. Since these frogs are so rare this far north, it’s well worth taking the time to find one in its natural habitat. It also makes a great pet, but we recommend purchasing a captive-bred frog, so you don’t interfere with the wild species.

The Pickerel Frog is the only poisonous frog in Maryland. It’s also the only poisonous frog in the United States, so many people like to seek it out. The toxin they secrete seems to be quite effective at deterring snakes and other predators but is only likely to cause some minor skin irritation to humans. We recommend wearing gloves when handling any frog to prevent injury to either party.

The Spring Peeper is the smallest frog in Maryland, and it’s also quite elusive. It spends its time high in the trees and rarely ventures to the ground below. You will know it’s there when you hear its high-pitched call that resembles a baby chicken. Several of them can sound like sleigh bells.

American Bullfrog is the largest frog in Maryland and one of the largest frogs in the world and is a delicacy in many restaurants. It’s a hardy species that will eat almost anything, so escaped specimens can quickly adapt to the environment, and it has become an invasive species in other parts of the world.

As you can see, there are several frogs worth looking for while you are spending time in Maryland, and you don’t need to worry about any poisonous ones. The Pickerel Frog is unlikely to cause any serious issues, especially if you only handle it wearing gloves. The Spring Peeper presents the greatest challenge because they tend to stay high up and out of reach.

We hope you have enjoyed reading over this list and found a few frogs you would like to see. If you were surprised that there are so many different species, please share these ten frogs found in Maryland on Facebook and Twitter.