14 Snakes Found in Louisiana (With Pictures) 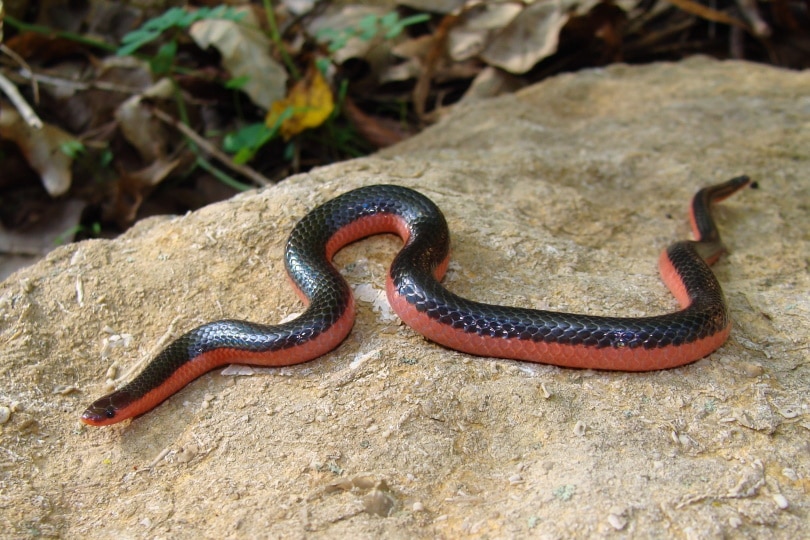 Snakes can be extremely dangerous, so it’s always a smart idea to learn what varieties you might encounter when you are out walking. Luckily, most snakes are not poisonous, but your life can depend on your ability to determine the ones that are. We are going to list several snakes that you can find in Louisiana to help you understand the wildlife a little better. For each entry, we’ll show you a picture of what it looks like, along with a short description to help you learn a little more about it.

The Ring-necked Snake is one of the non-venomous snakes that you can find in Louisiana. Several species are all easily identifiable by a ring around the body where the neck separates the head from the rest of the snake. You can find them all over the United States, and they are quite plentiful in Louisiana.

The North American Racer is another non-venomous snake that you can find all over the United States, including Louisianna. It gets its name from the high speeds it’s able to attain. It’s active during the day and prefers to stay in brush or trash piles near water.

The Scarlet Snake is an attractive species that is easy to confuse with a poisonous Coral Snake. These snakes are not venomous and are easy to find in Louisianna, but their numbers are declining in other states like New Jersey, where they are becoming quite rare. These snakes are not captive bred, so any pets will come from the wild, making problems worse.

The Western Worm Snake is another non-venomous snake that you can find in Louisianna. It can release a terrible smelling musk from its cloaca (a snake’s butt) if stressed, which will usually send the intruding party on its way. It usually has a dark top with a light pink underside.

There are two varieties of the Earth Snake, the Eastern and the Western. It has a heavy bi=ody and is usually a dark gray. It has smooth skin and doesn’t mind when you pick it up, so it makes a fantastic pet.

There are several variations of the Garter snake that you can find almost anywhere in the United States, including Louisianna. They usually have yellow stripes on their back that run the length of their body. It’s a daytime snake that usually hides among dense shrubbery.

The Flat Headed Snake is one of the smallest snakes in Louisianna, and it typically doesn’t get any larger than about eight inches. It’s a smooth snake that almost resembles a worm and has a gray, brown, or reddish-brown color. The head often looks slightly darker than the rest of the body.

The Southeastern Crowned Snake is a small and slender snake that you can find in several states, including Louisianna. It prefers sandy soil with plenty of dead leaves and other organic litter to help provide cover. It’s a smooth snake that is generally active during the day.

The Redbelly Snake is easy to identify, thanks to its bright orange underside. The head is usually darker than the rest of the body, and there will be a white dot below each eye. It usually grows to about one foot long and is non-venomous.

The Eastern Diamondback Rattlesnake is the most dangerous snake in Louisiana. In fact, it’s the most poisonous snake in America. Its body is usually brown or tan, with a pattern of dark diamonds along the back. These snakes get quite large, with some reaching up to seven feet. However, they are currently critically endangered, so they might not be with us much longer.

The Timber Rattlesnake is another dangerous animal that you can find all over Louisianna. Colors can vary significantly from one snake to the next, and they will darken over time. You will usually find these snakes in the forest.

The Eastern Copperhead is easy to identify because of its bright copper color. It’s a little hardier than many other species, and they continue to press into new habitats.

The Texas Coral Snake is poisonous and can deliver a painful bite. It likes to spend most of its time in underground burrows and only comes out to hunt. These snakes have one of the most potent bites, but because they spend so much time underground almost, no one gets bit.

The Cottonmouth is another venomous snake that you can find in Louisianna. It also goes by the name Water Moccasin, and it likes to spend plenty of time in the water. It can deliver a potentially fatal bite but usually coils itself up and shows its’ fangs before it resorts to biting.

The Cottonmouth, also called the Water Moccasin, is the only snake you need to worry about when you enter the water.

As you can see, there are plenty of snakes you can run into while going for your morning hike. However, the vast majority of them are not poisonous, so you don’t need to worry too much. Take the time to learn how to identify each of the poisonous snakes so you can identify them quickly, even at a distance. Some of these snakes will also make a great pet, but we recommend purchasing one from a breeder that has the skills to captive breed your snake. Wild-caught pets are harder to tame, and it could harm the natural population.

We hope you have enjoyed reading over this list and found the answers to your questions. If you found some breeds that you didn’t know existed here, please share this guide to 14 snakes found in Louisiana on Facebook and Twitter.

Are There Scorpions in Pennsylvania?

15 Snakes Found in Oregon (With Pictures)