15 Snakes Found in Oregon (With Pictures) 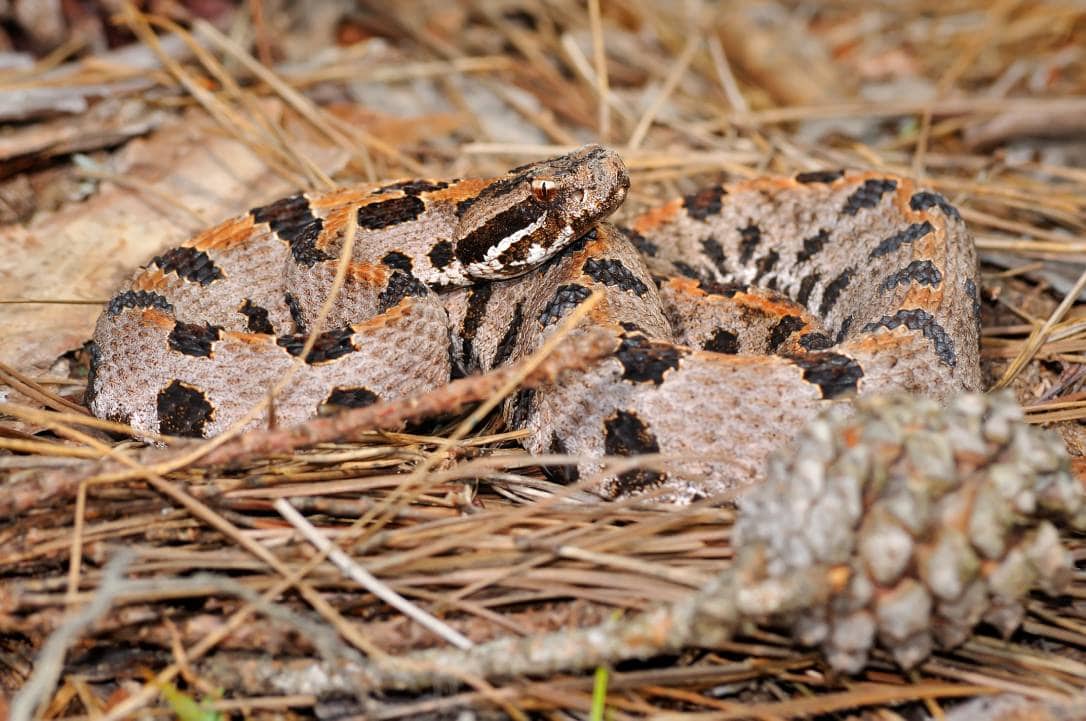 Oregon is home to a variety of amphibians, birds, mammals, and ocean life. As for reptiles, 15 snakes call Oregon home. Some of these snakes are common and can be found in other states, whereas others have very interesting diets.

Whether you are living on the Oregon coast or high up in the mountains, you should be able to find one of these snakes with a little bit of patience.

Unfortunately, there is one venomous snake to be aware of in Oregon. If you hear an odd rattling coming from nearby, you have likely stumbled upon this snake. It’s important to seek medical attention if you are bitten by the one venomous snake: the Western Rattlesnake.

If you are concerned about poisonous snakes in Oregon, you only have one to worry about, the Western Rattlesnake. The Western Rattlesnake can be found in many habitats, including deserts and open forests alike. That being said, you are most likely to find them near rocks, logs, and cliffs.

Obviously, the most distinctive feature of the Western Rattlesnake is the rattles at the end of the tail. As for its less distinctive features, its head is almost diamond-like, and the rest of its body is brown with black and tan colorations that make it fit in with the desert.

Oddly enough, there is only one water snake found in Oregon, despite the fact that the state is littered with bodies of water. The water snake in question is the Pacific Coast Aquatic Garter Snake.

There aren’t many water snakes in Oregon, but there is one: the Pacific Coast Aquatic Garter Snake. This snake will be found in meadows, marshes, and moist forests near bodies of water. You can find it eating on riparian vegetation or basking on boulders. These snakes primarily eat fish eggs, fish, tadpoles, and other creatures around the water.

The Pacific Coast Aquatic Garter Snake has almost a checkerboard appearance with the colors black and yellow or tan. Its head is primarily black, though.

Luckily for humans, the majority of snakes in Oregon are terrestrial and non-venomous. In other words, you are most likely to find them on the ground, but you don’t have to worry about their venom sending you to the hospital, though their bites may still hurt.

The Common Kingsnake is a pretty large reptile and slightly terrifying looking snake. It primarily feeds on other snakes and amphibians. They prefer to hang out along bodies of water, but they are not aquatic. You can especially find them in the Rogue and Umpqua river valleys.

The Common Kingsnake typically has two colorations, mostly black and cream. The lighter color is much less prominent than the darker color, but it stands out, nonetheless.

Similar to the Common Kingsnake is the California Mountain Kingsnake. These snakes are typically found in southwestern valleys of the state. They especially like to be near rotting logs or around streams. California mountain king snakes are loved because of their striking appearance, which includes bands of black, cream, and red or orange.

The Rubber Boa is one of the more unique snakes in Oregon. It is a constrictor that can be found in many habitats, like desert scrub, woodlands, and deciduous and coniferous forests. As constrictors, Rubber Boas typically only eat small mammals, such as mice and shrews.

As for appearance, the Rubber Boa has a very simple look. It is primarily brown or black. In many ways, it looks like an oversized earthworm.

The Racer is a snake you are most likely to stumble upon in open areas. It prefers juniper woodlands, meadows, and sagebrush flats. Unlike many other snakes, it avoids dense forest and similar areas. Racers will eat a variety of prey, including lizards, crickets, and small mammals.

Because Racers hang out in open areas, they tend to be colored like dirt, which is light brown with hints of green or pink. This allows them to blend in very easily with their surroundings.

The Ringneck Snake is a very striking reptile. It primarily has a dark gray or black top and red underbelly. Ringneck Snakes are mostly found in moist habitats, such as logs or stumps. More so, they like hiding out in pine-oak woodlands or canyon bottoms. You can especially find these snakes in the Willamette Valley grasslands.

Unless you are a huge fan of snakes, you have probably never heard of the Sharp-tail Snake before. This snake is almost exclusively found in moist forests because it specializes in eating slugs. This is one of the few snakes that will eat slugs, let alone eat slugs exclusively.

Even though these snakes only eat slugs, they still have a slightly intimidating appearance. They appear dark gray, and their scales are distinctively noticeable.

The Night Snake is one of the desert snakes in Oregon. It will typically be found near rocky outcrops. During the day, it often hides out in rocky crevices so as not to get too hot.

Unlike other snakes, Night Snakes almost exclusively eat cold blooded animals, such as lizards or frogs. Additionally, they are primarily nocturnal, which explains why their diet consists of cold blooded creatures.

You are most likely to find the Striped Whipsnake in the northwest, such as around the grasslands, flat, or canyon bottoms. It can also be found in juniper or pine-oak woodlands, though you can occasionally find them in the dry bushy areas of southwestern Oregon.

As its name suggests, the Striped Whipsnake is decorated with stripes that run along the entire length of the snake’s body. These stripes are typically light colored, such as cream or tan. The rest of its body is brown or light gray.

The Gopher Snake can be found in many different habitats, including deserts, grasslands, woodlands, and open forests. It particularly likes agricultural regions where there is a lot of cover to hide underneath.

Even though these snakes can be found in really green and luscious environments, they are primarily tan with black or dark brown spots. By appearance alone, you would expect Goopher Snake to only be found in desert regions, though this is not the case.

The Western Ground Snake is a really small and docile creature. It is primarily found in areas where there is sandy soil. More specifically, it likes to hide underneath objects so that it can hide from the sun and find excess moisture. Because these snakes are so small, they mostly feed on small insects.

The Western Ground Snake is very cute yet striking. It has a primarily orange body with black stripes. The orange color can either be super bright or dull. Interestingly, these snakes have shorter lifespans in captivity than in the wild.

The Western Terrestrial Garter Snake is very similar to the only aquatic snake in Oregon, but it is found on the soil. It can be found in many habitats, and Oregon is home to four different subspecies of this snake. As a result, you can find these snakes just about everywhere in the state and snacking on a variety of foods.

The Western Terrestrial Garter Snake doesn’t quite have a checkerboard appearance, but it is still very patterned. Most notably, it appears to have multiple stripes that run down the entire length of its body. It also has other diamond or checkerboard patterns, though they are slightly more dulled than the aquatic version.

The Northwestern Garter Snake is primarily found in meadows and forest clearings. They love to bask, but they are mainly found in dense vegetation. You can especially find these creatures in the Willamette Valley and in suburban or city parks.

Much like the other Garter snakes, the Northwestern has stripes that run along its entire body. However, it is not black or dark gray. Instead, the Northwestern Garter Snake is tan or light brown with hints of tan.

Finally, the last snake on our list is the Common Garter Snake. This snake can be found in many habitats, but it prefers wet forests and meadows. That being said, you can also find them in open valleys and far away from excess water.

So, you can find snakes all over Oregon, from the mountains to the rivers. Luckily, only one of these snakes is venomous. Still, be careful when around any snake because their bites can still hurt, even if it is not fatal. Plus, why disturb the wildlife if you can manage it?

14 Snakes Found in Louisiana (With Pictures)

12 Snakes Found in Illinois (With Pictures)