17 Frogs Found in Alabama (with Pictures) 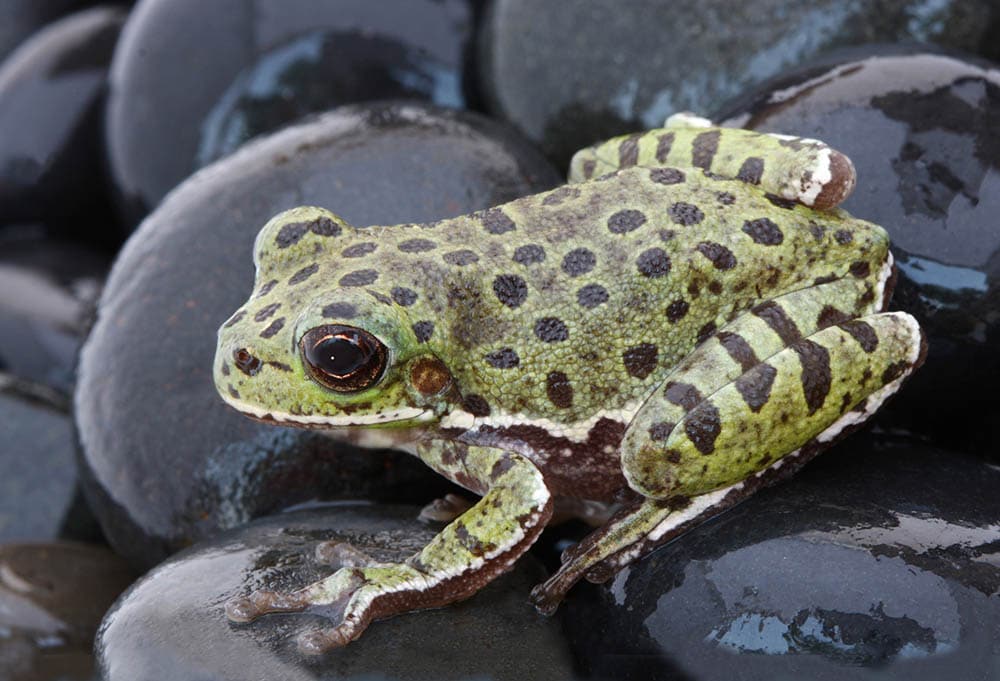 Alabama is home to an abundance of frogs. Their calls fill the night sky throughout the spring and summer months as frogs race to breed before the winter months.

Most frogs in Alabama can be found in moist environments, where they can easily prevent their skin from drying out. However, a few species might surprise you.

There are no truly dangerous frogs in Alabama. While one species is toxic, you would have to eat it to become affected. Their poison is primarily to prevent predators from eating them, so the average person will not be affected.

Unless you’re eating random frogs, you have nothing to worry about.

In this article, we’ll take a look at some of the most common frog species in Alabama.

The Pickerel frog is the only poisonous species in the United States. It is gray to light brown with prominent dark spots across its back in two rows. They have a small spot above each eye and usually one on the snout too.

This species can produce skins secretions that are irritating to people and other species. However, they aren’t lethal in most cases. Unless you eat the frog, your chance of adverse side effects is meager.

This tiny frog has a call that resembles the sound of a cricket – hence its name. They range from gray to greens to brown. Some of them are quite colorful, while others are less so. Their underside is lighter colored or white.

Unlike most frogs, this species is most active during the day. They are found in aquatic habitats, such as ponds, lakes, and streams.

Typically, these frogs are light green. But they can become dark olive under less-than stellar conditions. Their belly is often a lighter color. Their sides are marked with a dark brown stripe – which is their main distinguishing feature.

These frogs are rather plump, with obviously rounded toe pads.

This species is exceptionally slim and petite. They are tinier than most treefrogs, though the females are a bit larger. Their coloring is generally brown, gray, or green. They often change color based on their environment and stress level.

They prefer to reside in river valleys and lakeshores. They are opportunistic feeders that primarily consume spiders and small insects. They are nocturnal and spend most of their time in trees.

This tree frog is most of a walker and a climber – not a jumper. They have adhesive discs on their toes, allowing them to climb most surfaces with eats.

Their coloration ranges from light gray to dark gray. Some are brownish or greenish in tone, though. They have bright orange thighs, which separate them from many other frog species.

They are nocturnal and prefer swamps and similar wooded areas.

These tiny, slender frogs range from brown to reddish, though gray and green are also not uncommon. They can change colors depending on the temperature and environment. Stressed frogs will often be duller.

Primarily, these treefrogs are located in pine woods. They can occur in open areas as well, especially if a pine forest is nearby. They temporarily travel to pools and wetlands for breeding purposes. Breeding will not occur where fish are present, so small pools and swamps are used.

Like many frogs we’ve discussed, the Northern Southern Peeper is usually brown. They have a distinctive, dark-colored “X” marking on their back, making them identifiable.

These frogs are mainly observed during the breeding season when they spend their time around ponds. The rest of the year, they hide in moist, wooded areas.

This species comes out earlier than most and is usually one of the first to be heard. They can begin singing as early as January.

The Upland Chorus frog ranges from brown to gray. They have a dark stripe that begins at the tip of their snout and continues down their back. They also have a dark triangle between their eyes. These markings make them pretty easy to tell apart from other species.

This species is nocturnal and can usually be found in grassy areas. They also inhabit marshes and moist woodlands. During the breeding season, they will visit temporary pools in the woods and fields.

These frogs spend much of their time in pinewoods and sandhills. They prefer sandy soil and bays for breeding purposes. They may also use artificial ditches for this purpose. Otherwise, they spend their time hiding in caves and under debris.

These species can be readily identified due to their three dark stripes broken into spots down their back. Their skin is covered in tiny bumps that give them a somewhat warty appearance.

These frogs are very tiny – as their name suggests. They come in many different colors, ranging from tan to red to grey. They also have a prominent dark stripe that extends from their snout and onto their sides. However, their most characteristic feature is their petite size.

This species is sometimes mistaken as the baby version of other frogs.

They prefer open grass wetlands and similar areas. They may also reside in savannas, pine flatlands, and cypress ponds.

While chorus frogs are pretty standard, this particular species isn’t. They are considered a moderate conservation risk.

They come in many different colors, including brown, red, and bright green. Their coloration is not a reliable way to identify them. They do all have bold dark striping along their sides, but even this tends to vary from individual to individual. Many will have a dark triangle on the top of their head between their eyes.

While these frogs are pretty giant, they are also slim. Their skin is smooth and usually bright green. Some have a green or yellow tint. The prominent white stripes on either side of their body are an easy way to identify them.

These frogs prefer wet and moist areas – like swamps, lakes, and streams. They hide during the day in moist, shady areas near the water.

For a treefrog, this species is relatively large. They are also quite plump, which makes them appear larger than they are. They range in color depending on the temperature and environment. They have spots, but these are sometimes barely noticeable.

These frogs can both climb and burrow – making them a bit unique. They are found in a variety of environments, including farmlands, pastures, and woodlands. They spend much of the summer in the treetops, seeking out warmer areas underground during the winter.

Technically, this name refers to two different species. However, they are somewhat similar and very closely related.

Both are considered vulnerable and rare within the state. Conservation efforts are underway.

They prefer forests with sandy soil. They are highly terrestrial but require isolated wetland sites for breeding. They often travel very far from their breeding sites and return later. They primarily eat insects and other small animals.

These green frogs are quite giant – sometimes reaching up to six inches in length. They have webbed feet and a sharply pointed nose. Their snout is quite distinctive compared to other species. Their eardrum is very large and apparent.

They prefer bodies of water surrounded by vegetation – including ponds, lakes, and marshes. They may also be found in river swamps.

They prefer freshwater habitats and spend much of their lives near water. They are aquatic but may stray from their pond when foraging.

This species is scarce. Their distribution is mainly local, and they are thought to be declining rapidly.

They can be distinguished from other frogs due to their dark facial masks. Their body coloration varies quite a bit, though.

These hardy frogs can withstand frigid temperatures. They are more common in northern areas, though their distribution in Alabama is limited. Their status is so poorly known that they may no longer be located in this state.

Alabama is home to many unique frog species. Treefrogs are pretty common and makeup about half of all the frogs in Alabama. In general, treefrogs tend to be relatively small and spend much of their time in trees – there are some expectations to this, though.

“True” frogs are much more significant. Some of these frogs spend much of their life on land, while others are mainly aquatic. Their habitat varies widely from species to species. Some don’t exhibit what you would imagine being “typical” frog behaviors.

There are only one poisonous species of frog in Alabama – and it is not dangerous. They excrete a toxin when scared that can irritate predators, including humans. However, it is generally not a primary concern unless you go around licking frogs.

18 Frogs Found in Georgia (with Pictures)

10 Frogs Found in Ohio (with Pictures)