Can Rats Eat Onions? What You Need to Know! 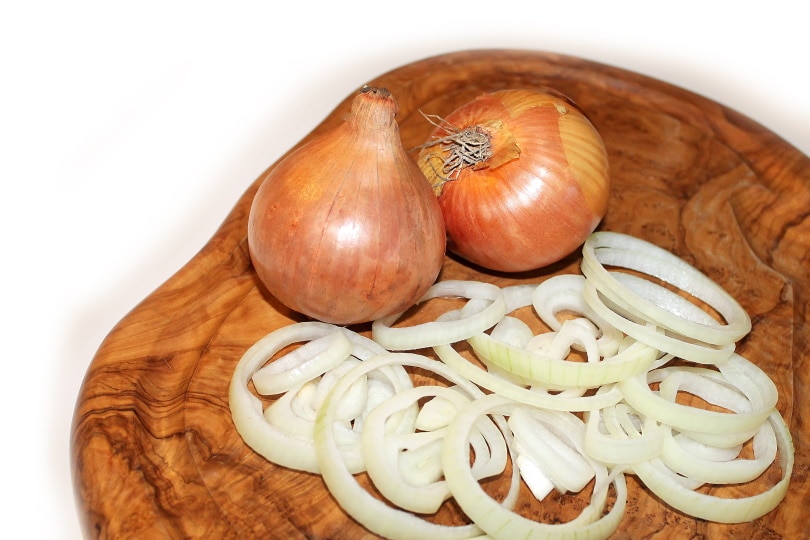 Rats can eat all sorts of foods. They’re opportunistic omnivores, meaning they will eat whatever foods are available. However, that doesn’t mean that all foods are safe for them to eat.

Onions are toxic to rats. They’re toxic to most animals, including humans. However, we’re so large that we would need to eat an ungodly amount of onion for it to matter. Rats are much smaller, so they only need to eat a little before the toxins affect their bodies.

The toxic chemicals in onions are broken down in high heat. Therefore, if you feed your rat cooked onion, they should be okay. However, there is little reason for rats to eat onions, to begin with, so we typically don’t recommend feeding them to rats at all – even if they are cooked.

It should be noted that rats are unable to vomit. They physically can’t do it. This makes onions very efficient at killing them as they can’t expel the onions after they’ve eaten them.

Rats have no way to get the onion out of their system, so onions may be particularly harmful – even in smaller amounts.

Is Onion Toxic to Rats?

Onions are very toxic to rats. They won’t kill them instantly, but they will make them very sick. Large amounts of onions would be required to kill a rat outright, but that doesn’t mean that a bite or two is okay.

Onions are likely to make your rat very sick. Even if it doesn’t kill them, we don’t recommend that anyone feed their rat onion – even just a tiny bit.

Rats that eat an onion once aren’t likely to diet or feel many long-term effects. However, over a long period, onions can quickly kill rats. Therefore, they should not be part of your rat’s diet in the least.

The onion’s strong smell typically puts off rats. Therefore, they usually don’t eat onions. The only occasions where rats may happily eat onions are mixed with something else that they love. In these cases, the good smells may cover up the onion, and the rat may accidentally eat it.

This is one reason why onions aren’t perfect for pest control. Rats typically know they shouldn’t be eating it and avoid it.

However, the smell of raw onion does make a good repellent. Some rats may avoid an area if it smells like onion.

We don’t recommend keeping rats in the kitchen while you cut up onions. They’re likely not to appreciate the smell very much.

Rats don’t like the strong, spicy smell of onions. They usually avoid them when possible unless another food covers masks their smell.

The only time that rats eat onions is typically when they are in a larger meal. If there are onions mixed in with gravy, the rats may not notice the onions and accidentally eat them.

For the most part, rats know that onions aren’t something they’re supposed to be eating. They avoid them when they can.

Onions also taste very strong. Therefore, your rat is likely to stop after a bite or two.

Rats may like cooked onions, though. Cooking removes much of the toxins from onions and makes them smell a bit better. The sweetness of the plant comes to the foreground, which rats are usually much more accepting of.

Some rats are drawn to cooked onions, while others still won’t eat them. There is no reason to encourage your rat to eat onion. If they don’t like them, it’s definitely for the best!

It mostly depends on how sensitive the rat is to the smell. Some are extremely sensitive to the scent of onions, while others don’t mind them once they’ve been cooked.

Are Cooked Onions Okay for Rats?

The cooking process reduces the number of toxins in the onion. Rats are allergic to the sulfur in the onion. Cooking removes much of it from the bulb, making it much safer. This substance is also why raw onions smell so strongly.

Therefore, cooking onions reduces the chance that it’ll harm your rat and may encourage them to eat them. However, some rats are sensitive to even a little bit of sulfur in the onion. These rats probably won’t eat onions no matter what you do.

If your rat sneaks some cooked onions, you likely don’t have anything to worry about. There isn’t enough sulfur in these onions to matter much!

However, cooked onions are often very high in calories. Usually, these onions are cooked in additional oil and fat, increasing their fat content substantially. We don’t necessarily recommend them as a snack for this reason.

The high-fat content can quickly lead to obesity if they are fed regularly.

We also don’t recommend these onions for rats that have liver problems or are already obese. Let’s not make their current situation even worse!

Are There Any Potential Health Benefits of Onions for Rats?

There is little evidence on whether onions have any health benefits for rats.

Raw onions are toxic, so the likelihood of death is likely to outweigh any potential benefits. After all, if the onion may kill your rat, it doesn’t matter if it provides any separate benefits!

However, cooked onions aren’t nearly as toxic and may be fine for some rats. Their high-fat content does make your rat more prone to obesity, though.

Some rat owners claim that onions have the same benefits for rats as they do for people. However, just because small amounts of onion are good for us doesn’t necessarily mean good for our rodent friends.

Currently, we don’t recommend feeding your rat onions for any reason. There isn’t any evidence to support the practice.

Instead, choose healthy fruits and veggies that we know are good for rats. These foods are likely to beat out fatty onions any day.

The symptoms from eating green onions are just likely not to be as severe. It would take many green onions to kill a rat – probably more than they could reasonably eat.

However, green onions are technically toxic and should therefore be avoided.

Technically, yes. The onion’s sulfur content is very low after cooking, so the plant likely won’t cause any issues for your rat. Some rats may even try to eat caramelized onions since they don’t smell nearly as strangely.

Caramelized are also high in sugar, which rats naturally like. This may override their instinct to avoid onions.

However, caramelized onions are very rich in calories and do not have any nutritional value. They offer very few vitamins and minerals for your rat, which makes them empty calories.

Therefore, we do not recommend providing them to your rat often – if at all. They may be an occasional treat, but they should be avoided most of the time.

Rats should avoid eating onions as they are high in sulfur, which is a toxin. If rats overeat, it can potentially kill them, though rats would have to eat a lot before this became a problem.

Even a little bit can cause upset stomachs and other issues, though. Rats cannot vomit, so there is no way for them to remove this toxin from their body once it gets there. We don’t recommend feeding your rat any onions, though it would take a bit for them to experience severe side effects.

With that said, rats aren’t likely to eat onions. They smell very strongly, and most rats find the smell pungent enough to stay away. Rats often won’t eat onions even if you offer them.

Onions are a great way to keep rats out of a garden or another area. They will often avoid areas that smell like onions altogether.

Cooked onions are a slightly different story. The cooking neutralizes much of the sulfur and makes the onion smell better. Therefore, these rodents are more likely to eat cooked onions – but they are also less toxic.

We don’t necessarily recommend feeding cooked onions, though. They aren’t very nutritious and tend to be very high in fats and sugar.

Can Rats Eat Cucumber? What You Need to Know!