Do Squirrel Monkeys Make Good Pets? What You Need to Know! 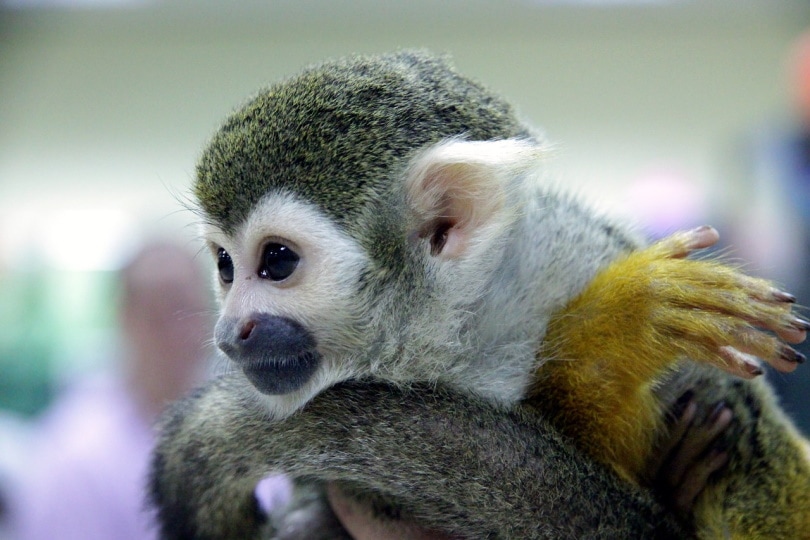 Disclaimer: PetKeen does not endorse or encourage keeping squirrel monkeys or other non-human primates as pets. This article is for informative purposes only.

Squirrel monkeys are some of the cutest animals you can find. These animals are native to the tropical forests of central and south America and stand a little over one foot tall. It has a white and black face that gives it the Deaths Head name in several German languages. Scientists often use it in experiments, and it has even gone to space. Trappers often catch it for the pet trade, which leaves many people wondering if they make a good pet. Unfortunately, Squirrel monkeys do not make good pets, so keep reading while we explain why not and if it is still possible to own one.

Owning wild animals like the Squirrel monkey is increasingly frowned upon and illegal in many states, so we recommend checking your local laws before seriously considering getting one. While the majority of states will not allow it, some states still do.

Squirrel monkeys were popular during the 1960s and 1970s because of their attractive appearance, but people discovered that they don’t make good pets. Squirrel monkeys are social pets that can live in large groups of 500 or more in the wild, so most experts recommend keeping at least two of them so while you will have double the fun, you will also have double the trouble.

How Do I Get a Squirrel Monkey?

As we’ve just mentioned the best, and least expensive way to obtain a Squirrel monkey is to check around at your local animal shelters. Quite frequently, they have one that someone else didn’t want, especially if you live near a large city. Obtaining one at the local shelter is not only much less expensive, but these pets often come with the required vaccinations, and you will be freeing up recourses that can go to help other animals in need.

If you don’t want to purchase from a breeder or there are no Squirrel monkeys available, you will need to look online for a reputable breeder that sells captive-bred monkeys and does not deal in the illegal pet trade. You can expect to pay between $2,000 and $4,000 for each Squirrel monkey.

As you can see, Squirrel monkeys do not make the greatest pet and are probably best left to live in their natural environment. If you have a love of these animals, a large budget, and plenty of time to spare, many owners have found success with a large outdoor enclosure, like one that you might find at a petting zoo, where you can raise several monkeys. Most people who try to keep these animals in their homes take them to an animal shelter once they realize how hard it is to care for them.

We hope you have enjoyed reading over this short guide, and it has helped answer your questions. If we helped you learn more about this exotic animal, please share our look into if Squirrell Monkeys make good pets on Facebook and Twitter.

Are Ball Pythons Poisonous? All You Need To Know!

Cute Frogs: 9 Pictures That Will Make You Happy