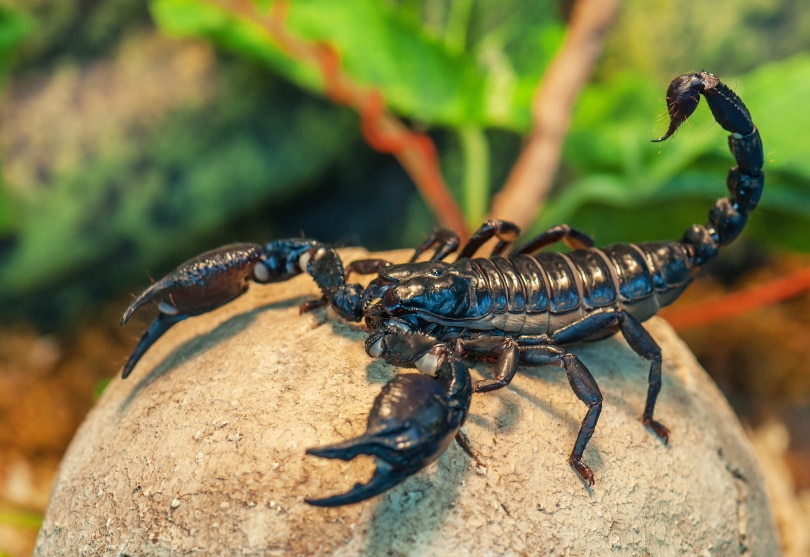 Whether you’re moving to Las Vegas or just taking a trip to Sin City, out in the desert, invertebrates invading your space are an eventuality. Instead of burying your head in the sand and pretending that they don’t exist, it’s best to get a better understanding of what you might run into out there.

That’s why we came up with this guide to walk you through the four most common scorpion species that you might find in and around Las Vegas.

The bark scorpion is the most venomous scorpion found in the United States, and you don’t want to mess with their sting. While it usually isn’t deadly, it still often requires medical attention, especially for children or elderly individuals.

While these scorpions prefer to stay out in the desert, they’re nocturnal, so they come out at night and need to find cool places to hang out during the day. Since they prefer cool and covered places, you need to check your shoes in the morning to ensure that one didn’t curl up there for the day.

The bark scorpion has extremely poor vision and gets aggressive when they feel threatened, so if you come across one in the wild, it’s best to leave them alone.

Not only is the most poisonous scorpion in the United States found in Vegas, but the largest native scorpion also is! The desert hairy scorpion can grow up to an impressive 7 inches, but they’re not a scorpion that you need to worry about too much.

They’re a bit aggressive and territorial, but they’re not considered dangerous to humans. Many people compare their sting to a bee or wasp sting in pain level, so a little localized swelling is all that you should expect if you get stung.

With the desert hairy scorpion, the old mantra holds true: It’s not the large scorpions that you need to worry about.

There are few scorpions more aggressive than the striped tailed scorpion. These feisty little predators might not look like much, but they have no problem trying to sting a much larger foe.

These aggressive tendencies are a large reason that many people refer to them as the “devil scorpion.” But while they’re overly aggressive and have venom that can be deadly to smaller animals, they’re not considered dangerous to humans, just more of a nuisance.

If you get stung, you might have localized swelling, but there’s a much better chance that you won’t feel anything beyond the initial sharp pang of pain.

While the emperor scorpion isn’t native to Nevada, that didn’t stop them from thriving once a few were released there. You’re less likely to run into an emperor scorpion in Las Vegas than most other scorpions, but they’re certainly around.

These scorpions are relatively harmless, though getting stung by them can hurt. While all scorpions can be a bit territorial and defensive, the emperor is actually among the more docile species.

So, while these scorpions might look a bit intimidating, they’re actually the one that you’re least likely to run into problems with when you’re in Vegas.

How to Prevent Scorpion Infestations

The best way to keep you and your family safe in Las Vegas is to keep scorpions from coming into your home or yard to begin with. Luckily, there are a few things that you can do to make your home less hospitable for scorpions!

Seal any openings into your home

When you’re sealing openings, keep in mind that scorpions can climb vertically up almost any surface. Windows and doors are common entry points, so install door sweeps and screens on all windows and doors to help keep these pests out of your home.

Clear away all brush and hiding places

Scorpions are nocturnal, and when the day begins, they like to hide under whatever they can find to stay cool. By removing anything that they can hide under during the day, you can make your yard less hospitable to scorpions, which reduces the chances of them coming around.

Keep firewood at least 30 feet away from your home

While you can remove brush and other hiding places, firewood might be a necessity for your home. If that’s the case, store it at least 30 feet away from your home.

You’ll still have to be careful when grabbing firewood, but you drastically reduce the chance of them working their way into your house.

Everyone needs a drink of water now and again, including scorpions. Water is a hard resource to find in the desert, so if you have standing water anywhere on your property, it’s sure to attract scorpions and other wildlife.

Get rid of other insects

Just like scorpions need water to survive, they also need food. So, if you have conditions that are ideal for crickets or other scorpion food, it’s only a matter of time until scorpions come around to gobble some of them up.

How to Get Rid of Scorpions

While it’s much easier to prevent a scorpion infestation from taking root to begin with, getting rid of them requires many of the same steps.

Keep in mind that scorpions can live up to 12 months without food, so removing standing water is the most important thing to do. However, if you can’t get your scorpion population under control by yourself, you might need to consult the help of a professional.

This is especially true if you have bark scorpions in your home or property, as a few stings can lead to multiple trips to the emergency room or kill other pets in the home.

Keeping a Scorpion as a Pet

While owning a pet scorpion certainly isn’t for everyone, they’re relatively easy to care for if you are looking to keep one as a pet. Just know that you’re not getting a domesticated animal, and they won’t ever tolerate handling well.

You can keep any scorpion as a pet, but for an option like the bark scorpion, you need to be incredibly careful because of how venomous they are.

Also, keep in mind that pet scorpions tend to live up to 15 years because they don’t deal with any predators, so you won’t be making a short-term commitment.

They don’t need large enclosures, but they do need a locking lid because they can easily escape otherwise.

While you don’t need to worry about most scorpions, keep in mind that the larger the scorpion is, the less likely that it can kill you. Still, scorpions are incredibly aggressive, so they’re not a pest that you want to keep around even if they can’t hurt you.

But with only a few scorpion species commonly found in Las Vegas, there’s no reason that you can’t quickly identify what’s in front of you in case you do get stung!

Do Finger Monkeys Make Good Pets? What You Need to Know!

Can Parakeets Eat Raspberries? What You Need to Know!