8 Lizards Found in Illinois (with Pictures) 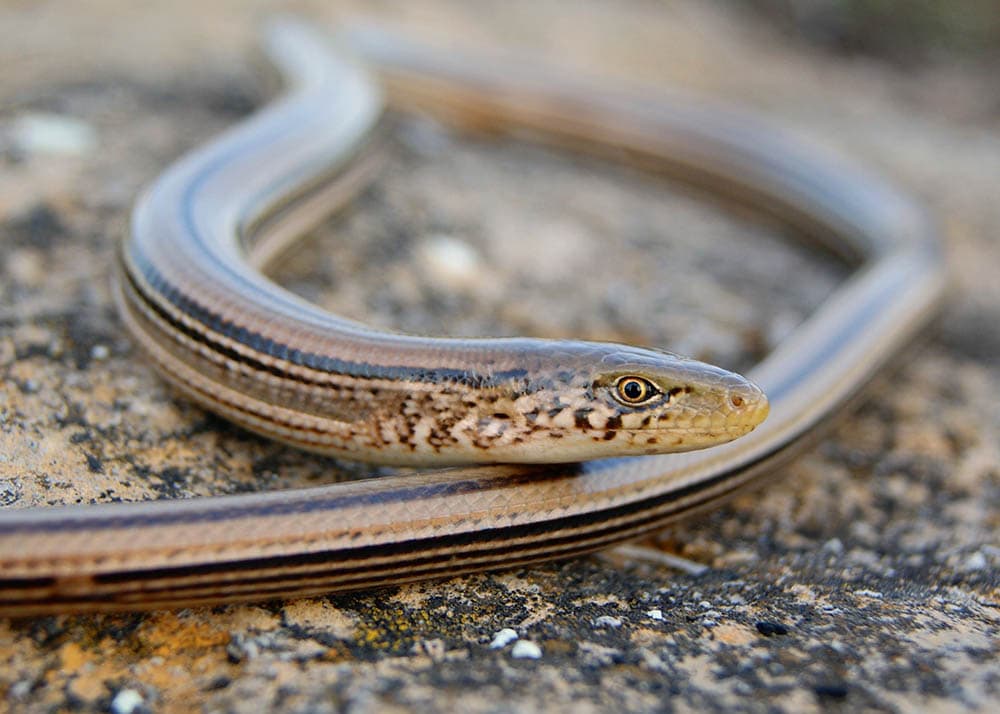 Illinois is home to 6 native lizard species, from the large Slender Glass lizard to the small Little Brown skink. No poisonous lizards roam the fields and forests of this state but there are two non-native species to found, one of whom is considered invasive. Here are the 8 lizards found in Illinois.

The largest and longest lizards in Illinois, slender glass lizards are legless reptiles, often mistaken for snakes. They are usually brownish-yellow in color, with long, dark stripes down their backs. Slender glass lizards live in dry areas of Illinois: prairies, fields, or open woods. Carnivorous by nature, their diet consists of invertebrates, including insects and spiders, other reptiles, and sometimes young rodents. Any carnivorous mammal and hawks prey on slender glass lizards. As a defense mechanism, the tail of a slender glass lizard breaks off when grabbed, a trait that earned them their common name.

Eastern Fence Lizards are sturdy, rough-scaled lizards, gray to brown with dark stripes on their back. Their bellies are white with blue-green color on the edges and they have blue throats, especially bright in males. In Illinois, these lizards live in open, wooded, rocky areas. They spend a lot of time in trees, especially when escaping danger. Eastern Fence Lizards eat a variety of spiders, insects, and other invertebrates. They are mellow lizards, making them easy prey for numerous predators, including snakes, birds, bigger lizards, and even dogs and cats.

The Common Five-lined Skink prefers wooded habitats and is often seen hiding under logs or scooting up trees. The coloring of these lizards varies by age and sex. Females and young skinks of either sex are brown, gray, or black with 5 yellow or white stripes down their backs and sides. Young skinks are easily recognized by their bright blue tails. Adult male Five-lined Skinks often lose their stripes and may have reddish-orange heads. All ages of Common Five-lined Skinks eat insects and spiders. Their main predators are small mammals and birds of prey.

The smallest lizard species in Illinois, Little Brown Skinks are light to dark brown, with white bellies, and one dark stripe down each side. Their usual habitat is anywhere they can hide and blend into dead leaves on the ground, primarily forests. They eat a variety of small insects and spiders. Because theyʻre so small, Little Brown Skinks have many natural predators, including snakes, birds, cats, and sometimes even large spiders. Little Brown Skinks rely on distraction to survive predators. Their tails break off when grabbed but keep moving, drawing attention away as they make their escape.

After the Slender Glass Lizard, Broad-headed skinks are the largest lizards in Illinois. Except for size, these lizards look remarkably similar to Five-lined skinks. They are gray, brown, or black with 5 stripes and young Broad-head skinks also have blue tails. Adult males typically develop orange heads. Broad-head skinks eat the usual mix of insects and spiders, but because of their size, they may also eat other lizards and even small mammals. Found primarily in wooded habitats, Broad-headed skinks are often found climbing trees. Birds, larger snakes, pet cats, and some other small mammals will prey on broad-headed skinks.

A large, non-native lizard species, Eastern Collared Lizards, native to the southwestern U.S.,  were introduced to Illinois in the 1990ʻs. Currently, their range is confined to one county in southern Illinois, so they are not considered an invasive species. Eastern Collared lizards are green, blue-green, or yellow, usually with spots on their backs. Their throats are orange or yellow, with two dark collars on the back of their necks. Their usual habitat is rocky cliffs, ledges, or forest clearings. Eastern collared lizards hunt insects and other, smaller lizards while dodging their main predators, snakes, and hawks.

Mediterranean Geckos are a small, invasive lizard species first introduced into the southern United States. Because they reproduce quickly, these geckos spread northward and into Illinois. Mediterranean geckos generally live around humans, often even in houses. They are nocturnal and eat a variety of insects. Because of their small size, they are hunted by many predators, including snakes, large spiders, rats, birds, larger lizards, and cats. Mediterranean geckos are tan, gray, or white and covered with dark and light spots. They have sticky toe pads, unlike native lizards. This invasive species competes with native Illinois lizards for food sources.

These 8 lizards are found in a variety of habitats throughout the state of Illinois. They are an essential part of many ecosystems, both as predators and prey. Hunting and observing wild lizards can be a fascinating and educational experience, and several of these lizards make excellent pets as well!

Elizabeth Gray is a lifelong lover of all creatures great and small. She got her first cat at 5 years old and at 14, she started working for her local veterinarian. Elizabeth spent more than 20 years working as a veterinary nurse before stepping away to become a stay-at-home parent to her daughter. Now, she is excited to share her hard-earned knowledge (literally–she has scars) with our readers. Elizabeth lives in Iowa with her family, including her two fur kids, Linnard, a husky mix and Algernon, the worldʻs most patient cat. When not writing, she enjoys reading, watching all sports but especially soccer, and spending time outdoors with her family.

4 Lizards Found in Michigan (with Pictures)

4 Lizards Found in Oregon (with Pictures)