Can Parrots Drink Milk? What You Need to Know! 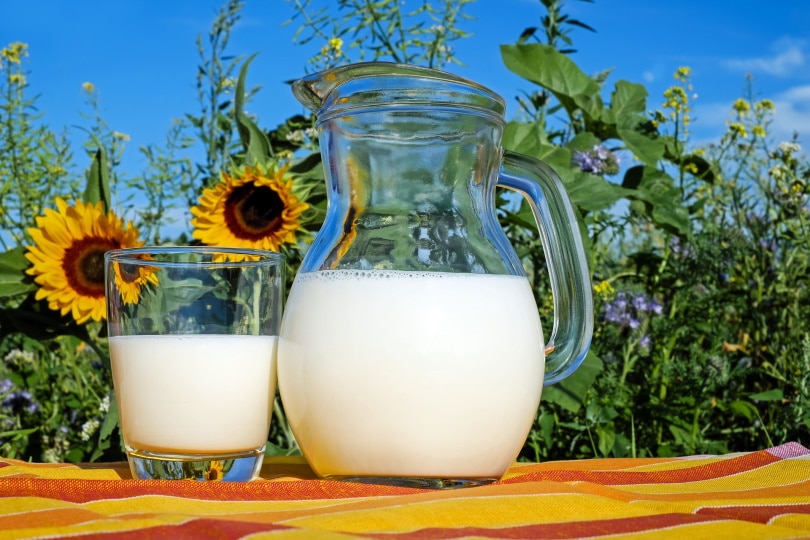 Milk is not technically toxic to parrots. However, many parrots are lactose intolerant. If they eat milk or other dairy products, they may develop stomach upset and diarrhea.

While diarrhea isn’t usually deadly, it absolutely can be. Birds are also very bad about cleaning themselves off, which can pose difficulties for bird owners. In some cases, diarrhea can lead to other side effects as well.

The amount of dairy your bird eats matters. A small amount of milk may not hurt a larger parrot. However, even a taste may hurt smaller birds.

Not every dairy product contains lactose. Many kinds of cheeses and yogurts don’t, for instance. However, milk typically does unless it is made from something like nuts. We’ll dive into the ins and outs of serving milk to your parrot friend.

Is Milk Good for Parrots?

Milk is not typically good for parrots as it contains lactose, and most parrots are lactose-intolerant. Therefore, they will respond poorly to dairy milk.

Milk isn’t traditionally considered “toxic” like some other foods. It doesn’t contain anything that will directly harm your bird. While lactose may upset your bird’s stomach, it usually isn’t deadly. However, some birds can develop complications if they have too much diarrhea, which may occur with long-term lactose consumption.

On top of containing lactose, milk is also high in fat. Parrots don’t need a diet high in fat in the least, so milk usually isn’t a good choice. It may be used occasionally as a treat, though we don’t recommend it.

There are many snacks and treats out there that are better for your bird. We recommend choosing one of these instead, but when it comes to beverages, we recommend fresh water above all else.

Once upon a time, the only milk available came from animals. Today, this primarily includes cow milk, though some localities still drink sheep milk to some extent.

Today, we also have milk from a variety of different plants. Soy milk is one of the most common options that fall in this category. However, there are also other options out there, like almond milk.

Many of these do not contain lactose, so they don’t lead to the common problems that cow’s milk does. We’ll discuss some of these types of milk below, as well as whether or not they are a good option for your parrot.

Chocolate milk is cow’s milk that has various sugars and other things added. Parrots do not need a diet high in sugar, and this type of milk still contains lactose.

Chocolate is also toxic to many birds, though the amount in chocolate milk probably isn’t going to do much. Still, there is no reason to take that chance. Chocolate milk is arguably worse for your parrot than regular milk.

Regular milk may perhaps be okay for some birds in small amounts, but chocolate milk should be avoided as much as possible. It should be kept out of reach. If your bird accidentally consumes chocolate milk, you should call your vet right away. The caffeine in chocolate combined with lactose can cause severe issues for parrots.

Can Parrots Have Soy Milk?

Soy milk does not contain any lactose, so it may be a good option for some parrots. However, there aren’t many benefits to feeding your parrot soy milk. Therefore, we don’t recommend it for most parrots.

Parrots are smaller than people and need every bite to count if they’re going to be healthy. Soy milk doesn’t include many nutrients they need. It may be a bit high in fat and protein as well. For the most part, parrots should be eating veggies and fruits – not soy milk.

Non-organic soy milk may also contain high levels of pesticides. Soy contains some of the highest concentrations of pesticides out of any other plant.

Pesticides often don’t have huge effects on people because we are so big. However, they can harm our parrots. After all, they’re much smaller than us!

Can Parrots Have Coconut Milk?

Coconut milk is better for parrots than other types of milk, but that doesn’t mean that it’s healthy. It is often remarkably high in calories, most of which are from fats.

Parrots do not need a high-fat diet. Too much fat can lead to obesity and other issues. In the wild, these birds would eat very little fat. While seeds are a part of their regular diet, these natural seeds are typically not very fat-heavy. They are not sunflower seeds or other types of seeds humans typically eat.

Coconut milk may make a fine treat occasionally. However, you shouldn’t feed it to your bird regularly. We don’t recommend seeking out coconut milk to give to your parrot.

But if you happen to have some lying around, a taste probably wouldn’t hurt!

We recommend avoiding coconut milk in cans, especially if you plan on feeding it to your bird. BPAs and other chemicals from the can could potentially leak into the can, potentially harming our birds.

A small amount of BPA may not hurt people – but our birds are much smaller. It doesn’t take quite as much for them to start developing side effects.

Can Parrots Have Flavored Milk?

Beyond your typical chocolate milk, you can also find an array of flavored milks on the store shelf today. However, all of these flavored milks usually have a very high sugar content. Therefore, they are not recommended for parrots.

Sugar won’t kill your parrot outright. It isn’t toxic, after all.

However, large amounts over time can lead to health problems. Sugar doesn’t contain many nutrients, but it is calorie-dense. Therefore, it fills your bird up without providing them with any vitamins or minerals.

Over time, this can cause malnutrition.

Sugar can also raise the overall calorie content of milk. It can quickly shove out other, more nutritious foods from your pet’s diet.

Obesity is also a possibility, which can then lead to an array of different side effects.

Can Parrots Have Almond Milk?

Almond milk does not contain any lactose. Therefore, it is a bit better for your parrot than other options out there. It won’t make them nearly as sick as cow’s milk.

However, it also isn’t very healthy for birds. It is high in fats and calories, without providing any of the nutrients parrots need. Therefore, we recommend choosing a more nutrient-dense option for your parrot.

Some almond milk may be okay as an occasional snack. However, that doesn’t necessarily mean that it’s the best treat out there!

What Drinks Can a Parrot Drink?

Preferably, your parrot should be given chiefly water. That’s the healthiest drink for them. It doesn’t fill up their diet with useless calories, but it does keep them hydrated.

When they drank, birds would only have access to water in the wild, so it is often the best option in captivity.

Some fruit juices don’t have added sugars and may be an okay option for your parrot. However, even these fruit juices will have calories that your parrot should preferably be spending somewhere else.

Fruit juices lack a lot of the nutrients that whole fruits commonly have. They are also entirely missing any fiber, which is a vital part of your parrot’s diet. Fruit juices should only be offered occasionally, if at all.

Be sure to check the ingredient list before deciding to give your bird fruit juice. If added sugar is included (or any other suspicious ingredients), it is probably a good idea to skip it!

Milk isn’t toxic for parrots, but that doesn’t make it a good option either. Cow’s milk contains lactose, which our birds can’t digest properly. They did not evolve with the enzymes needed to digest this protein, making them sick.

Diarrhea and stomach upset are common after parrots drink milk. The exact symptoms will vary from bird to bird. Typically, the more milk a bird drinks, the worse its symptoms are.

Larger birds can usually handle more milk than smaller birds. However, there are exceptions to this rule. Some larger parrots quickly develop symptoms after consuming milk, while some smaller birds may handle more.

Milk alternatives are sometimes safer than cow’s milk. Almond and soy milk are both lactose-free, for instance.

However, these alternatives are still relatively high in fat and low in nutrition. We recommend choosing more nutritionally dense snacks for your parrots.

Milk doesn’t contain the macronutrients they need to thrive.

Chocolate milk and other flavored milks should be avoided due to their high sugar content. Chocolate is also toxic to parrots, so chocolate milk should be strictly avoided.

Can Rats Eat Bananas? What You Need to Know!