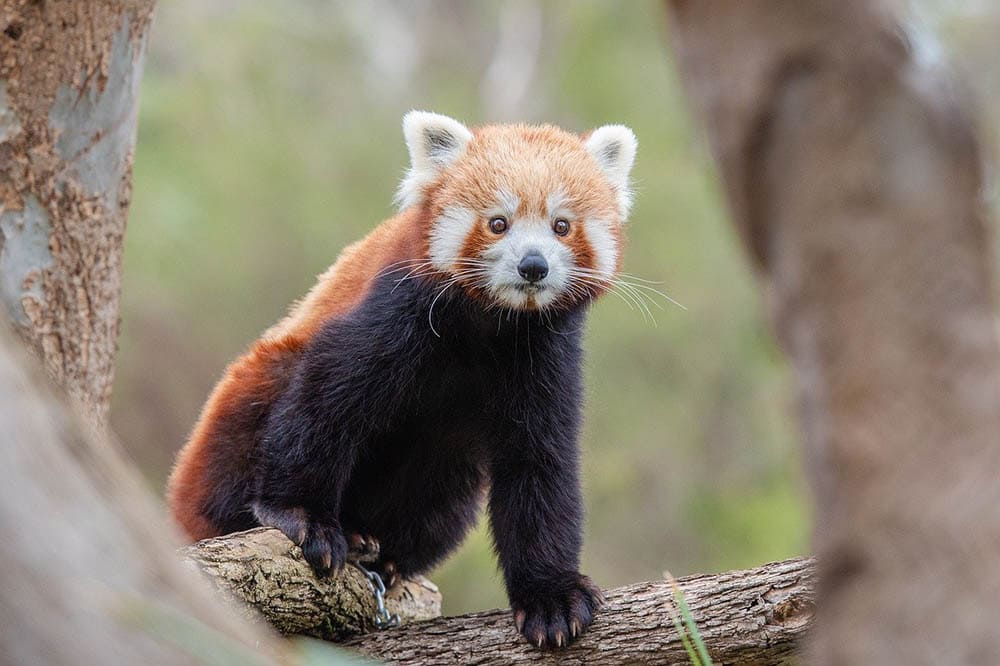 Red Pandas are adorable creatures that are loved by many, but it’s hard to tell what they actually are. They look like a mix of a raccoon, fox, and bear, but they’re slightly larger than a cat. Their trademark brick-red fur, white faces, and large, pointed, furry ears often delight anyone who sees them. Native to the Eastern Himalayas and Southwestern China, Red Pandas have become endangered due to poaching for their fur, the illegal pet trade, and the loss of their natural forest habitat.

Red Pandas are truly unique and completely adorable, so naturally, people have wondered if they can be kept as pets. Unfortunately, black market smugglers have led to the decline of this beautiful animal’s population. Purchasing a Red Panda is illegal, and this species is protected by law in their natural habitat. We do not suggest ever keeping a Red Panda as a pet, for all of these reasons and more.

Why You Should Not Keep a Red Panda as a Pet

Videos on social media sometimes show wild animals being kept in captivity, as pets or otherwise, making people wonder why they can’t have one of these animals too. The origins of these videos aren’t always clear. Sometimes, the animals are obtained illegally or have been captured from the wild. Other times, what you’re seeing is actually a rescue or wildlife sanctuary, where the animals cannot be released back to the wild and survive on their own. If you see a video of a Red Panda in captivity, it can seem like this animal would make a wonderful pet. This is simply not true.

Aside from being illegal and something that we never suggest or support, keeping a Red Panda as a pet is detrimental to their health. Even the most rambunctious dog or cat is nothing like having a Red Panda in your home. Made for the outdoors, these animals have long claws to help them climb trees. These claws stay sharp, so you and your home are at risk for major damage. These animals also possess an anal gland that releases a horrible smell whenever they’re upset or feel threatened. This smell is not a pleasant one. They use the same scent to “mark” their territory. If you force that territory to be your home, the Red Panda is going to do what they know to do, whether it’s on trees in the wild or your couch.

The Red Panda’s diet is made up of fresh leaves and bamboo, things that aren’t accessible to them in captivity. It would be nearly impossible for a person to provide the type of diet that this animal needs to be healthy. When Red Pandas are kept in homes, they suffer a great deal. Their coats are too warm for indoor environments. Their natural behaviors, like climbing and foraging, aren’t possible. Their natural lifespan is around 23 years. Their unhappy lives are cut drastically shorter by misery and poor health in captivity.

Naturally solitary animals, Red Pandas spend most of their life alone except for breeding season, when they will seek out potential mates. They are not social creatures. This also applies to humans The Red Panda doesn’t want the company of other animals and it doesn’t want your company either.

Reasons for Conservation of the Red Panda

The Red Panda is the only animal in their family, “Ailuridae.” This means that if they’re gone, they’re gone forever. There is no other animal like the Red Panda, and the ecological impact of their absence would cause greater problems than just the devastation over the loss of this creature.

Their presence is studied by biologists to determine the health of their habitat. By conserving the Red Panda’s natural habitat, other species also benefit from conservation, such as a variety of different birds and the Himalayan Black Bears. Red Pandas bring balance to the ecosystem. If Red Pandas are extinct, the lives of their natural predators are in danger too. In addition, Red Pandas feed on fresh bamboo. If they weren’t around to naturally control the bamboo plants, the forests would be overrun with it. This could affect the ability of other important plants in the forest to grow.

It can be a natural reaction upon seeing a Red Panda to say, “I want one!” They’re approximately the size of a domestic housecat, and you might think that they’d make a fun, exotic pet. However, the Red Panda is wild and does not make a good pet. They don’t want to be pets either. Endangered already because of poachers and black market smugglers, these animals are being conserved and protected by the law in their natural habitat. By keeping this animal as a pet, you’d also be breaking the law. It’s illegal to possess a Red Panda. It’s best to leave these remarkable creatures to their natural habitat to eat bamboo and climb trees by themselves all day. By saving this species, we can also help save others and their natural habitats.

Do Goats Make Good Pets? What You Need to Know!